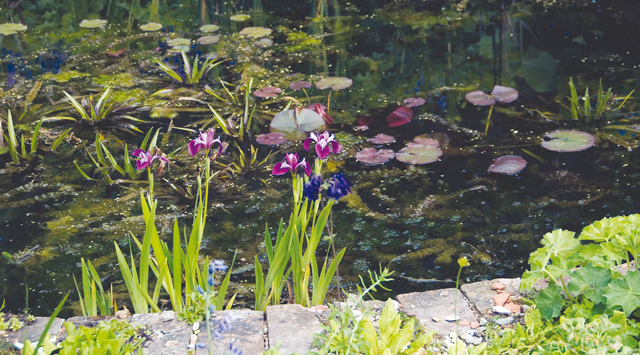 The flowering of Fotherby

Steffie Shields explores three gardens opening in aid of St Andrew’s Children’s Hospice, Grimsby. Since the nineteen sixties’ Beeching cuts led to the closure of Fotherby Hall Halt on the Eastern Railways Louth to Grimsby line, and then the A16 bypass, built in 2002, Fotherby, a village on the eastern edge of the Wolds just north of Louth, has relaxed into a quiet rural haven off the beaten track.
It would be well worth looking up Fotherby on Google, packing the family into the car and reaching for your sat navs to go and explore three very different gardens open this month, in aid of St Andrew’s Children’s Hospice.

Recently, Ann and Bob Armstrong invited me over to explore the trinity, or trio, of Fotherby gardens opening their gates for charity on Sunday, August 28th. The drive across the hawthorn-bedecked Wolds, in one of the best springs I can remember, went some way to offer recompense for the hardest of winters. Ann mourned one or two exotic trees and shrubs, lost or badly affected by the big freeze, as she showed me round their garden first, beyond the four-square red brick Edwardian house (dating from 1907) tucked near the end of Peppin Lane. After eleven years of Armstrong nurture, Woodlands is clearly a horticultural treasure trove and haven for wild-life, with not an inch of bare soil; every corner packed with a plethora of plants and evergreen ferns.

A passionate plants woman, Ann runs her own nursery, www.woodlandsplants.co.uk, and is very interested in propagation, growing everything from the garden or from seed. Little wonder that Woodlands is open under the National Gardens Scheme five times a year. This is the place to learn expert plant association. Before heading off into the woods I stole an admiring, fleeting glance at a spreading multi-stemmed Cercis canadensis ‘Forest Pansy’; its shiny, deep purple, heart-shaped leaves just emerging, underplanted with deep violet blue spears of Siberian iris, miniature lilac and starry orbs of purple alliums. A huge variety of shade-loving species (for instance, a collection of thirty-five different Epimediums) make for eye-pleasing ground cover in dappled light, under a canopy of mixed mature coniferous and deciduous trees. Within view from the house, pencil cypress and cedars somehow sit happily alongside birch and apple trees; some, such as ‘Grandma Lock’s’ tree, dating from the thirties. In front of this densely textured backdrop, Ann has woven an array of herbaceous borders and shrubs into a living tapestry. A feature ‘flint garden’ or scree rockery to halt you in your tracks near the conservatory shows off unusual plants dotted around informally, including a miniature, almost navy blue, Meconopsis pratii obviously enjoying the drainage. The gravel mulch sets off, and makes it easy to peruse, each individual (often rare) plant.

As we negotiated the trail of narrow bark paths through the wood, I mentioned that the garden reminded me of Crûg Farm Plants, a nursery in Wales run by the celebrated modern-day explorers and plant collectors, Sue and Bleddyn Wynn-Jones – who won a Chelsea gold this year on their first attempt. No coincidence! Ann told me that she sources plants from them, from their travels to remote parts of the world. She weaves her own magic to great effect, using any spare logs to create informal raised beds and pergolas to display plants in a very pleasing, natural way. I stopped to inspect a clump of native red and yellow Lady’s Slipper orchids, Cypripedium calceolus. Seeing the small vibrant red species tulips, Tulipa sprengeri, rising above lime-green clouds of wood spurge, Euphorbia ‘Fens Ruby’, and bluebells was uplifting; opposite, in a clearing, was a stand of nodding large heavenly blue poppies, Meconopsis ‘Lingholm’, a hybrid perennial with bristly buds and leafy stems. Ann undoubtedly shares her husband’s artistic eye. An award-winning professional landscape artist, his pantile-roofed studio sits happily in a tranquil corner near the pond, adding another agreeable dimension to a garden visit. Bob’s work reflects man’s influence over the landscape overtaken by nature reclaiming mines, quarries and old stone cottages; rather than the woods, he prefers to paint the spectacular, wilder parts of the country: the moors, mountains and coast.

With reluctance, I tore myself away from a delightful horticultural master class, as Roger Chester kindly offered to drive me further up the lane and along a chalky white farm track cutting through acres of rape. In 2005 Judith and Tim Hunter moved to Nut Tree Farm, living for the first eighteen months in a caravan as they worked improvements! There were only a few hazelnut hedges and fruit trees – pear, plum and greengage. The open location of their new garden, with sweeping lawn, young lime trees on the drive and raised gravel walkway by the house, could not be more different from Woodlands. Exposed to all four winds, this is a challenging site to garden; yet the vistas, an idyllic view of Fotherby in the valley, St Mary’s Church spire, and a stunning Lincolnshire Wolds panorama across patchwork fields, are well worth exploiting. Judith converted crew yard into a ‘designer potager’ sloping beyond the house, with neat raised beds, regimental vegetables, brick walling and an ironwork arch purposely framing a distant clump of beech on the horizon and a mirror pond in the foreground. Everything about this evolving garden seemed as pristine as the view; with a snaking rill, fountain and a flagpole still flying the Union Jack proudly from the Royal Wedding day, it is obviously tended diligently with loving care.

Finally, Roger drove me back down the hill to his garden set beside a stream where Barbara, his wife, was patiently waiting. (Tim will be running a shuttle service between Nut Tree Farm and Roger and Barbara’s garden). She told me that she was born and bred in Fotherby and is very proud of her grandmother, a founding member of the local WI, which is one of the county’s oldest. They moved back to the village nearly thirty years ago. Their front garden, open to the road, is so full of colour and texture, with a mature ornamental cherry tree decked with clematis and a new small brick-edged pond. A tiered theatre of planting, rich and varied, leading right up to the front door of the bungalow reminds me of my grandmother’s garden. Many folks walking past must stop, or slow to a snail’s pace driving by, to enjoy the show. An appealing narrow walkway along the stream leads past more perennials, including a collection of hostas, to the back. An arresting sentinel, a may tree, Crataegus ‘Paul’s Scarlet’, stands before another charming borrowed country view. I peeked in the greenhouse; like the garden, full of eye-catching goodies. A new wooden arbour seat, with Rosa banksiae on one side and Rosa ‘Ruby Wedding’ on the other, suggests the contentment of a long, happy marriage. So plant hunters, garden enthusiasts and dreamers, get your hats on, grab your cameras and your children, and head for Fotherby – where some of the magic may rub off!