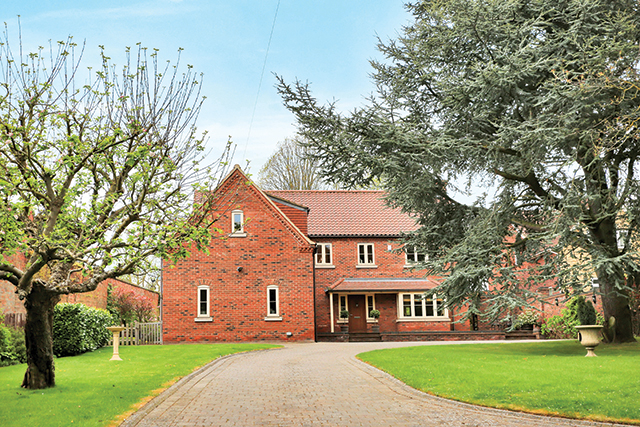 The idyllic grounds of Cedar House

The next occupants of this home will probably experience a similar idyllic first impression of the property as the current owners.

It is nearly a decade since the Dyes caught their first view of the impressive property in Burton which has been the family home for the past nine years.

“The immediate reaction was how idyllic Cedar House looked from the main road,” explained Rob, “and then driving past the eighteenth-century gate into the Walled Garden, which was covered in swathes of lilac wisteria.”

Cedar House is built on one of four plots which lie within the former two-acre Walled Garden of Burton Hall, Burton near Lincoln. The Hall (which still stands) and garden were built during the late 1700s as part of the Monson estate but the garden was sold off in the 1950s. Cedar House is on the plot which was lucky enough to retain the impressive garden gate entrance which frames the first view of the house and puts into context the modern, executive home within its half-acre heritage setting.

The first home on the plot, Cedar Cottage, built in the early 1960s was a predominantly wooden residence. The then owners began the transformation from the working Walled Garden into the delightful mature garden which surrounds the property today. In 2005 the cottage was lost to a fire and then replaced by the current Cedar House, purchased on completion of the build in 2008.

“We were looking for a property to downsize from our previous house and identified Burton village as a desirable and accessible location,” said Rob. “Once we had completed the viewing, we fell in love with the house as well as its peaceful tranquillity and as keen gardeners and outdoor types the external space offered vast possibilities to pursue these interests.”

Cedar House is a five bedroomed property over two floors which is finished to an exceptionally high standard. On the ground floor the entrance hall leads to two reception rooms as well as a utility room, cloakroom and study. Leading from reception two is a large breakfast kitchen and garden room with patio doors opening onto a paved terrace. On the first floor there are five double bedrooms, two of which are en-suite, as well as a family bathroom. In total, the living space extends to some 3,400 sq ft.

The Dyes have made further modifications to the house during their ownership including the installation of solid oak wooden floors throughout, as well as a modern alarm and CCTV system.

Externally, they have completely redesigned and landscaped the garden. A Dutch built summerhouse in a classic design is sited on one of two joining round patios at the far end of the garden; ideal as a work or entertaining space. The front garden with its block driveway is home to the elegant and mature cedar tree from which the property derives its name.

A visit to RHS Chelsea Flower Show inspired the installation of a fully automated irrigation system, which ensures the garden is always at its best, while a solid oak garden shelter has added structure to the landscaping.

Views of the garden and grounds are possible from almost every window but the Dyes’ favourite aspect is from the Garden Room where they take most of their meals. From here they can really appreciate the ever-changing seasons and unique microclimate created within the Georgian walling.

The Dyes have thoroughly enjoyed their time at Cedar House and take with them enduring memories of happiness.

“This is a delightful location which offers the benefits of being in the country, yet is within strolling distance of Lincoln’s ancient centre. The house and gardens began as a blank canvas on which we have been able to create a comfortable and low maintenance home alongside establishing a classical style and sophistication to the extensive gardens.

“Burton is a quiet and beautiful village with some eighty inhabitants. There are lovely characters here and our neighbours are friendly and courteous. The Village Estate Club has regular gatherings which present the opportunity to maintain a strong community spirit. The distinctive ancient yew hedge, the hill mounted church and the undulating landscape make owning a property in this much sought after village a complete delight.”

The Dyes’ next move will see them relocate to Nottinghamshire where they are already in the process of building another home, in Southwell. This property has an acre of mature garden so they anticipate that they will be even busier outdoors in the coming years.