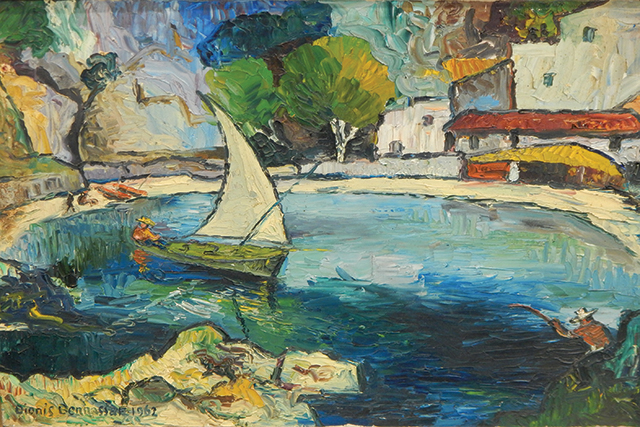 The combination of auction buyers – in the room, on the phone and bidding live online – assured a competitive evening with nearly a sell-out sale.
Top price in the auction went not to an original work of art, but a signed coloured print.

Laurence Stephen Lowry was born in the north-west of England in 1887 and went on to become one of Britain’s leading artists. His artistic style depicting industrial landscapes and working class people is unique and increasingly popular.

His original works now command millions of pounds at auction but his prints, produced from the 1960s in limited editions and signed in the margin, are commanding ever increasing prices.

Two were offered at the Lincoln Sale on Wednesday 23rd August; ‘Man Holding Child’ sold for £6,000 and another titled ‘Group of Children’ made £3,200.

An original oil painting by the Spanish artist Dionis Bennassar also featured in the sale. Bennassar was born in Pollensa, Mallorca in 1904 and his colourful style characterised by long brushwork is again easily recognisable.

Lot 9, a harbour scene, saw great interest at the auction with bidders in the room, on the telephone and online fiercely competing for the work. It exceeded its pre-sale top estimate of £2,500, eventually selling for £5,000.

Representing the more traditional works on offer was a watercolour of a West Irish landscape by the artist William Percy French (1854-1920). Telephone bidders competed for this, with the hammer finally falling at £1,400.

A bronze sculpture by the young English artist Edward Waites, born in 1988, was one of three works by the artist offered at the auction. His depiction of a lioness titled ‘On The Prowl’ was hotly contested, selling for £1,200.

Lincolnshire artists were again well represented in the auction. Top price went to the Gainsborough artist Herbert Rollett for an oil on board Lincolnshire landscape, selling for £650.