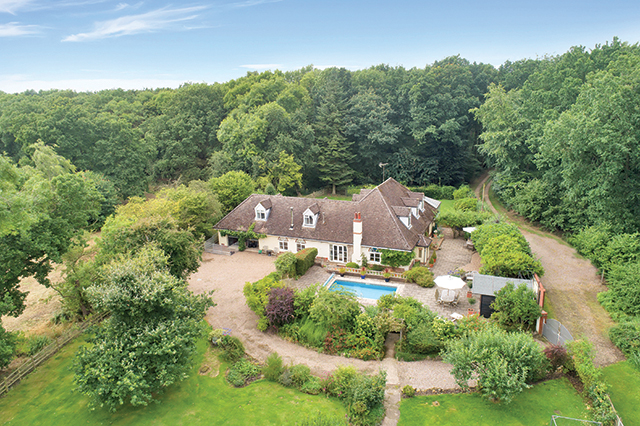 The perfect party house in the woods

When Camilla Peacock was looking for a new home eight years ago, it was a slip up on her Internet search that led her to Lincolnshire.
She and her husband Kevin initially wanted to stay nearer their home at the time in Northamptonshire. But a mistake on the distance in the search engine widened the location to Lincolnshire and their current home, Woodview on Horncastle Road, Southrey, near Bardney appeared.

Remarkably, the house has been featured in the pages of Lincolnshire Life before (August 2008) when the previous owners Matthew and Laura Sharpe had put the house on the market nine years ago.

Camilla was instantly drawn to the property as it fitted all the family’s requirements. It had no near neighbours for Camilla, plenty of garaging for Kevin and a tree to climb for their then 13-year-old daughter Olivia (now 21). In fact there were thousands of trees to choose from around the property as the house stands in Southrey Wood, one of thirteen woodland Sites of Special Scientific Interest that make up the Bardney Limewoods National Nature Reserve.

“I fell in love with the house instantly!” said Camilla. “I had to have it. Three weeks later I brought my husband and daughter to see it. It was the middle of winter, freezing cold and the house wasn’t looking its best, but they both loved it as well.”

Situated amongst the trees and with open countryside views to one side, Woodview is a five bedroomed property nestled in just under an acre of private gardens. There is a bespoke kitchen/breakfast room, dining room, living room, study, bedroom, shower room, toilet and garden room on the ground floor, whilst upstairs there are three further bedrooms, a bathroom and a self-contained bedroom with shower room. Outside there is a swimming pool with paved terrace area, a number of specimen trees, planted beds and borders, raised vegetable beds, a pond with a water feature, outbuildings and views over the adjoining farmland.

Once their offer was accepted, the family moved into the house in June 2010. The property is only a mile from Bardney and twelve miles from Lincoln. “People think it is isolated being in a wood but it isn’t,” said Camilla. “Bardney and Southrey villages are nearby and we have a great group of friends in both villages. But the house is private which is great if you have children and dogs, as they can make as much noise as they like without disturbing anyone.”

The couple set about improving the property to suit their taste. The pool was relined, a new poolhouse built and the terraces refurbished, a log burner was installed in the living room and a new black slate floor was laid in the kitchen. New plumbing, wiring and drainage was installed as and when it was needed over the years, and the house was painted in ‘mellow and muted’ Farrow and Ball colours, chosen by Camilla who used to work for an interior design company.

“The house was a work in progress,” said Camilla. “We thought we would be here forever. In fact, we used to joke that they would have to remove us in boxes!”

She added: “There is a huge amount of living space downstairs and we use every square inch of the house.”

The house has suited the Peacock family perfectly and they have enjoyed a lot of get-togethers with friends over the years. Although Olivia, who is now studying politics at the University of Nottingham, used to flexi-board at Oakham School in Rutland, she returned home frequently and has had lots of sleepovers and pool parties there with her friends.

Camilla said: “We’ve had a lot of parties here, particularly for my daughter and her friends, and the house was always full of other people’s children. They like to use it as a party house because of the swimming pool.”

On Olivia’s 18th birthday, Camilla and Kevin, who run events company KCP Associates Ltd, arranged a mini festival at the house. Camilla said: “There was camping in the garden with tents everywhere and we built a stage in a marquee, a dancefloor and had a DJ up from London. We called in a lot of favours and even had the garden lit with professional lighting.”

The family currently have three dogs – a chocolate Labrador called Ozzie, a Fox Red Labrador called Chilli and Norfolk Terrier named Alli – and enjoy long walks in the woods and the surrounding countryside with them. At one time Olivia had a horse and would ride it through the woods as well.

“We walk miles with the dogs,” said Camilla. “You can walk from our house to Woodhall Spa through the countryside by walking to Southrey, then following the route of the Withern along the water rail.

“The woods are a great spot if you like nature. There are dormice, buzzards and some rare butterflies including the Purple Hairstreak and the White Admiral; in the spring the woods are carpeted with anemones and bluebells.”

Although the couple love their home, work commitments have meant they have now decided to place it on the market.

“I absolutely adore this house and I rather envy anyone who buys it!” said Camilla. “It has been an absolute pleasure to live here and I’m very sad that we have to go.”