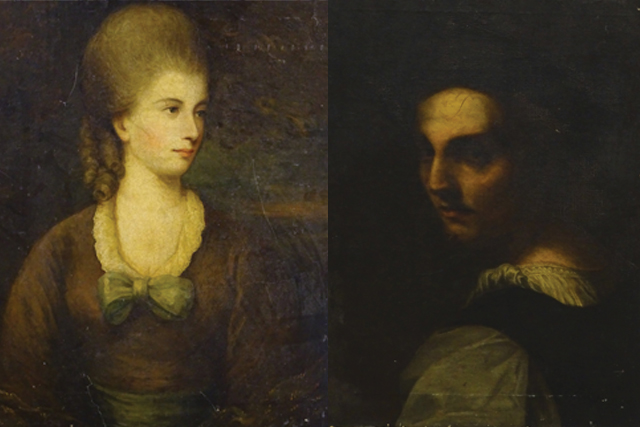 By Emily Ratcliffe MA MNAVA, Golding Young & Mawer
Before the invention of photography portraiture was the sole way someone’s likeness could be recorded. Through mediums such as oil, watercolour, pencil sketches and sculpture the sitter could display their physical attributes as well as their social and economic standing.

Portraiture is a medium that spans thousands of years. Depictions of contemporary figures feature on Roman frescos and ancient Greek pottery; statues of historical figures can be found in many public spaces and the pictorial representation of monarchs and world leaders are in many of our pockets.

Portraits have ranged from the personal, such as the 19th century vogue to create the likeness of a family member’s profile – the silhouette – to the social, with society painters such as Thomas Gainsborough (1727-1788) and Thomas Lawrence (1769-1830) capturing the contemporary celebrities and high flyers of the day.

These portraits give modern viewers an insight into our social history, from the clothes people wore and how they styled their hair, to the houses and public spaces they occupied through the backgrounds which are depicted.

In self-portraiture the psychology of the artist can also be conveyed. Vincent Van Gogh (1853-1890), for example, painted 36 self-portraits. Following his breakdown they feature a more vivid use of colour, restless brushwork and a mix of many different techniques to create a disjointed and thought provoking reflection of his state of mind: see Self Portrait with Bandaged Ear (1889) and Self-Portrait Dedicated to Charles Laval (1888).

Similarly, the Mexican painter Frida Kahlo (1907-1954) merged the personal, social and political in her self-portraits, detailing her struggles with her health and marriage, as well as the political and social climate in Mexico during the rise of communism: see Henry Ford Hospital (The Flying Bed) (1932) and Marxism Will Give Health to the Sick (1954).

Following the invention of photography, where the likeness of the sitter could be captured with precision, artists were seeking ways to represent their sitters in new and innovative ways. Pablo Picasso’s (1881-1973) work for example demonstrates a movement away from naturalism to the abstract.

Picasso’s depictions of the human form border on caricature, with angular lines replacing the soft curves of the face and bright colours overwriting more typical skin and hair tones: see Portrait of Dora Maar (1937) and Woman in a beret and checked dress (1937).

Henri Matisse (1869-1954) similarly favoured a bold style in his portraits, using collage and sculpture as well as paint to embody and define the human form: see Blue Nude II (1952).

In contemporary portraiture, the medium of film and photography has flourished, with artists such as Tim Walker (1970- ) redefining once more the concept of ‘the portrait’. Walker’s dramatic, surrealist photographs are playful and innovative, juxtaposing the human form with imagined dreamlike backgrounds.

The movement away from the faithful representation of a subject to the abstract is not only technological, but has social, political and cultural underpinnings. How this genre develops in the future will therefore be coloured by these factors.