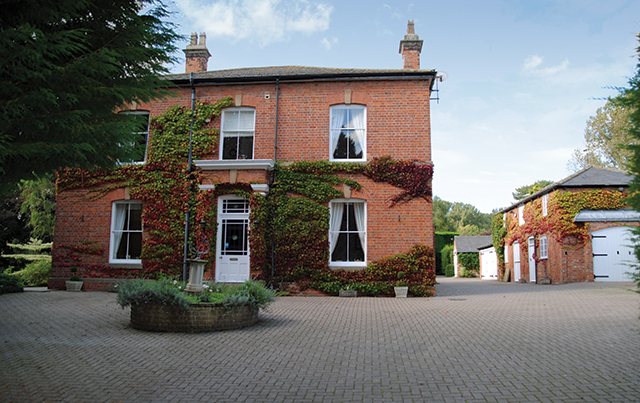 The secrets of an ideal family home

When Neil and Carole Prescott were searching for a new home, it was their children that swayed their decision.
The couple had chosen a Queen Anne property at Thornton Curtis but children Emma (now 30) and Ryan (24) had set their hearts on The Old Vicarage on Top Road, Worlaby for its proximity to their schools.

And it was a good decision, for the family have lived in the traditional Victorian property happily for the last seventeen years.

Carole remembers viewing their beloved home in Easter 1999. She said: “We brought the children on the second viewing and the house felt right as soon as we came through the front door. It felt calm and like a family home. Emma was sold on the house because it was near to her school, Sir John Nelthorpe School at Brigg.”

At the time, the family were living in a three bedroomed detached mock Tudor style house at Barton-upon-Humber and wanted a larger property and garden. After their offer on The Old Vicarage was accepted, they moved in September 1999.

The property, which along with a former coach house is situated in 0.8 acres of formal gardens next to St Clement’s Church, had been owned by the Goodwin family since it had ceased to be a vicarage in 1961 and a new vicarage had been built nearby. When Mr Goodwin died in 1989, one of the sons took on the property and in the early 1990s a lot of renovation work was carried out.

Carole said: “The house was in very good condition. We redecorated in 2006 and extended the kitchen into an outside building that we couldn’t reach from the house. We decided to knock through from the kitchen into the building and make the original kitchen into a breakfast room and the additional part into a kitchen. Then we used a joiner, Steve Dixon from Cleethorpes, to create a bespoke beech kitchen.

“At the same time, we renovated the coach house into a centrally heated den for our son, with a bathroom downstairs which would be ideal for an office space or art studio now.”

The house itself has five reception rooms on the ground floor as well as a master bedroom with en-suite bathroom and three further double upstairs. It has retained many of its original features including original fireplaces, an elegant staircase, sash windows, polished floorboards, deep skirting boards, plaster coving and ceiling roses and picture rails.

Outside, the property is approached over a tree-lined driveway leading to a block paved turning circle. The coach house features two double garages, a ground floor wet room and a games room which runs the full length of the first floor. There is a further detached garage and a vegetable garden within the grounds.

The family have enjoyed their time in the house. Carole said: “It’s been absolutely perfect for us. It’s so peaceful that you don’t have to see anybody apart from the postman.”

There are neighbours, however, as the Goodwin family built a bungalow in the grounds, on an area of land known as the Royal Gardens, for one of the sons. When he moved away, the bungalow was sold.

Carole added: “Before we owned the house, some of the land was hived off to build three houses. The people who live in the bungalow have to use the main part of our drive to reach their house and there is a property to the left but you can’t see it from our house.”

Carole is particularly fond of her garden, which she worked tirelessly to create in the early years before she developed arthritis and needed Neil’s help. Over the years, she has created lawns, beds and borders, planted fruit trees including pears, apples and plums, and made a kitchen garden with vegetables, raspberry canes and strawberry plants. The couple also created their ‘Secret Garden’ from a 30ft x 40ft spot the previous owners had used as a garden rubbish dump. They cleared the spot and created a seating area, which overlooks the fields to the rear of the house.

When the children were young and with Neil working away a lot as a mechanical engineer for the Conoco oil refinery, Carole threw herself into the village’s Parochial Church Council. She helped out at garden and scarecrow events and particularly enjoyed opening her own gardens and serving cream teas.

In more recent times, she has given up her community involvement to care for her parents Barbara and Len Huntingford, who live in Barton-upon-Humber. Currently Emma and her partner, who both run businesses, are living in North Wales and hope to join Neil and Carole in Dorset soon, and Ryan has just completed a master’s degree and is currently doing a teacher training course, which has led him back to Sir John Nelthorpe School.

With their children grown and Neil reaching retirement from his current job working between Manchester and London for Worley Parsons, the couple have decided to sell their home and move to Dorset. Carole said: “My husband is coming up to retirement and we promised ourselves, when that time came we would move to a cottage of our dreams.

“Three years ago, we began looking in Dorset and in January two years ago, we found a sixteenth-century thatched property with a lot of land and an old derelict mill in the grounds. We want to run it as a holiday let for our retirement and do the old mill up slowly.”

Of The Old Vicarage, she added: “We’ve been here for seventeen years and it’s been a delightful house to live in. It’s the longest we’ve lived anywhere and I’ve always looked forward to coming home. But it’s time to move on and now the opportunity to follow our dreams has come our way, we don’t want to miss it.”