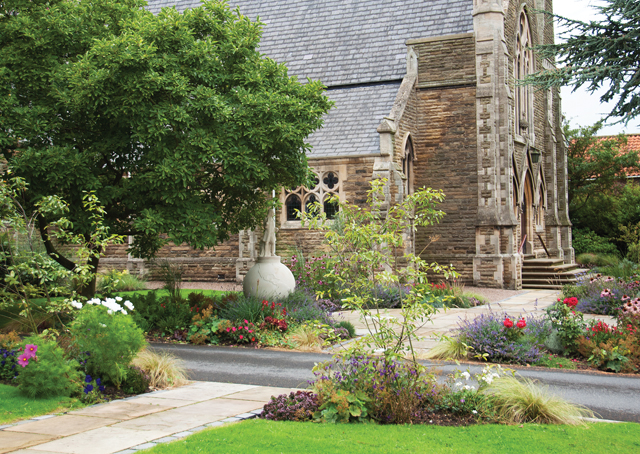 The world is my parish

Steffie Shields admires a garden transformation in Epworth inspired by John Wesley, the founder of Methodism.
When landscape architect Stephen Welch decided to move his practice to Lincoln (and to live on a houseboat called Fleur) he did not know that the road would lead to Epworth, in north Lincolnshire. Here Reverend David Leese, superintendent minister, likes to keep the door to his Wesley Memorial Church ajar to give a sense of welcome. As the congregation is equally welcoming, Steve decided to join them.

The church was founded in 1888 and built by Charles Bell of Grimsby. Despite a rock and ashlar Gothic exterior, Nikolaus Pevsner writes, ‘the interior still gives the impression of an open preaching box’; rather apposite, true to the remarkable churchman. The more Stephen looked around outside, the more he thought he could use his experience, let alone his passion, to make a positive, practical contribution to the setting.

One of his recent schemes, for Les Bourgs Hospice on the island of Guernsey, created an oasis of calm with natural materials and soothing running water; a welcome sanctuary for patients and their families. A garden, sometimes the only way we can express our caring, brings inspiration, perfume and colour, renewal and solace. Opened last year by their new patron HRH Prince Charles, Steve remembers that the royal guest was particularly taken with Buddleia ‘Pink Delight’.

For many years now, the whole effect of Epworth’s Methodist church garden has been tidy, symmetrical, perhaps municipal: the usual lawns; rectangle rose beds straddling a narrow, straight path; shrubs and a few good trees congregating around the edge; here an Atlantic cedar, there amelanchier and magnolia. The most striking feature, a veteran horse chestnut in the car park that once shaded a farmyard, is now home to Epworth’s oldest rookery. Approaching David with the offer of help, Stephen commented drolly, “All this garden is lacking is a ‘Keep off the Grass’ sign!”

He revealed his plan for the garden, explaining: “There’s something missing. At the very least, in the place of his birth, there ought to be a statue of John Wesley.” Whereupon David disappeared into his house, and rushed back out with an archive drawing. Stranger than fiction, Steve’s idea echoed an early proposal. A statue appears in an original engraving but was never made because of cost.

Church members and local councillors, comfortable with the garden, had not really given it a thought. They queried: ‘Why change the garden?’; ‘If the garden is not broken, why spend money, and effort, mending it?’

“It’s not about what you have, it’s what you could have – a more relaxing, open and useful space between the church and Epworth’s high street, the heart of the town,” he says. What’s more, he would find the necessary funding.

Less than a year later, I drove across to see the radical transformation on the greyest of days. My spirits were lifted on meeting Stephen and David, and hearing them share their enthusiasm for this revitalised space: a pleasing, gentle level emphasised by smart paving, curving walks, and a carefully considered planting palette. Purple hues, heuchera, lavender and thyme blend with silver grasses and surprising sky blue chicory flowers floating above, and contrast with the vibrant old tea-roses gainfully recycled in amongst overflowing borders.

Round the side of the church, a surprise vegetable garden – its beds edged with chunky railway sleepers, donated by Trackwork of Doncaster – also lightens the atmosphere, full of produce and sunflowers. Hence, this year David was a prizewinner at the local flower show.

This is a garden built on human kindness: a wide range of Lincolnshire and regional companies contributed services to the project, equivalent in value to over £50,000. Stephen was delighted when Crowders of Horncastle generously donated all of the new planting; N T Killingley of Chesterfield spent many hours laying new paving; and Sutton Power Engineering of Crowle, Scunthorpe funded new benches. In addition, Peter Hart, Mark Glew, Brian Wren and Steven Glew – all professional workmen from the region – contributed to the project, including tree work, turfing, loaning and operating the forklift.

As for the statue, Stephen and David bounced ideas off each either to arrive at a joint design. Several church members joined them, journeying north to witness Harrogate stone specialist, Lapicida, make this into a reality – and another marvellous donation, in addition to all the ground’s new paving.

How exciting to witness fascinating, state-of-the-art laser technology gradually revealing John Wesley standing on top of a globe. The statue creates an effective focal point, encircled with his words ‘The world is my parish’, the story of the garden, in amongst a rainbow sea of flowers and grasses, and a stone slab below, engraved with an 1839 medallion of the brothers Charles and John Wesley.

It is heartwarming to see another two men and a community join together to make a project they believe in come to fruition; to realise what is achievable in a short space of time by pulling in the same direction.

As we were talking, Richard Sutton arrived with his donation: six spanking new benches. He explained to me how he had married in the church, his wife and family had been christened there and regularly went to services, and how nice it was to be able to give something back. Stephen was delighted to see these last pieces of the jigsaw finally come together, barring drifts of alliums and tulips still to plant. Future brides and grooms will surely be pleased with this new setting.

Steve writes: ‘The church’s congregation also deserves a tremendous thank you for being so involved and supporting the project from start to finish. Involved from the very beginning, they have been assisting the project team with planting and weeding, and dozens of hours have been spent creating a new village public space perfect for people of all ages to come and enjoy.

‘John Wesley said, “I look on all the world as my parish” and we hope the community and congregation of The Wesley Memorial Church, Epworth will look on this garden as their own.’

His hope has already become a reality. Members of the congregation have stepped forward to continue the upkeep, so enthused that they keep bringing in more plants. If you are interested in Steve’s design plan, see www.welchdesign.co.uk

The Christian message has always been relayed in stories about seeds, lilies and vines. Growing plants brings hope of new life. Churches and gardens have contemplation in common – both are places that make us pause and think. When the two are side by side, the impact is all the more powerful; witness Wesley Memorial Church surrounded by a vibrant garden, with plants sourced from all over the world adding colour, texture and variety. Most landscape architects must sympathise with Wesley’s phrase.

Townsfolk, intrigued by the uplift, walking past every day, are now enjoying the end result and the accentuated Wesley heritage. Should you visit Epworth, do not pass by. Go in, wander through, sit and admire Stephen’s vision. Sometimes, seeing is believing. You might come across David proudly adding plants, tending the garden and his designer Salmon Pekin chickens. The garden gate, like the church door, is open for everyone.