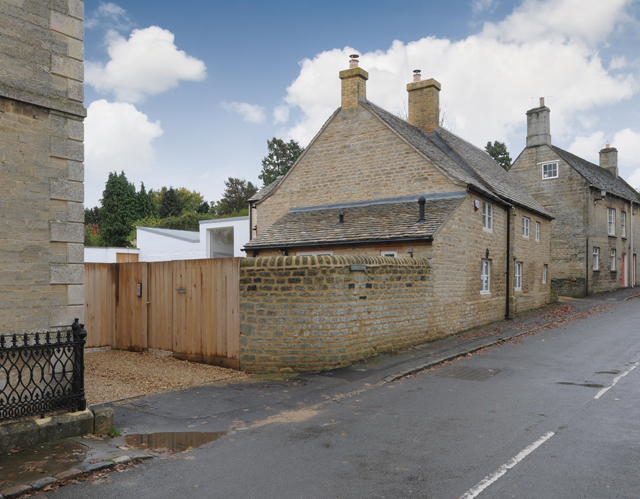 A Grade II listed property, within a conservation area in the village of Barnack, 3 miles south of Stamford, has recently been transformed by the Holton-le-Clay based architect Jonathan Hendry.
Church View is believed to have originally been two cottages and belongs to the McMenemy’s. The couple bought the property in 2012 and although the street facing original property, dating from 1874, is listed, the remainder of the house and the adjoining outbuildings had been extended in an ad hoc way.

Jonathan Hendry was chosen by the couple after extensive research of work by several Lincolnshire based architects and an interview process: “The clients had already said that they liked my portfolio of previous work,” explained Jonathan, “and so that was the starting point to fulfil their brief of renovating the listed cottage as well as demolishing and replacing the existing outbuildings at the rear. Finally they wanted to connect the large garden to the house and renovate the existing stand-alone stable building to create a guest annexe and garden store.

“It is a two-way process between client and architect and faith and trust is required to achieve the result everyone has envisioned. The clients admired the contemporary style of architecture in several of the Living Architecture holiday homes that they had visited, so I planned to tie contemporary replacements for the outbuildings with the period parts of the home.”

The boundary wall was original, so Jonathan’s designs retained the organic form of the roofline which had been created as the three parts of the outbuildings had each been added. A single storey extension adjoining the cottage was demolished and replaced with a two-storey one large enough to create an additional bathroom and new entrance hall. The new middle section contains the new, open plan kitchen with large floor to ceiling windows which overlook the rear courtyard. The third section is a family room, open plan with the kitchen and has large doors which open onto the garden. The courtyard and garden are separated by a wall and gate which links with the guest annexe.

“The most challenging aspect of the design,” said Jonathan, “was attaching something new to the old. I picked up on the mix of materials which had been used on the original outbuildings. I chose Lincolnshire limestone to use for the two-storey extension but then recreated the old vernacular of brick on top of stone for the single storey sections. The brick was then lime washed to tie the exterior together. The existing stables walls were lime washed stone and brick. After several test panels we were able to keep the texture of the buildings similar.”

The original cottage was stripped back and its roof trusses lifted to create extra ceiling height on the first floor. The new accommodation included not only the spacious kitchen, family room, entrance hall and inner courtyard but also three bedrooms, a master en-suite and family bathroom as well as reception rooms in the cottage.

The house has the character of a period interior with different levels and steps into the new sections but has a contemporary minimalism. Douglas fir wood flooring is fitted throughout and whitewashed walls and discreet LED lighting add a calm, light quality to the interior spaces. The bespoke kitchen, designed by Jonathan, and concealed storage creates exceptionally clean lines to complement the angles of the vaulted ceilings.

In all, the design and build of Church View took nearly two-and-a-half years to complete but the McMenemy’s are delighted with the result. “I am proud of how we have understood the client’s lifestyle and interpreted how the house could work for them, as well as the translation of the materials to bring old traditional Lincolnshire and new sections together in their home,” said Jonathan.

Jonathan was born in North East Lincolnshire and worked in London as a newly qualified architect on large scale projects before returning to the county in 2000 to establish his practice Jonathan Hendry Architects. His team of five, based at Holton-le-Clay now work all over the UK. They are currently designing four Paragraph 55 houses for a number of clients, under part of a planning policy framework which covers building ‘exceptional and innovative houses in open countryside’.

Jonathan is the only Lincolnshire based architect to be featured in the prestigious New Architects 3, a book highlighting nearly 100 of the most inspiring architects in the UK which has recently been produced by the Architecture Foundation. In 2011, Jonathan was also awarded the title of Young Architect of the Year.