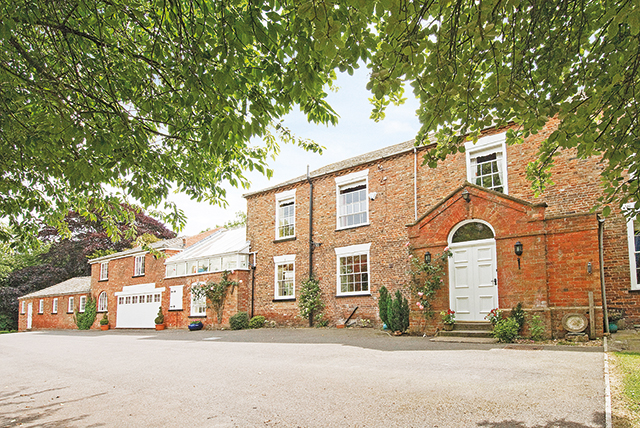 For Richard and Wendy Walsh, leaving Bilsby Hall at Bilsby, near Alford, will be quite a wrench. The couple purchased the old farmhouse ten years ago and the building, set in grounds of nine acres, has made a lovely home for their six children – Andrea (25), Alex (23), Alison (21), Alistair (18), Andrew (15) and Abigail (13) – who are affectionately known as the A-team for obvious reasons.
But now with the older children flying the nest, the substantial seven-bedroomed property is just too big and the couple are casting their eyes elsewhere.

Richard, fifty-seven, who owns local Vauxhall dealership Thurlby Motors in Boston, Alford and Louth, said: “We will be sad to leave the place as it holds many happy memories for us as a family. But we don’t need such a big house anymore and so the time is right to move on.

“We hope the new owners, whoever they will be, will love the house as much as we have done.”

Richard and Wendy moved to Lincolnshire in 1981 from Holmfirth in West Yorkshire. At the time, Richard was working in Derbyshire for a Vauxhall dealership and General Motors in America decided to help aspiring managers buy existing Vauxhall businesses.

He said: “They asked me where I wanted to go and I said Lincolnshire. They then helped me purchase the business and I paid them back within five years.”

In the early days, the couple lived in a property next to the Alford garage, and later bought a house with a walled garden in the centre of the town. But as their family grew and grew, Wendy decided they needed a more substantial home.

For some time, she’d had her eye on a farmhouse at nearby Bilsby which was owned by farmers Mr and Mrs Maplethorpe. When the Maplethorpe’s retired from farming in 2000, they put the house on the market and the Walsh’s jumped at the chance to own it.

Richard added: “I was in America when Wendy phoned to say the house had finally come onto the market. We went to look at it and could immediately see the potential.”

Once the purchase was complete, Richard and Wendy got to work making some alterations to the property to suit their family before they moved in. Originally, there was a farmhouse, a separate coach-house and an outhouse without a roof in between the two. The Walsh’s decided to make the outhouse an integral part of the main property so that it became a dining room leading from the main farmhouse into the coach-house. The coach-house was then converted into a master bedroom suite with large dressing room and bathroom downstairs and a spiral staircase leading to the bedroom upstairs.

Cleverly, a glass walkway from the master bedroom leads back over the dining room into the main house where all the children’s bedrooms are situated.

The farmhouse itself with its characterful original features, including high ceilings, deep skirting boards and original fireplaces, was then completely rewired. One of the bedrooms became an extra bathroom and the kitchen with its useful walk-in pantry was newly refitted.

Richard said: “Wendy is keen on cooking so we had a gas and electric Aga installed in the kitchen and an island unit with sink for food preparation. We also had stone floors from Fired Earth and granite work surfaces.”

Then Wendy, who is a full-time mum, set to work making the house a home. Richard added: “Wendy has decorated the whole house herself. Some rooms are decorated traditionally in keeping with the old building, whilst others are much more modern. We bought an apartment in Harrogate and bought modern furniture for it from a shop in Leeds, and then decided to put some of the furniture in Bilsby Hall instead.”

As the family settled into life in the hall, they added to the grounds of the property too. Richard added: “The grounds were about five acres originally but I said to the owner of the surrounding land that I wanted first refusal on a strip of land all the way round the property if he ever decided to sell up. A year later he said he’d decided to sell and I bought a further four acres.”

Richard then contacted the Lincolnshire Trust for Nature Conservation to ask how the land could best be used to benefit local wildlife. It was agreed that a meadow would be the best option and one was planted. He added: “The meadow is mown every week and forms a nature trail of flowers and butterflies which is beautiful at this time of year.”

Another interesting feature of the property is its privacy – electric gates lead from the road via a quarter-of-a-mile long tree-lined Tarmac driveway to the house and its two garages and tennis courts.

Richard added: “The house is so private and peaceful that we wake up in the morning hearing pheasants. It’s a huge contrast to our Harrogate apartment which is right in the centre of town and noisy all night.

“Bilsby Hall is a children’s paradise because it’s perfectly safe and they can roam free. When the older ones were still young, we’d play cowboys and Indians with them through the trees, or sometimes set up a flag in the grounds to play golf. The girls would often have sleepovers and we’d put tents in the fields, but they’d never last out there all night!”

Now, with the house on the market, another family will get the chance to enjoy the peace and tranquillity Bilsby Hall has to offer. Richard added: “If you want a quiet country house where you can lock yourself away and be at peace with the world, then Bilsby Hall is an ideal place to be.”