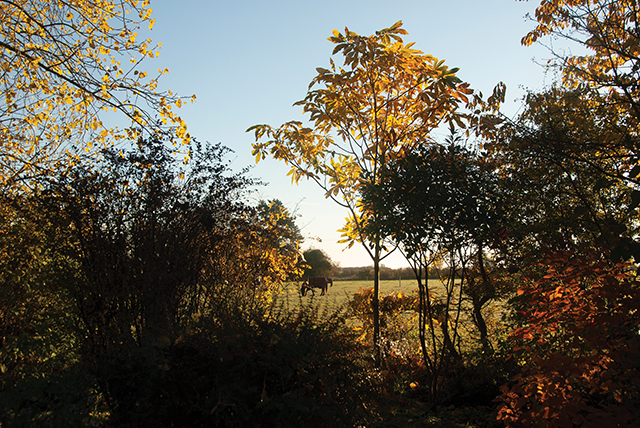 HM The Queen has planted over 1,500 trees worldwide! By my reckoning, that amounts to a right-royal average, 20-a-year since her accession to the throne. Take into consideration the millions of saplings planted to mark her Diamond Jubilee. Remember how in 2012 she planted a large-leaved lime tree, Tilia platyphyllos, near to Burghley’s grand lime tree dating from when her predecessor Elizabeth I was on the throne. Elizabeth II has personally contributed to both regeneration and the health of the planet.

Appropriate then, that the current sincere initiative, ‘The Queen’s Green Canopy’ (QGC), invites us all to celebrate Her Majesty’s unprecedented Platinum Jubilee. Communities, schools, businesses, charities and groups in villages, towns and cities across the kingdom are being encouraged to ‘get out there’ planting trees from now until March 2022 and again, in the next tree-planting season, from October 2022 till the end of the Jubilee year.

In March, Prince Charles, patron of the QGC, joined his mother in planting the first Jubilee tree, a ‘Verdun Oak’ at Windsor, grown from an acorn from one of the many original oaks planted with acorns from WWI’s Verdun battlefield. Recently, on 1st October, to mark the Jubilee project opening with another act of hope and faith in the future, together they planted a copper beech, Fagus sylvatica purpurea, at the Balmoral estate. Both trees now feature on a digital QGC map online (https://queensgreencanopy.org/).

Young and old, everyone who plants a celebratory tree is asked to chart a nationwide map of ‘Platinum’ planting, by adding its location and, if possible, by uploading a photograph to this QGC website. As the next weeks fly by, encourage your children and grandchildren to check this detailed, easy to enlarge map regularly, till completely covered in flags. I write on 2nd October and already several images of oak, apple, alder and various broad-leaved trees have appeared on the map. Come on Lincolnshire, not one tree in our area yet! Hopefully by the time this November issue hits the press, there will be more than a sprinkling… Let’s aim for at least 70 sites before the 2022 Jubilee Year arrives.

Remember how the year 2000 spurred many people to mark the occasion? We bought several deciduous trees from the Lincolnshire Gardens Trust Millennium Plant Fair at Scrivelsby Court. Only two flourished, one an upright 8-foot oak sapling donated from the Grimsthorpe estate, the other a more ornamental 10-foot broadleaved Indian Horse Chestnut, Aesculus indica, both in reasonably open, sunny spots and fertile soil on the edge of our old orchard garden. Frankly, with little effort, other than initial watering during dry patches in their first year, and occasional lifting of the canopy by removing or ‘shredding’ lower branches, the growth and autumnal gold foliage has amazed us.

After 20 years, our Millennium oak produced a healthy crop of nutrient-rich acorns. Last winter, I brought inside any tender potted plants, little knowing that a passing foraging squirrel had been busy. As New Year approached, I was amused to spy a trinity of fresh green oak leaves sprouting in amongst the cerise-pink geranium. Our free Grimsthorpe progeny is now planted in the garden.

More good news: The Woodland Trust, the national charity based here in Lincolnshire, is spearheading the QGC project by donating free packs of trees for schools and communities, with 3 million saplings distributed on a first come first serve basis. Other partner organisations will be similarly giving out free trees. In addition, a UK-wide network of 70 Ancient Woodlands will be dedicated, and 70 Ancient Trees identified, to celebrate Her Majesty’s 70 years of service.

In this county’s few remaining ancient woodlands, Legbourne Wood, south of Louth, and Bourne Woods might feature. Explore your neighbourhood to spot an ancient tree not yet recorded. These generally have wider trunks, a sunken crown and often hollowing. As just one local example, The Woodland Trust database features an ancient Scots pine in Sleaford Cemetery. I intend to measure, at shoulder height, the thick trunk of a veteran bird-cherry in our garden.

An old black mulberry leans on the hillside below Lincoln Cathedral. Grantham House and several county estates, such as Scawby and Hackthorn, feature this tree. They recall a legendary royal mistake. Between 1609 and 1610, James I planted 10,000 mulberry trees beside St James’s Church, Piccadilly to kickstart an English silk industry. Unfortunately, these were black mulberries, Morus nigra, when only the white mulberry is the silkworms’ preferred species.

King Arthur’s round table was likely fashioned from oak. Famously, the future Charles II hid from the roundheads in an ancient oak in Worcestershire which was hacked at by souvenir-hunters, and is no longer extant. Champion ‘Elizabeth oaks’, dating from the period of the last Tudor monarch, survive in one or two spots in the country. I am willing to bet that the iconic and useful oak will be the predominant tree planted in the QGC project, a symbol of strength, honour, endurance and liberty. Imagine also those hundreds of thousands of new ‘conversations’ initiated underground. So many insects and organisms thrive in the dappled shade of over-arching canopies. Oaks stimulate and nourish a network of wildlife, flora and fauna which rely on oak pasture or woodland.

Trees are tools for place-making. As singletons, or in groves, they are guardians of our views. Planted in large clumps or battalions, they bring form and colour to hills and valleys. Wondering what to plant depends on location – a crab-apple for spring blossom, a Liquidambar for autumn colour or a noble evergreen conifer?

Research online for ideas and images. Experts recommend planting in a square hole to encourage a healthy root system. Make sure to secure larger types of trees from buffeting winds with a robust stake. Allow plenty of room for them to grow and spread out their branches. Imagine each tree fully grown. Check the tree’s height and habit in maturity. Be extra careful that, in the future, your chosen Jubilee tree will not take light away from your next-door neighbours.

Every garden in every new-build house should have at least one tree for height, year-round structure, and seasonal beauty. If your garden is too overcrowded to add a new tree, talk to your parish council, local school, hospice or hospital about your neighbourhood green space and play areas, and where, and what variety, might be fitting to donate to improve the setting. No time to sit back on oak-leaf laurels, visit your local nursery or garden centre before forecourts run out of stock.

Forgive the pun, much more than ‘quintessentially good for communities’, the QGC will prove a ‘tree-mendous’ environmental legacy for our children and future generations. By pulling together to mark Her Majesty’s Platinum Jubilee in this way, waves of planting will honour her extraordinary dedication to her country. Let’s hope, with this joyous investment in the well-being of our natural world: woods, parks and gardens, wildlife, the realisation will also dawn in many more minds, just how ‘trees mend us’.