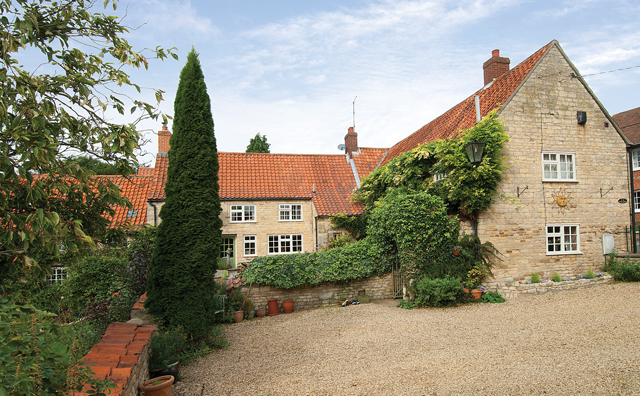 Two for the price of one

When Philip and Mags Turrell bought Beck House and the adjoining Kings Cottage in Fulbeck in 1987, they felt it was meant to be.
The couple were living in the West London borough of Harrow at the time and the food company Philip was working for in Smithfield had asked him to take over the running of their latest acquisition – a factory in Spalding.

Philip, who is originally from Grimsby, was commuting between Harrow and Spalding when a trip to a local estate agents revealed that their money could stretch much further in Lincolnshire.

He said: “We came up to Lincolnshire to meet some friends for the weekend and one of them asked if we had seen the Daily Express. It showed a picture of Beck House and read: ‘This house would be worth £450,000 in Harrow.’ Coming from Harrow, we had to take a look at it.

“We visited on the Saturday morning and immediately fell in love with Beck House and Fulbeck which is a beautiful village. So we returned the next day and told the owner that we would offer him the asking price if he took the sign down and he accepted! It was like Beck House was waiting for us.”

Once the sale had gone through, the Turrells became the custodians of two properties with a fascinating history.

It is believed that in the seventeenth century, before the Enclosures Act, the building was a farmhouse and barns. Then, in Victorian times, the building became the village workhouse.

Later the property deeds show that the workhouse was converted into four large agricultural cottages called Workhouse Place. Each cottage had a large allotment garden which contained its own washhouse, pigsty and outside soil toilet which would have been emptied once a week.

In 1981, the previous owner had renovated three of the cottages into one four-bedroom house known as Beck House. When the Turrells bought the properties, Kings Cottage was simply known as number thirty-eight and had tenants, Bill King and his wife Edna, whose family had been unbroken tenants of the cottage for 200 years.

Philip said: “We hadn’t met Bill and Edna before we bought the houses but we saw their garden was immaculate and could tell they would be lovely people.”

He added: “Bill’s family had always lived in Fulbeck and were a wonderful old Lincolnshire family who were renowned for gardening. When we moved into Beck House, a third of our garden was Bill’s allotment and they were virtually self-sufficient.

“Sadly Bill died in his eighties after suffering a stroke and his wife predeceased him. Their two sons, who went to the village school, then the grammar school and off into the world, did not continue the tenancy.”

After Bill and Edna left the cottage, Philip used the building as offices for his business for ten years (he was the managing director of a food manufacturing company and now does consultancy and agency work for the food industry) before deciding to sympathetically renovate the building for safety’s sake and find new tenants.

Philip said: “We named Kings Cottage in Bill and Edna’s memory and kept it in the original condition it was in when they lived there. It is almost a museum piece in itself and could easily rival Mrs Smith’s Cottage in Navenby.”

He explained: “Bill and Edna had no cooker but had a fire in the kitchen instead and cooked on that with an oven and tap at the back of it. There was no heating in the house other than the fire in the kitchen and the ceiling in the kitchen is made of old ship’s timbers. Pitch pine over the top of regular beams with ashlar (lime and ash) on top forms the floor of the bedroom above which is very rare.”

The renovation programme included upgrading the electrics and rewiring, installing a log burner and new chimney in the lounge and improving the plumbing to the property.

Philip added: “We didn’t want to damage any of the original structure of the property by installing central heating so we used storage heaters instead.”

Although Kings Cottage needed some renovation work to bring it up to today’s standards, Beck House had already benefited from the renovation programme carried out by its previous owner.

Philip said: “When we bought Beck House, the owner had just finished renovating it and had done a fantastic job, gutting the three former cottages and rebuilding them into one property from the inside.

“During the work, he had uncovered lots of original features and added others, like the stone mullion windows and little statuettes in the walls. It was very much in keeping with the house’s personality.”

The house is full of interesting period features, with a medieval stone mullion window in the front entrance and vestibule, a window seat and heavily beamed ceiling in the dining room and an Inglenook-style stone fireplace and exposed stonework with a Salt Niche in the sitting room. Upstairs, there are four bedrooms and a family bathroom; the master bedroom has an en suite and dual aspect with far-reaching views over the Lincolnshire countryside.

The property sits in over half an acre of south facing gardens which are fully enclosed by limestone and pantile capped walls and feature fruit trees, mature specimen trees, cottage flowers, terraces and patio areas with The Beck running across 300 feet at the bottom of the gardens. There is also a gravelled courtyard with parking for six cars and a triple garage.

Now, after twenty-four years in Beck Cottage, the Turrells have decided the time is right to move on and have placed the property on the market.

Philip said: “We’ve been amazingly happy here but we’ve decided to downsize because the property is too big for just the two of us now.

“We would dearly love a family to buy the house and enjoy the place as a family, as we have done.”