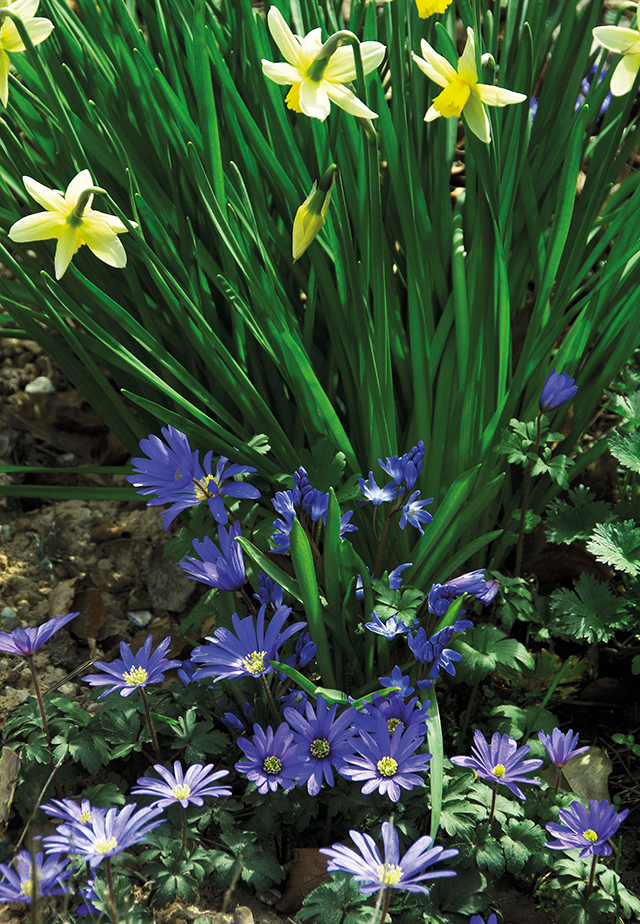 If you were asked to name some unforgettable experience, I wonder whether any garden, tree or flower would feature? I asked my husband, Mike, to name a garden he considered memorable. He took no time to answer: “Our front garden when I was a child. An elm tree by the high stone wall provided a leaning branch where we fixed a rope swing.” I suspect for many nature lovers the answer might be a garden with acres of bluebells or perhaps one with herbaceous borders ruled by towering, heavenly delphiniums.

Talking of divine blue, both aquamarine and pale blue are the birthstone colours for March. Whereas green, as you would expect, heralds the beginning shoots of spring, I find blue flowers stir some vivid, treasured memories. Spying tiny, spreading speedwell stars – one of the year’s first real blue in the wild – immediately transports me back to my childhood garden enclosing our 1930s block of flats. How I loved playing outdoors on the great lawn and exploring the surrounding rambling rhododendrons and woodland, where, yes, come May there were plenty of bluebells!

The word ‘unforgettable’ never fails to conjure up the 1950s song made famous by American vocalist and jazz pianist Nat King Cole. I remember my elder sister, Sue, playing his compilation LP record endlessly in her bedroom. Such a gorgeous, romantic voice, I never minded her ‘Blues’ period! The first time I saw blue flowers en masse, Sue and I were on our way to visit the celebrated Keukenhof Gardens in the Netherlands. The colour-rich tulip fields were sensational of course, but, as rectangle upon rectangle of hyacinths, a living Dutch tapestry in pink, white and blue, flashed by, what I remember most is their unique strong fragrance permeating the air.

More recently, I have planted numbers of hyacinths, inspired by an unforgettable walk in the charming 18th century pleasure ground at Norton Place, north of Lincoln. A few white under the silver birches, the rest mainly blue, in small groups along the path on the eastern edge of the orchard. Hyacinth ‘Delft Blue’ is a must, though Hyacinth ‘Kronos’ takes some beating. The name comes from Greek mythology, after the Titan God of Time, son of Uranus (sky) and Gaea (earth), who ruled the world until his son Zeus dethroned him. True, its richer, deep blue, bell-shaped blooms fade all too quickly in April sunshine.

Have you had much luck with squills, a common low-growing spring bulb with narrow strap-shaped leaves? Once treated as a member of the hyacinth family, scilla have only recently been classified as belonging to the asparagus family. The flowering period seems all too fleeting though showing off some of the best blues. Their short racemes bearing bowl-shaped bright blue flowers on purplish stems, Scilla siberica, partnering fritillaries or leaves of ‘Lords and Ladies’ with distinctive pale veins, Arum italicum, to good effect. Scilla mischtschenkoana are also striking, silvery-blue.

The windflower, Anemone blanda, is worth planting in droves! These charming lavender-blue, yellow-centred, daisy-like flowers nestle happily at the feet of daffodils and budding creamy yellow or lime-green shrubs, such as Cornus. The first time I really took note of this attractive anemone was on a memorable visit to the Backs at Cambridge. Every spring thousands of nodding heads (appropriate to the University colour) appear in waves, a rippling sea of blue under white cherry blossom along the walks, almost as if the flooding River Cam has overflowed! Each autumn I keep planting more anemone rhizomes hoping to create the same effect one day.

You might have heard that 2020 highlights Octavia Hill’s exceptional founding of the National Trust, marking 125 years of conservation care, nurturing nature and many of our unforgettable historical houses and landscapes for the nation. Older still, and cause for local celebration, the unforgettable Italian Garden at Belton, first developed in 1820, has been undergoing restoration. The Orangery is to be painted the original colour green as designed by Jeffry Wyatville. Well worth another visit!

Meanwhile, Burghley House staff are trumpeting the 500th anniversary of the founder, William Cecil (1520-1598) by running a competition encouraging children to write a 500-word “beastly boring” story. Seems a strange if, hopefully, engaging way to celebrate! (See www.burghley.co.uk/events/beastly-boring-burghley). Might eagle-eyed girls and boys be inspired by the Cecil family crest to imagine lions roaming the park or leaping out of the ‘Garden of Surprises’? This heraldry, where a pair of rampant golden lions hold up a sheaf of corn, is seen on the fine early 18th century wrought ironwork gates on the North Court, but also on the extraordinary Golden Gate, likewise crafted by the skilled French designer Jean Tijou to reflect the setting sun on the west side of the house.

Noblemen used the powerful symbolism of this king of beasts, keeping the story of their ancestors interwoven with the setting of their home, and ensuring an enduring sense of place. A book lover and antiquarian, fascinated by the study of coats of arms and genealogy, Cecil was born in Bourne, the son of Sir Richard Cecil, owner of the Burghley estate, attending first The King’s School, Grantham, and then Stamford School.

He rose to be Queen Elizabeth I’s Lord High Treasurer, created 1st Baron Burghley, her most influential minister, and as she confessed, ‘her Spirit’. He, in return, chose the original layout of the house in the shape of a capital E in honour of his queen, and bestowed all the best arts of architecture and horticulture on Burghley.

I was surprised to discover that Cecil’s coat of arms, bearing the single-minded motto ‘Cor Unum Via Una’, ‘One heart, one way’, also appears in the first scientific botanical book published in England, probably by way of patronage. Herball, or Generall Historie of Plantes (1597) was penned by John Gerard (1545–1612) with 1,484-pages listing and illustrating herbs and other plants, and their folklore. It remained a standard gardening reference for many decades.

Gerard was a London botanist and herb collector, who, in 1577, had been promoted as superintendent of the gardens at Cecil’s London house, and in addition those at his employer’s Hertfordshire home, Theobalds, and at Burghley House. He worked there for more than twenty years. Long before 18th century royal gardeners London and Wise added their lime venues or ‘Capability’ Brown his reflective ‘pretend river’, Gerard was the man responsible, way back then, for making Burghley famous as a beautiful and luxurious estate. Stamford townsfolk have always been free to walk and enjoy the park. High on my list of exceptional gardens, Burghley House hosts a memorable champion lime tree as gate guardian, an oak and a lime planted by Queen Victoria and Prince Albert, and some remarkable veteran chestnut trees in the High Park.

Which is your favourite ‘unforgettable’ Lincolnshire garden? Perhaps you might also like to try your hand at this year’s Lincolnshire’s Gardens Trust Photography Competition ‘Unforgettable Gardens of Lincolnshire’.

Whether you are an amateur or a professional photographer, have fun capturing those tremendous gardens. There are sure to be some sensational, ‘unforgettable’ 2020 images for the taking! Winners will see their photos published in this magazine! I look forward to hearing from you.