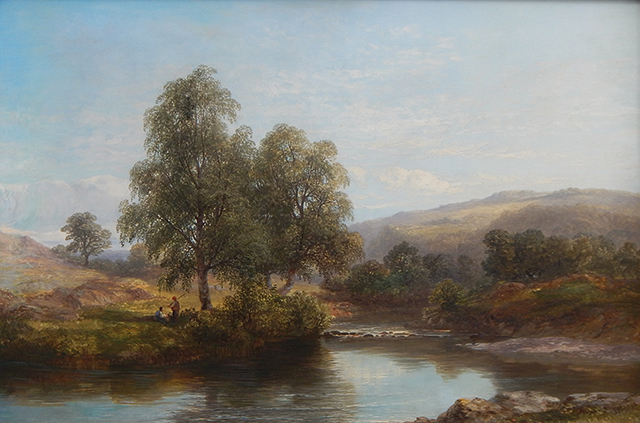 Victorian art covers the period of the nineteenth century, through the reign of Queen Victoria (1837–1901). This period saw an explosion of pictures influenced by a variety of art movements and fashion. The industrial growth and power of the nation saw an expansion of the middle classes, eager to spend their newfound wealth. This expansion has left a legacy of art that regularly appears in today’s auction market. Keen eyed auction buyers can find gems within the genre of picturesque landscapes and historically influenced scenes.

Within the last Lincoln Fine Art auction, several paintings from the Victorian period sold at double and treble the pre-sale auction estimate. An oil painting by the French painter Charles Louis Lucien Muller (1815-1892) titled ‘The Lovers’ sold for £4,600. Depicting a couple satnding in a dreamlike pose within an idyllic country landscape, it showed all the qualities of the period for telling a story of emotion and passion.

The landscape scene is typical of the Victorian period and an oil painting by Henry Hillier Parker (1858-1930) of Streatley in Berkshire shows the hand cutting of hay on a summer’s day. This picture sold for just over top estimate at £1,600 and a river landscape with figures on the bank by James Poole (1803-1886) again topped the estimate, selling at £800.

Finally in the tradition of Victorian portraiture, an oil painting of Frederick William Elwell by his soon to be wife Mary Dawson Holmes (1874-1952) tripled the bottom estimate, selling for £2,800.

The demand for Victorian and Victorian influenced art continues well into the twenty-first century.