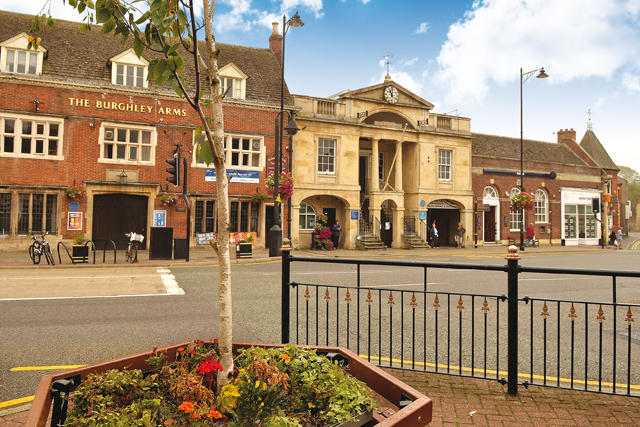 ‘Be careful what you wish for’ is an oft used phrase. We had hoped for good weather but would never have imagined it could be too good.
We had been planning the visit by the Duke for well over two months and needless to say our biggest fear was we would have a wet and windy day. However, the week turned out to be one of the hottest on record. As the organiser, one therefore goes from planning for rain to managing heat inside a large marquee. Fortunately we were able to get some air-con units at the last minute which kept the temperature just bearable for the Duke’s arrival and the subsequent afternoon tea.

The Vice Lord-Lieutenant, Graham Rowles Nicholson, greeted the Duke on his arrival at 2.30pm at Hemswell and introduced him to the civil dignitaries and the Woldgrain Board.

Obviously well briefed, but also as a seasoned and consummate professional the Duke was immediately at ease and chatted with those in the lineup, just as though he was meeting old friends again.

After he had spent quite a bit of time talking to the Defra/RPA representatives, the contractors and the architect Ken Allen, the Duke was invited to watch a presentation by John Burnett, the managing director of Woldgrain.

The Powerpoint presentation took the Duke through the history of Woldgrain from its inception in 1976 and detailed the events which led to grants being won in 2009 and 2013, and the subsequent five or six years of expansion of the plant; taking it from 20,000 tonnes to nearly 90,000 tonnes of storage. Highlighting the importance of the improvements in the plant infrastructure, John Burnett said the facility was now fit for the twenty-first century and room for further expansion had been considered in the design. The presentation featured a video of the plant which had been shot from a drone only ten days earlier.

Following the presentation the Duke was invited to take a tour of the plant facilities. Starting with the laboratory, he met Dan Murphy and Amanda Brook, who gave a demonstration of logging a grain lorry into the computer system, followed by the process of sampling a lorry and how quickly and accurately modern grain testing machines work.

Next stop on the tour was the plant control room where he met Gary Jones and Paul Steer. The Duke watched a demonstration of a lorry being filled with grain and another lorry tipping grain at the same time. The last leg of the tour took the Duke into one of the large silos. Clapping his hands he listened for the echo and pronounced, “not quite St Paul’s, but impressive nonetheless.”

Finally the Duke was escorted back to the marquee where he chatted with many of the guests and Woldgrain members. Fred Myers invited The Duke to officially unveil a plaque and declare the new plant open.

The Duke then presented a long service award to Michael Anyan who has been a member, director and until this year company secretary since 1980. This was a very proud moment for Michael, his wife Clare, daughter Victoria and son Charles.

Having taken some light refreshments, Fred presented the Duke with a gift to remember his visit by and was escorted to his car, where the civil dignitaries were assembled to say farewell.

The guests stayed to take afternoon tea which was immaculately served and presented by the staff of The Hemswell Court Hotel.