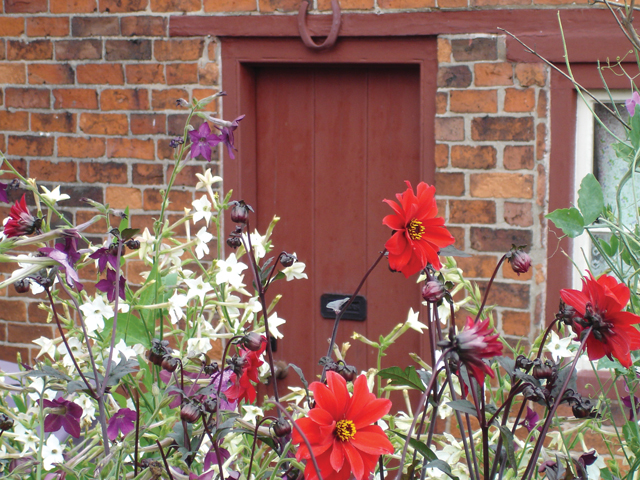 Steffie Shields meets two enthusiasts ‘reconstructing’ a unique 1950s garden.
Peter and Paul are names that belong together. I am not considering the original saintly variety (although as I write, on 29th June, it happens to be their feast day!).

Recently I met two thoughtful friends – yes, Peter and Paul – brought together by chance and an extraordinary garden. I was reminded of two stone lions sitting to attention either side of my parents’ old farmhouse door that we christened ‘Peter and Paul’. Like Janet and John, the names suggest a familiar kind of caring strength; a rock of ages, lionhearted force for good.

The garden in question is part of Mrs Smith’s Cottage Museum in Navenby, preserved by North Kestevan District Council (NKDC) and local residents. Mrs Smith was born locally as Hilda Craven in 1892. This staunch Methodist led a frugal life, the last seventy-three years in an early nineteenth-century red brick Lincolnshire house that she named ‘Craven Cottage’ with few ‘mod cons’ other than electricity. A bright bookkeeper and keen self-taught gardener, she tended her small, rectangular garden enclosed by an iron-hooked fence, now hidden in amongst a mixed privet hedge, edged with marigolds.

At her most active in the 1950s and ’60s she grew all her own vegetables in an allotment about 100 yards further along East Road, until the land was taken for new housing development. In 1956 Hilda married Joseph Smith, a lay Methodist preacher, who then moved into the cottage, but he died only four years later. The garden must have provided solace for lost companionship. When she too passed away in 1995, aged 102, local residents realised that the story of this remarkable villager was special and that this snapshot of rural life little-changed from Edwardian times through to the late-twentieth century, was well worth preserving.

The museum opened in 1999 and thrives owing to volunteers from the community. Enter Paul Smith, historian of science, local to Navenby (though no relation). He decided to serve as a volunteer guide and, after taking an NVQ in heritage studies, soon turned his attention and his energy to the garden. With an MSc in horticultural science, having first achieved his PhD in the history of horticultural science, this was a clear case of a round peg for a round hole. He offered to help maintain the garden in the style and manner to which Mrs Smith had been accustomed, with annuals and some perennials, such as bulbs and roses. Since 2008, he has been in charge and is “smitten” with the garden.

To his trained eye many of the plants were out of place, the box edging to flowerbeds for instance, and it was a well-kept low maintenance perennial flower garden. So he persuaded owners NKDC, the curator and the Friends Committee, to agree to allow changes and they kindly provided funds for the reconstruction work to begin.

Then in 2010, on a Heritage Open Day, Peter Weston, a retired biological scientist with an MSc in zoology living in Lincoln, came with his wife to visit the Museum. “The garden looked so vibrant,” he remembered, and enquired who looked after it. A volunteer guide indicated Paul. Something made Peter ask ‘Would you like a hand?’

Paul explained his plans. Having designed a heritage orchard at Boston Manor, near London, he expressed his concern that the garden was not really heritage, and his desire to extend the project by showing how Mrs Smith gardened through all the seasons. Peter immediately used his scientific background and his design skills to embellish the gradually evolving setting; so right and so key to the cottage’s sense of place. Visitors will now understand and appreciate where, why and how Mrs Smith spent most of her waking hours.

We sat talking and contemplating the plot. Both men clearly get on famously, sharing ideas and learning from each other’s strengths. Peter, a great photographer, has been recording the garden’s highlights. He showed me bare soil ‘before’ shots, and ‘after’ shots; a painter’s rainbow palette of colour, threaded with a variety of reds complementing the red brick cottage backdrop. Hot on “science”, he studies the wildlife that inhabits the garden, including a partridge with ten chicks nesting by the holly tree and (new to me!) a rosy pink woodlouse, Androniscus dentiger.

An old apple tree ‘Grenadier Codling’, first recorded in the seventeenth century, overhangs the corner near the gate; it bears an uncommon cooking apple which makes delicious apple desserts. They are being propagated to sell to visitors.

The garden, facing south and a veritable suntrap for flowers, now has the right atmosphere true to the rich variety seen in Mrs Smith’s day. She never called it a ‘Cottage Garden’, rather a ‘Flower Garden’, and used to boast to friends and villagers that there was something in flower every day of the year. Paul and Peter therefore are aiming at ‘reconstruction’ choosing the 1950s period.

Paul believes: “It’s important to get the history right in order to dovetail the garden into the cottage. Trouble is, you cannot conserve annuals along museum guidelines.”

This ‘time Tardis’ should stimulate the memories of the ‘baby boomer’ generation! Paul and Peter continue to research all the annuals and perennials that Mrs Smith used to buy from local nurserymen or Pennell’s garden shop formerly in Lincoln High Street, and also exchange with neighbours. Her concise comments in her diaries are a rich resource for them.

The Cottage museum with its Visitors’ Centre displays artefacts and information about the life and times of Mrs Smith in a rural village. Unfortunately, due to problems with the roof structure, the museum is closed temporarily. Thankfully, the small garden can still be seen by every passer-by, just as it was in Hilda’s day when she would happily chat to everyone over the garden hedge. Meanwhile Peter and Paul give talks, pooling their expertise to pass on growing techniques and enthuse adults and schoolchildren alike.

Together, Peter and Paul toil to bring Mrs Smith’s ‘small humble’ garden back to life. They spend much of their spare time digging over, sowing, growing on, and planting out in this special corner of Navenby. I like to think Mrs Smith’s reaction, or that of anyone who glances over the garden gate, would be the same as mine, amazed and uplifted.