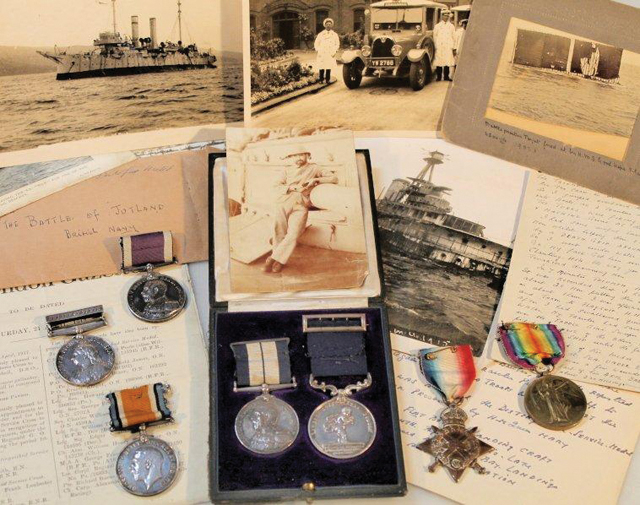 Much of the attraction of owning a piece of militaria (the name given to military memorabilia) is discovering the story behind each item. Medals, in particular, offer the buyer a chance to dip into the past in an area of history which is usually well documented.
This was certainly the case when a group of Victoria and World War One British Naval medals awarded to Petty Officer Arthur Henry Craven came up for auction at the Grantham saleroom of Golding Young & Mawer recently.

The lot included a Distinguished Service Medal; a Victoria China War Medal (1900) with Pekin clasp; a George V Distinguished Service Medal; a George V Royal Naval Long Service and Good Conduct Medal; and a Royal Humane Society Silver Medal for life saving (successful), 1914-15 Star, 1914-18 War Medal and 1914-18 Victory Medal, along with a collection of photographs, handwritten memoirs and notes relating the actions of Petty Officer Craven and his involvement with the Dardanelles Operation at Gallipoli in May 1915.

During the First World War, Petty Officer Craven was serving aboard the trawler 703 Lord Wimborne which was on minesweeping and general duties including landing Australian troops on the beaches at Gallipoli.

On 25th April 1915, having offloaded wounded Australian soldiers to the battleship HMS Triumph and then returning to the beach with ammunition, the Lord Wimborne was in close attendance as HMS Triumph sustained German torpedo damage and, according to Craven’s handwritten account, went down in seven minutes.

During the attempted rescue of some 700 men, Arthur Craven jumped into the water from a lifeboat and rescued about twenty men during a half-hour period; one or two of whom Craven recounts having ‘awful tussles’ with. Approximately 600 men lost their lives that day.

For his actions, Petty Officer Craven was awarded the Humane Society Silver Medal for life-saving and the Distinguished Service Medal. Both medals were presented to him by Queen Mary.

The medals and associated ephemera were passed down through Mr Craven’s family until they were featured in the auction where they made £4,400 against a £2,500 to £3,500 estimate.

Whoever bought the lot on the day of the auction will not only have made an excellent investment, but will own an item relating to a fascinating piece of military history.