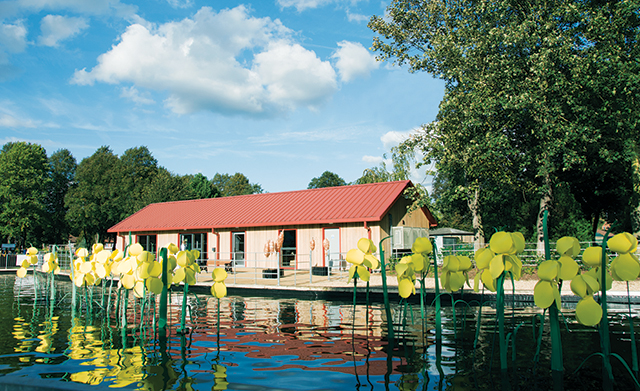 Steffie Shields applauds a fitting restoration of Wyndham WWI Memorial Park in Grantham.
The annual tradition of remembrance seems extra poignant. At the centenary of the end of WWI, we will pause again to recall the horrific numbers of young men (my great-uncle, Roy Hadingham, amongst them) who lost their lives.

In Spalding, the town’s WWI Memorial in Ayscoughfee Park, designed by the much-admired architect Sir Edwin Lutyens (March 1869–1944) is one of the finest war memorials in the country, effectively reflected in the long canal. Water, a life-enhancing source and life-giving space, is also perfect for reflection. A memorial stone, in front of his elegant classical portico, as if a rock on which peace was founded, bears the names of the fallen beside the words ‘Their Name Liveth For Evermore’.

Moves are being made to create another memorial nearby, to name those local heroes who gave their lives for their country in WWII. In Grantham, back in 1920, rather than a monument, the Town Council decided that the centuries old local, town meeting-place situated alongside the waters of the River Witham, Slate Mill Park should be renamed. This had been prompted by a £1,000 gift donated by the Dowager Lady Leconfield towards a memorial to perpetuate the memory of her son, Captain the Hon. William Reginald Wyndham, 1st Life Guards (1876–1914) killed in action, November 1914.

Although born at Petworth, one of Capability Brown’s best surviving, peaceful park landscapes in Sussex, Wyndham’s links with Grantham were strong. His father, Henry Wyndham, 2nd Baron Leconfield (1830–6th January 1901), bore the same name as a family war hero, and served in the Life Guards. William, and two of his brothers, were destined to follow suit. It is said that the victory at Waterloo hinged on Captain Henry Wyndham, serving under the Duke of Wellington, in closing the gates to Hougoumont farm to entrap many French soldiers who were then slain. He was severely injured in the Battle, but later rose to the rank of General. His grandfather, the 3rd Earl of Egremont commissioned George Jones RA to commemorate his part in the Battles of Vitoria and Waterloo, in two great paintings that still hang in the Beauty Room of Petworth House.

William Wyndham served in the South African (Boer) War receiving the Queen’s medal with three clasps. Proud thoughts of his ancestor’s heroism, and military career, must have been both spur and role model. After a riding accident in 1903 led to his retirement, he farmed in East Africa, before moving to the Rocky Mountains in North America. A keen huntsman, Wyndham later returned to England, where, during the winter months, he lived on Town Parade, Grantham, and rode out with several local hunts. He donated a collection of big game trophies to the Town Council, and, like his great grandfather, the 3rd Earl, became a winning racehorse owner. At the onset of WWI, Wyndham re-joined the Army as a Captain in the Lincolnshire Yeomanry, later attached to 1st Life Guards arriving 8th October 1914 in France. After less than a month, he was killed in Belgium during desperate fighting at the 1st Battle of Ypres (today Ieper). Wyndham lies buried in Zillebeke Churchyard, 3km east of the town centre.

Hence, in 1922, 400 unemployed men, returning soldiers among them, were paid by the Board of Guardians the standard unemployment rate of 1 shilling (5p) an hour to develop Grantham’s town park into Wyndham WWI Memorial Park. The scheme cost about £5,000. In July 1924, several thousand spectators turned out to watch the parade when Lady Leconfield officially opened the park.

Over time, every generation has appreciated the park and added to its facilities, such as Bowling Green, Cafe and tennis courts. One of the best recent moves was the establishment of Wyndham Park Forum in 2005. Enlightened councillors, South Kesteven Council staff, and especially Steve Frisby, grounds maintenance coordinator, were determined to engage the local community in the care of the park and to help organise events. Over the last decade, the Forum’s partnership with the Council secured funding and created a new Sensory Garden (2010) designed by Tim Kemp, and since 2012, £910,600 Heritage Lottery Funding (HLF) for a major restoration project.

In 2014 Lincolnshire Gardens Trust (LGT) marked the centenary of the outbreak of WWI with a simple but moving organised walk in Grantham. We started from the park entrance where a weathervane reminds passersby that WWI soldiers once marched through the old park in their many thousands on the way from Grantham Station to train with the Machine Gun Corps in Belton Park. We followed in their footsteps down Belton Lane to the Machine Gun Corps Memorial Plaque by the gates of Belton Park, before retracing our steps.

In September 2018 I joined LGT members once again the Memorial Park. We were all impressed with an exhibition in the smart new Visitor’s Centre displaying in-depth historical research, archive photographs, personal recollections and newspaper clippings revealing the story and a perfect model of a town park. The original ‘bones’ of the 1922 design are still recognisable: Lime Avenue and riverside walk, White Bridge, lawns dotted with rainbow flowerbeds, ‘bandstand’ pavilion, newly painted in its original cream and green, spaces for children’s play and playing fields for sport.

The entrance lodge, built for George V’s Silver Jubilee, and the ‘old ticket office’ to the swimming lido have also been refurbished.

Restoration Project Officer Steve Frisby acknowledged with a broad smile: “The community pulling and working together, both public and private sectors, achieves a whole lot more!”

Little wonder, over the last six years the park has been awarded seven prestigious Green Flags – the benchmark quality standard for parks or green spaces. Volunteers, John Knowles, Wyndham Park Forum chairman, and Elizabeth Bowskill, Forum secretary, deserve every accolade for their tireless teamwork, working together with Steve, with patient fortitude and ‘dawn of a new era’ vision for a memorial park fit for today’s twenty-first-century residents.

As part of a national chain, and a ‘Battle’s Over’ commemoration countrywide, beacons will blaze around the country, and bells in 1,000 churches and cathedrals will ring out in celebration. It is especially fitting that a beacon will be lit in Wyndham War Memorial Park in Grantham on the evening of 11th November 2018, to mark the 100th anniversary of the end of World War 1. The beacon’s light symbolises hope for a bright and peaceful future for the vibrant restored park, and opportunities for enjoyment for all families and ages beside the quiet, ever-flowing waters of the Witham. Our public parks matter after war and help in maintaining peace.