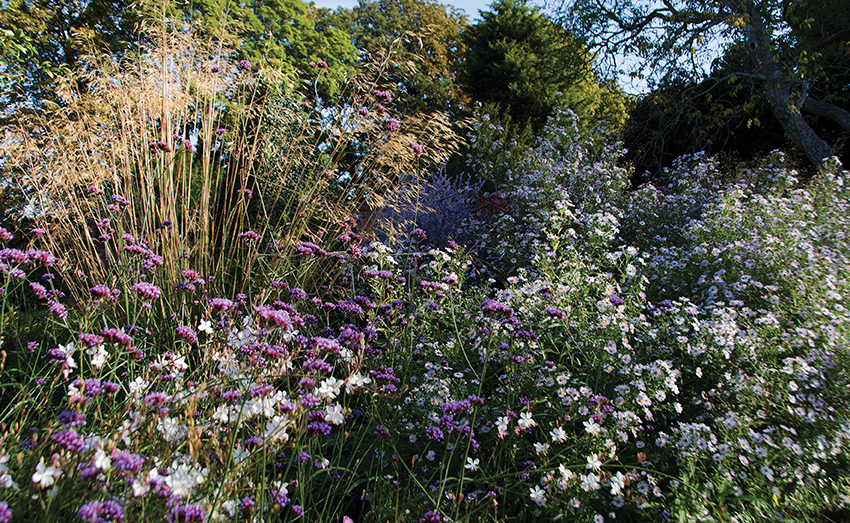 Where garden plans come together

Steffie Shields visits Mere House, a 19th-century farmstead with a superb 21st-century garden.
Jenny and Gordon Gray bought the farmstead, approached by a tree-lined drive, in 1975. The small ha-ha to the east overlooked a grass tennis court, taking up the original ‘lawn’ at the front of the house, bounded with flower beds and yew bushes, and an old orchard to the south.

Last September, Alice Gray’s invitation to visit and photograph the garden brought back memories. I had first heard about her in-laws in the 1980s from an artist friend. She told me that they had spent the entire weekend ‘up ladders’. Somehow, probably because her husband was a high-ranking pilot in the Royal Air Force, I remember having difficulty picturing them helping their friends, the Grays, to paint their brand new conservatory somewhere in the heart of the Lincolnshire countryside.

When we moved here in 1995, I joined Lincolnshire Gardens Trust. I came to meet ‘lovely Jenny’, a founder member and great supporter of the charitable trust, at garden events and organised coach trips to historic gardens. In 2001 the tragic news came that both Grays been killed together in an aircraft accident in Italy, such a shock for their family and close friends.

So it was slightly strange to find myself sitting in the smart conservatory that I had heard about all those years ago! Alice showed me photographs of how the setting was sadly overgrown and unloved in the 1970s, when her husband Nigel’s family first moved in. Mere House was built around 1840 on land situated just beyond the Sturton boundary with views north towards the Minster Church of St Mary at Stow, according to Pevsner, one of England’s earliest parish churches.

The farmhouse was designed as a sensible, compact brick-built unit, stables, barn and small pigsties to the west of the house. For those readers interested in agricultural history, in 2015 surveyors and recorders involved in the English Heritage Farmsteads Project considered the range of working buildings around a regular courtyard ‘of Z plan’ and attached to Mere House made this remote Victorian farmstead worth recording.

In 1975, the Grays opted to put in a turning circle to the east. They kept a characterful old walnut tree in the south garden, but dismantled most of the original fruit trees, and the vegetable garden to the south west, moving both elements further west. This gave room to install a family swimming pool. The adjacent level was raised with the earth spoil, together with soil brought in from Gainsborough, an area now the site of the current pool, which Alice and Nigel have recently enclosed by serried ranks of pleached crab apples.

In 1997, after the construction of the conservatory, Jenny and Gordon invited a landscape architect with a practice based in Louth, Ian Stubbs, to further improve the gardens and give it structure. Alice showed me part of his original plan, after I had surveyed the structural details of the garden: the beautifully laid, herringbone brick paved areas, circles and walls matching the house brickwork, with smart steps down to the croquet lawn level. Noticing an armillary sphere – a framework of rings, centred on either the Earth or the Sun, representing lines of celestial longitude and latitude – I wondered, had this feature inspired a design based on a universe of circles?

The recognisable, original pattern of Stubbs’s formal topiary parterre has been kept by the younger generation Grays. Since inheriting Mere House, Nigel has taken over the responsibility for maintaining the balls and cones within a simple, pleasing geometric pattern, echoing the finial stone balls mounted on Stubbs’s subtly curved, garden walls. How he achieves those perfect circles of box remains a mystery, but his secret to keeping both the levels and straight lines to perfectionist high standard is to lay a scaffolding plank along to assist the hedge trimming. He must have a good eye!

Alice too has taken up gardening with increasing enthusiasm. “What Monty Don says, I do!” she explained. They made considerable changes to open out the garden and, in 2014, added another refreshing layer to the garden design story, by commissioning creative garden designer Nikki Applewhite, of Applewhite Design. Nikki produced a holistic plan to place the house within a coordinated setting while maintaining the fine bones of the garden. Following her direction, the beds have been mostly replanted, with some plants chosen for structure.

‘Aster’ means star. Here, beyond the armillary, were tiny stars in a ‘Milky Way’ border! Backed by a red brick retaining wall put in by the Grays to reflect Stubbs’s curving walls, lilacs, pinks and golds were all blending together, drift planting in harmony, amongst waving stems of purple Verbena bonariensis and Eupatorium, known as ‘Joe Pyeweed’, while swathes of pink buds opening white, Gaura lindheimeri ‘The Bride’, fluttered in amongst like butterflies on the prairies’ breezes.

On the way to inspect a new vegetable garden, started in 2015 beyond the orchard, a ‘cup and saucer’ vine caught my eye. The old patch, with the addition of a new greenhouse, has been given over to cut flowers, where Alice’s love of colour comes to the fore. She is happily free to explore ravishing ‘carnival’ flowers. I found her cactus dahlia collection an uplifting, incandescent show, what top garden designer Dan Pearson calls a ‘tremendous clash’.

The Grays went on to purchase a further 2.5 acres to take the new office drive and extend the gardens to the north, making the house the heart of the design. “What Nikki says, I do”! Alice said. She introduced me to several unusual sweet-smelling Chinese shrubs, Heptacodium miconioides, planted in circles, and covered in clusters of creamy white, starry flowers in contrast to growing lengths of enclosing yew hedges. If these ‘seven son flowers’ are anything to go by, here will soon be another ‘garden room’ worth exploring!

Whatever the season, the different planting and purpose of all four corners of the garden fit together as neatly as a jigsaw. Harmonious colour and texture flows together in a restful atmosphere, occasionally surprised by a fragrant rose, intrigued or excited by bold Mexican dahlias.

Those who have been lucky to explore many gardens over the years appreciate some have a charm that engage more than others, often a memorable, unique essence that one senses but cannot easily quantify. However, this is not the story at Mere House.

Changes created over two centuries, the enclosing shelter and bucolic country views provided by veteran trees along the drive and hedges along the other boundaries, have been expanded and injected with structure and knowledgeable vision by two talented designers and the layers all cemented by the growing passion of the owners to create something special, the perfect setting in every direction – and well worth a visit.