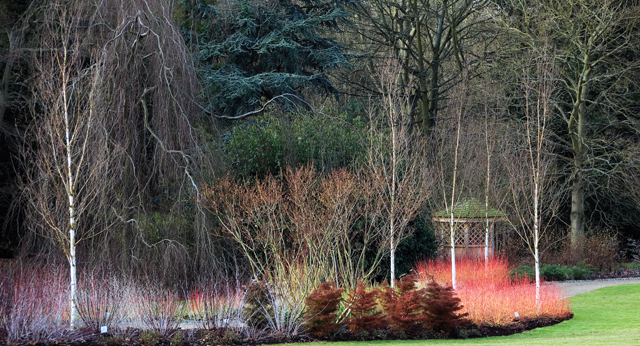 Steffie Shields highlights February’s birthday flower – the iris
As icy winter grips fingers, and weather dominates our waking thoughts, anything that flowers is a bonus. Take a walk in a designed ‘winter garden’, at Hodsock Priory, Anglesey Abbey or, increasingly popular among gardening enthusiasts, Saxby House Garden. In refreshing relief from the bland tracery of twigs against grey skies, you will find a living tapestry of willow and cornus stems, woven threads of bright red, orange and lime-green, among stark white birch, and polished copper bark, evergreen shrubs, russet beech hedges and brooding dark green conifers. At RHS Harlow Carr, near Harrogate, the celebrated Tom Stuart-Smith has designed a magical winter walk between two borders that is breathtaking and inspirational, well worth the journey.

Wherever we walk, our heads often down against the wind, our eyes search barren, dirty earth and leaf debris. Where’s the first ruffed, bright yellow winter aconite beginning to peek and unfurl at ground level? What fun, at long last, to see signs of life: emerging drifts of dainty, pure white snowdrops or, here and there, if you are lucky, clumps of cheerful crocus, and, more and more these days, rose-flushed hellebores. Some plants stand out from the crowd because of their form; others because of their colour. Iris is one such candidate that ticks both boxes.

The winter-flowering iris, Iris unguicularis, deserves a place in every garden. Each fragile, ethereal lavender to pale blue petal seems a miracle in freezing temperatures. Willam Herbert (1778-1847), Dean of Manchester, is credited with its introduction. The third son, and fifth child, of Henry Herbert, first Earl of Carnarvon, he grew up at Highclere (a beautiful country estate now better known as Downton Abbey!). A classical scholar, linguist, and a naturalist from his early years, Herbert went on to be an acclaimed botanist. Sometimes known as the Algerian iris, this superb, hardy, perennial iris is also native to Turkey, Syria, Lebanon and Israel, favouring dry, poor soil and prospering so long as the aspect is sunny and warm – probably best in this country against a south facing wall. My neighbour kindly gave me a clump when she was dividing hers. The narrow, long, evergreen, grassy foliage is tough, adding texture and suiting relaxed, natural gardens like ours. I elected for a sheltered spot on the west wall of the house, to be seen from the drive, where it has thrived – a gift that keeps on giving. From December onwards, despite the cold when you least expect a show, through to early spring, flowers emerge from the base, unfurling among whirls of strappy leaves. True, any bloom buffeted and marked by icy wind, rain and snow may not last long, but the supply of translucent tapering, nib-like spikes waiting to open seems never-ending. Other than a comb-out and scissor trim to remove bleached ‘deadery’ once or twice a year, perhaps May and September, and an occasional division in late summer, it requires little attention, and prefers neglect! No need to feed or water.

Good for cutting and bringing indoors to waft a primrose-like fragrance, each flower repays study and appreciation. Look closely. Three outer petals or falls, three inner petals, called standards, surround three sepals, a living three times table. Hence, since early medieval ages, the iris, or stylised fleur-de-lis, has been used in heraldry, painting and church architecture to recall the Trinity. Often a prominent yellow slash seems hand-painted on the three dominant petals, but there are touches of many colours and tones – purple, plum and odd white flecks. In Greek mythology Iris was the beautiful young goddess of the rainbow, dressed in rainbow colours with golden wings, the link between earth and heaven, sky and sea, the messenger between Olympian gods and mankind. Valued since ancient times for perfume and medicine, an iris flower features on the Egyptian sphinx.

The International Bulb Society continues to award ‘The Herbert Medal’ to anyone making meritorious achievement in advancing the knowledge of bulbous plants. Herbert would have been familiar with many varieties including early-flowering iris, Iris reticulata, a late winter to early spring bulb from drier climates, named for the netted or reticulate pattern on the dry bulb. Even though pint-sized, no more than three to six inches high, this iris is also fully hardy, producing a mysterious, solitary tubular and deep-veined, sweet-smelling flower. Its curve and curl fascinates the eye, as does the yellow ridge along the fall. Narrow, spiky leaves only put on a spurt and elongate stiffly as the flower fades and succumbs. Easy to grow on most light soils, these compact, bulbous irises do best planted reasonably deep. They naturalise in chalky soil in partial shade, perfect planted in drifts in a scree or gravel garden, or rockery. Miniature irises also look great in low pots. I always treat myself to some ‘new to me’ variety when buying tulip bulbs in autumn, knowing how welcome these splashes of vibrant colour will be, some like velvet, lifting spirits on drab days in February and March.

Iris ‘Harmony’ is popular, royal blue with a yellow central mark on each fall; a miniature version of the florist iris in every mixed florist bunch of my childhood. Iris ‘Purple Gem’ has slimmer petals, deep plum purple standards with lighter veining, the three largest petals with yellow and white markings, good massed under (deciduous) trees with some sun early in the year, or in clumps punctuating front borders, even peeking through snow. Now quite a few hybrids have names to remind one of acquaintances and friends: ‘George’, ‘Pauline’, ‘Gordon’, ‘Joyce’, ‘Gordon’, a hybrid of Iris histrioides var major and Iris reticulata ‘J.S. Dijt’ has slightly larger, rich, plum purple flowers where ‘Pauline’ is dusky, violet pink with large white spots on the falls. The unusually patterned dwarf ‘Katharine Hodgkin’ is cool blue, with darker veins and strangely smudged with yellow and random spots, cross-bred by patient plantsman E B Anderson and named after another generous, amateur breeder of the 1940s, ’50s and ’60s.

February’s birth flower, the iris, seems a faithful messenger of spring romance and love. This month I must remember to send my sister an iris birthday card. Living in Florida, she misses England’s array of spring bulbs. Now I wonder how miniature iris cope in the humid heat out there? I shall send the slightly stripey, dwarf ‘Gordon’, my favourite complementary colours, blue, dark blue and orange, a painterly Van Gogh combination, to make a small rainbow for her birthday.

The Garden House, Saxby is open every day from Friday 10th February until Sunday 26th February 2012. Enjoy a walk through the garden and meadows and see colourful displays of snowdrops, crocus and winter iris among winter shrubs, dogwoods, willows and hellebores.