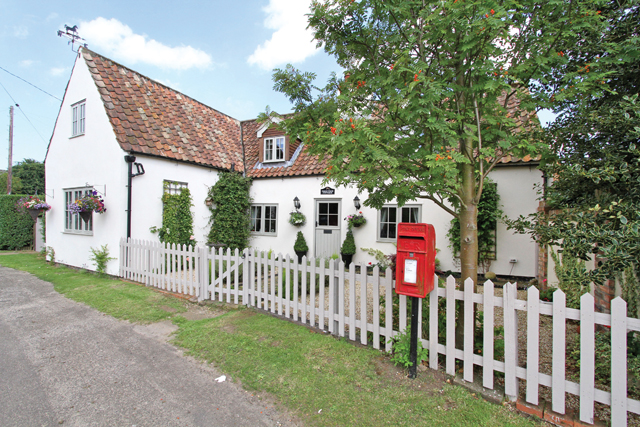 When Chris Wilkinson-White spotted Tennyson Cottage in the village of Tetford, near Horncastle, it had been empty for almost a year.
The previous owner Les Dixon, who was ninety-six when he died, had latterly lived in just one room and the house was in a dilapidated condition. In its heyday in the 1950s, it had been the village Post Office and Stores which Les ran with his wife Alice. Since it closed in the mid-1980s, only the postbox on the picket fence has hinted at its former glory.

But Chris, whose sister Claire Vines lives in the village with her family, could see the potential in the rundown building. An experienced property renovator with several projects under his belt, Chris, who also owned a cafe called Christopher’s in Skegness at the time, viewed the cottage in late 2006 and bought it in January the following year.

At the time he was living in an old mill house in Croft, near Skegness, which he had converted into three flats. He lived in one flat; his mum, Wendy Wilkinson in another, and he rented out the third.

Along with the three-bedroom Tennyson Cottage, the property included a two-bedroom house, known as Garden Cottage, to the rear, which was in a worse state of repair than the main house.

Chris, who now owns The Old Stables Coffee Shop in Horncastle with his husband Jonathan, said: “The house was a total wreck – run down, damp and pretty dismal – but I could see it was a lovely old cottage and I liked the village.”

Chris brought in a builder to do the majority of the work and mucked in himself, labouring and helping to strip out both cottages.

It is believed the original building dates back to the 1600s, having been built at the same time as the pub across the road, and Chris uncovered some patches of mud and stud walls on the side of the staircase and above the front door.

He said: “We tried to keep as many of the original features as possible, like the original beams in the lounge, snug and kitchen, but nearly everything had to be replaced.

“We stripped the roof and repaired it, relaying the original tiles and putting back the cast iron guttering, and the house was re-rendered and new windows were installed. Then the house was re-wired and a central heating system, new kitchen and bathrooms were put in.”

In the main cottage, a stud wall was removed between the kitchen and dining room to create a dining kitchen and the three bedrooms were reconfigured to create two bedrooms with en suite bathrooms.

Chris explained: “Originally you had to walk through one bedroom to get to another bedroom and into the only bathroom, so we changed the layout and made two en suite bedrooms instead.”

Once the basic work was finished, Chris fitted the kitchen himself and decorated throughout in a country cottage/modern style. It took just over a year for the work to be completed and Chris moved into the property in February 2008.

“It was nice to be finally in, as the work seemed to take forever,” he said.

Chris then spent another six months completing the Garden Cottage which his mum moved into in July 2008.

The main cottage now has a snug, sitting room, spacious kitchen/dining room with utility and WC on the ground floor, and two bedrooms with en-suites on the first floor, whilst the attached Garden Cottage – which has its own entrance and small courtyard garden area – has an entrance hall, cloakroom, lounge and kitchen/dining room on the ground floor with two bedrooms and a bathroom upstairs.

Outside, there are enclosed lawned gardens with shrubs and patio areas and views of the Lincolnshire Wolds. There is also a separate double English oak framed carport.

A year later, Chris met his husband Jonathan – a special needs teacher who was living in Witham St Hughs, near Lincoln – on the internet. The couple dated for six months before Jonathan moved into the cottage with Chris.

In April 2011, Chris sold his cafe and he and Jonathan bought a three-bedroom cottage in Horncastle town centre, which they converted into The Old Stables Coffee Shop. The coffee shop opened in October that year and became an instant success, winning several awards for its customer service and dedication to using locally sourced produce including a 2013/14 Heart of Gold Best Tea Room or Coffee Shop Award from Lincolnshire Life magazine and a Trip Advisor Certificate of Excellence Award.

Although Jonathan initially continued to teach part-time, he soon left teaching to work in the cafe and alongside Chris in his property renovation business. Chris said: “The cafe took off so quickly just through word of mouth and has been busy ever since.”

Although the couple have enjoyed living in Tennyson House and getting involved in the community in Tetford – Jonathan is Chairman of the Governors at Tetford’s Edward Richardson Primary School, where he also teaches – they have now decided to place their home on the market.

Jonathan said: “The only reason we are selling Tennyson Cottage is because we know we are good at delivering excellent customer service and we felt there was a gap in the market for a five-star bed and breakfast in Lincolnshire.”

With this in mind, Chris found The Elms at Hundleby, near Spilsby, a Georgian hall with stable block to the rear sitting in an acre of gardens. The couple gained commercial funding from the bank to turn the property into a five-star bed and breakfast offering courses to guests such as bread making, and jam making with local company Saints and Sinners. A comfortable lounge will also be available for courses in crafts or treatments such as manicures and reiki, with guests being treated to afternoon tea as well.

Work began on the renovations on 1st October this year and two weeks later, amongst the chaos of running the cafe and renovating the hall, Chris and Jonathan found the time to get married at Stubton Hall, near Newark, in front of sixty guests.

“It was a crazy time,” said Jonathan. “We were so busy with the house and organising the wedding as well. On the day before the wedding I had to say to Chris, ‘Can you focus on the wedding now, please’!”

Work on the bed and breakfast is now well underway – a new roof has been fitted and the rooms have been reconfigured to fit in en suites – and the couple plan to open the business in the autumn of 2015.

“I will be sad to leave Tennyson Cottage,” said Jonathan. “But the new house is our first house together and it’s exciting to think we will be starting a new chapter of our lives there.”

And what if Tennyson Cottage sells before their new home is ready? “We will just move into a caravan onsite with our two pugs and the cat,” said Jonathan. “It will be fine!”

Tennyson Cottage on East Road, Tetford, near Horncastle is on the market with Humberts, Lincoln, for £360,000. For more information contact the estate agent on 01522 546444.