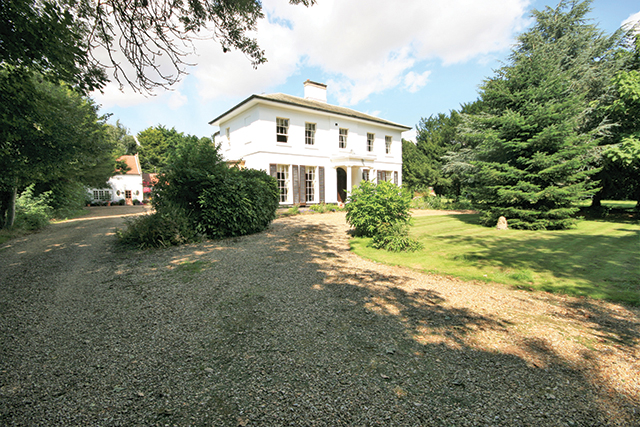 When Scott Lewis and his now ex-wife Samantha first saw Park House in Donington, near Spalding, they fell in love with it.
The couple, who at the time had two small children, were looking for a larger home than their four bed modern house in Pinchbeck. Park House, a Grade II listed six-bedroomed historical country residence nestled in nine acres of land in a Conservation Area, was certainly large. In fact, Scott admits the first time he saw it he doubted he could afford it.

Scott, who is a freelance consultant mainly for the flower industry, said: “We wanted a larger house with some land for the children so we started looking around. I spotted Park House in the local newspaper and thought it would have been mega money, but it wasn’t.

“When we viewed the house, it blew us away and we both fell in love with it. The house had such character to it and there was an acre fishing lake as well. I’d done a lot of fishing with my dad growing up so it seemed right.

“We went home, did the numbers and started negotiating the asking price down.”

Funding the purchase was Scott’s newly acquired business, Evolution Flowers, which he had acquired eighteen months previously and took from a turnover of half a million pounds to £26 million in just six years.

He had started his career in the industry at sixteen when he got a job working for Lingarden in Weston, near Spalding, which was the first company in the country to supply flowers to the supermarkets. After eleven years “growing up” in the business, he was headhunted to work for Spalding Flower Company. He bought the company after eighteen months and renamed it Evolution Flowers.

“Our two biggest customers were Morrisons and Asda,” said Scott, whose wife Samantha did the accounts for the company. “We were Asda’s sole supplier of all UK products, whether it was daffodils, tulips, chrysanthemums or any other English flower you could think of. We were doing really well and within eighteen months, we had bought Park House.”

Built in 1645 for the Gleed family and partially rebuilt in 1707, Park House is named as one of the most historic country residences in the area. Although little is known about its history, it is understood that it was originally much larger than the house that stands today. It still retains its Colonial-style front elevation and many of its original internal features, including sash windows, a sweeping staircase with mahogany handrail, flagstone flooring, Egg and Dart cornicing in the hallway and six-panel doors and reveals.

Outside, there is a converted coach house, a range of stables and a tack room and crewyard, and among the nine acres of grounds are formal gardens, paddocks, a lake with jetty and many mature trees, some with preservation orders.

When the Lewis’ bought the house, it was owned by a German couple who were GPs at Gosberton surgery. They were selling to move back to Germany to work in one of their parents’ GP practices.

Although the house was in relatively good condition when they moved in, the Lewis’ set about making improvements to their new home. First they employed the services of a company in Bourne to restore all the original sash windows to their former glory using a new resin technique, then they brought in builder Peter Cox in Lincoln to renovate the floors in the lounge and snooker room which had rotted from damp coming up from the cellar below and install a damp proof course.

“I remember sitting in the lounge, just staring beneath us at a massive hole in the floor,” said Scott.

A new £30,000 kitchen was commissioned from Colin Luesby Interiors in Swineshead with a centre aisle, marbled granite work surfaces and all mod cons including a coffee maker and wine cooler. Then all the carpets and curtains were replaced and the house was decorated throughout.

It took two years to complete the work and two years later, their children Sol (now 15) and Summer (13), were joined by a third sibling Scarlett (9). By this time, Evolution Flowers had grown from a family business to a major player in the industry, and Samantha decided to concentrate on bringing up her family and managing their home.

As the children grew up, they attended Ayscoughfee Hall School in Spalding and the older siblings went to grammar and high schools in the town.

Scott describes family life with their three children in Park House as “idyllic”.

“It would take a lot to beat it,” Scott added. “It has privacy and space for children to run around in and outside they could play football in the grounds and we would go fishing and swimming in the lake when it was really hot in the summer.

“It’s a perfect entertaining place – we bought a marquee and every year we would have a party in the garden with a singer and a hog roast. Each Halloween, we would decorate the cellars and me and my friend would dress up and terrify thirty to forty kids. They used to love it!

“I bought a full-sized snooker table to put in the games room which made it into a boys’ room, so me and my friends could be drinking and playing snooker all night.”

After six years of success, Scott sold Evolution Flowers and bought a cash and carry business in Spalding. “It was a failing business and I turned it around and made it into a success then sold it as well,” Scott said.

Four years ago, the couple went their separate ways and now Samantha and the children live in Leicester with her new partner. But Scott and Samantha held on to Park House for the sake of their children and Scott still lives there.

Scott said: “We didn’t want to sell the house straight away because we wanted stability for the children so they could still come back to somewhere they knew. We agreed to sell it after a certain period of time.”

Now Park House has been placed on the market and Scott hopes another family will buy the property and bring up their children there.

Scott, who intends to move to the Stamford or Oakham area once the house is sold, added: “I’ve loved living here but now it’s time to move on. I’m quite pragmatic about life and I’m not emotionally attached to the place but I’m sure I will be sad to leave on the day I move out.”