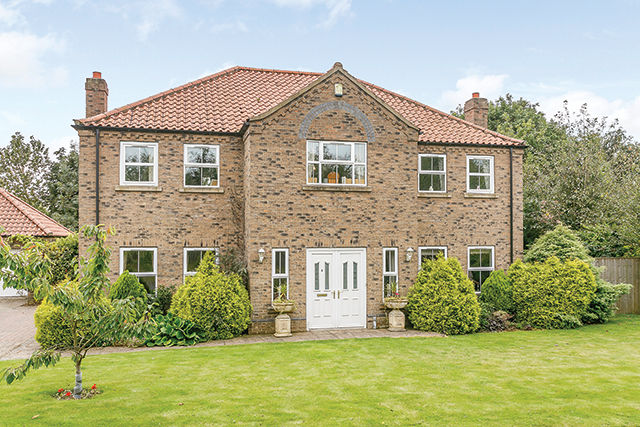 Ideal if you have designs on a family home

Hannah Dale and her husband Jack have just returned from a week’s tour of department stores in Tokyo, Japan, where their products have just launched.
Hannah’s quirky animal paintings, printed onto greeting cards and other gift ranges, were particularly well received by product buyers and customers alike. Despite a fourteen-hour flight home, Hannah gave a group talk an hour after landing in the UK and was back in her Brigg office bright and early the following morning.

Such is the life of the mum-of-three who started her business five years ago from her kitchen table. Now Wrendale Designs by Hannah Dale, which produces design led greeting cards, prints, stationery, tinware and homeware, including Royal Worcester ceramics, based on original artwork, is a hugely successful business which employs twenty-one people and has products sold in numerous countries worldwide.

Although they now have offices and warehousing in Brigg, Wrendale was created, and for the first few years run, from Hannah and Jack’s home, No 2 Middlegate Mews in Melton Ross, North Lincolnshire.

Hannah, whose business combines her study of zoology at university, her love of art and the business acumen of her former career as a stockbroker, said: “It all stemmed from needing to earn a bit of extra money doing something that I could fit around the children. I started drawing at the kitchen table and even though we have premises in Brigg now, I still do most of the artwork at home without the distractions of the office.”

Both from Lincolnshire originally, Hannah and Jack met just before Hannah started her career as a stockbroker for Morgan Stanley in London. For five years the couple had a long distance relationship – Jack worked for the family farming business and they commuted between Lincolnshire and London at weekends. But when they married in 2012, they agreed it was time for Hannah to “come home” to Lincolnshire. She said: “I’ve always been a bit of a home bird so I knew my time in London was limited.”

At first the couple rented an old farmhouse before buying their first home together at 2 Middlegate Mews. Hannah said: “I’d always wanted something old with character but after two years living with drafts and damp, we wanted something modern, easy to maintain and warm.”

As soon as the couple viewed their home, they knew it was right for them. Hannah added: “This house, unlike most modern houses which are often fitted onto a tiny plot, was one of just four houses on the development with big plots and gardens.

“It was June when we first went to look at it and the banks were all in flower down Middlegate Mews. It was so pretty and we felt like it was going to be the one for us.”

Once inside, the couple were impressed with the size of the property. “It had such a great living area and all the rooms were really large and light. It meant we could really embrace the modern way of open plan living, rather than living in small, separate rooms,” said Hannah.

But with their first child already born, Hannah found looking for a job locally a challenge. She said: “It was difficult to find work because although I was qualified for my work in London, there was nothing similar to it in Lincolnshire. I started to retrain as an accountant but it wasn’t for me. I’d always been very artistic and creative and wanted the dream of making a living from something I liked doing.

“I also wanted a job that fitted around the children so I started doing a few drawings at my kitchen table and selling them in local shops. Then one of my stockists asked if I’d considered doing greeting cards and the business took off from there.”

At first Hannah ran the business from her spare bedroom and then an office next to the kitchen. “The business expanded way beyond anything we had anticipated,” Hannah said. “It had only been something to do while the children were small for extra pocket money but one year in, my husband Jack left his work to help with managing the business.

“At one point there were five of us working from our home office next to the kitchen. Now we have offices in Brigg, warehousing in Brigg and America and supply our products worldwide.”

She added: “We are told most consistently by customers that they like the characters of the animals and their quirkiness. There is a lot of animal artwork out there but these are just a little bit different.

“With the product range, we try to add extra detail and use good quality materials, for example, our tinware is printed on the inside as well as the outside and there are illustrations on the inside of the notebooks. People appreciate the thought and details that have gone into our products.”

Since Hannah and Jack moved into their home, their family has expanded along with the business. The couple now have three children Oliver (8), Lara (7) and Amelia (3) and a toy poodle called Claude.

One of their first projects was to fill in a large pond had been at the bottom of the garden, landscape the area and then maintain the work of the previous owners who had been keen gardeners.

In the last eighteen months, the couple have modernised and improved much of the property including fitting a new kitchen, bathroom and en-suite in the master bedroom and decorating throughout.

“I’ve always loved soft greys and Farrow and Ball colours which are reflected in our product range,” Hannah said. “We have decorated the house in the same colours so it’s a contemporary twist on traditional style. We had no intention of moving so we have decorated everything to a really high standard.”

Sadly now, a bereavement in the family has meant the couple have decided to move after all. They have the opportunity to buy a house nearer to Jack’s family farm in Searby, near Brigg. Hannah said: “We’ve been so happy in this house; it’s where all our babies were brought home and we are in two minds about selling it. But it makes sense for Jack to be based near the farm.”

And what about the future of the business? “There’s lots in the pipeline,” said Hannah. “I’m painting all the time and we are adding new products to our ranges.

“We may be moving house but I will still be working from the kitchen table, after all we’ll be taking it with us!”