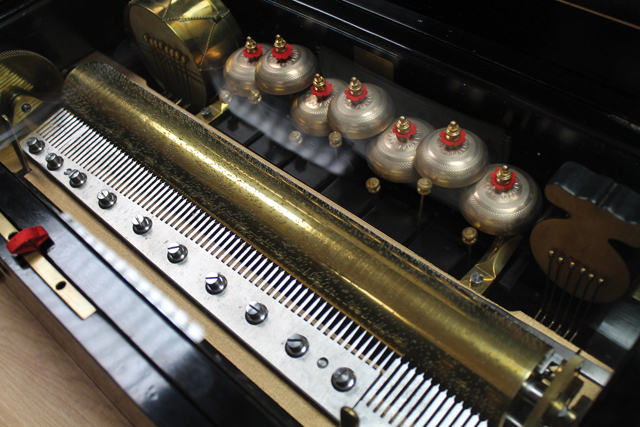 The highlights of the calendar so far this year have been the sale of music boxes, one by Nicole Frères making £12,000, the other by an unknown maker for £4,000 at our Grantham Auction Rooms.
Originally musical boxes were made by watchmakers to fit in tiny containers within snuff boxes which could fit into a gentleman’s waistcoat pocket.

The technology developed to produce the various musical box melodies involved a comb, which is a flat piece of metal with hundreds of tuned teeth of different lengths. The cylinder is the programming object, a metal version of a punch card which instead of having holes to express a programme, has tiny pins at the correct spacing to produce music by displacing the teeth of the comb at the correct time. The tines of the comb ring or sound as they slip off the pins. Adjusting the setting of the cylinder slightly, relative to the comb brings the different sets of pins into contact with the tines thereby playing an alternate piece of music.

As the music box evolved it could have any size, from that of a hat box to that of a large piece of furniture, but the majority were for the table top. For most of the nineteenth century, the bulk of music box production was concentrated in Switzerland, which had a strong watch making tradition; however, with the advent of the gramophone record in the early twentieth century, music box production and interest began to decline.

Nicole Frères produced music boxes in Switzerland from 1815–1895. The example that came up for auction would have probably been the base of a clock. These smaller music boxes were considered some of the best made by the factory, who were one of the greatest manufacturers in the nineteenth century.

The second music box that was sold was a typical table top cylinder music box, with an eight stick snare drum, seven engraved tune bells and a six beat castanet. Although unnamed, the quality and workmanship suggests that it also was produced by a Swiss manufacturer.