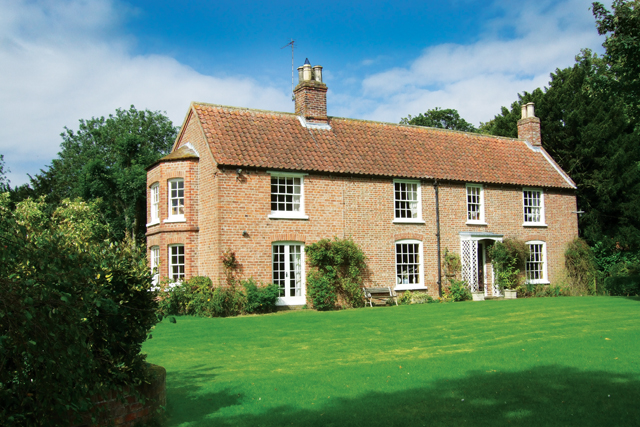 When John and Patricia Platt decided to escape to the country, it was an article in the Telegraph that drew them to Lincolnshire.
The feature described six rectories that were being sold by the church and the couple decided they were worth a look. The rectory in Church Lane, Withern between Louth and Alford stole their hearts and despite its poor state of repair, they decided to renovate the building and make it their home, renaming it The Glebe House.

Patricia, who knew the area well having previously lived in the county for twenty years before moving to Buckinghamshire, said: “My sister and I came up to Lincolnshire, stayed in a bed and breakfast and did a sortie.

“When we came across The Glebe House, it was in a very poor state, having been neglected by the church and unoccupied for three years. It was virtually derelict with trees growing out of the walls and an acre of wilderness for a garden, but I could see the potential in it.

“I dragged my husband to the house the following week and he liked it as much as I did so we put in an offer.”

It was perfect timing for the couple as the organisation John was working for, Milton Keynes Development Corporation, was about to close. Rather than take up a new position in London, John decided to retire.

When the sale was completed in August 1992, the couple embarked on a restoration project to restore the Grade II listed building back to its former glory.

Patricia, a former English and Drama teacher (latterly at Queen Elizabeth Grammar School in Alford) who has worked as an Ofsted inspector at drama schools across the country for the last twelve years, said: “All the work to restore and repair the building was appropriate to the period of the house. There would have been no point in buying a house like this unless we were prepared to do so.”

A local builder replaced the leaking roof and did other major repairs including drainage and sewerage. Windows were repaired, wiring extended and new plumbing was installed throughout the house. A new kitchen was created by removing walls in the small existing kitchen, pantry, coal store and store room to restore the original layout.

The completed house has retained its character with shuttered windows, wood floors and cast iron fireplaces. There are three reception rooms, a kitchen breakfast room, utility/boot room and cloakroom to the ground floor with five bedrooms and a main bathroom to the first floor. The master bedroom also has an en-suite shower room.

Once the house had been redecorated throughout, the couple moved in during January 1993.

In doing so, they became the custodians of one of the oldest continually occupied sites in the village, a fact which John discovered during his work researching the history of the village for his book, ‘A History of Withern’ which was published in 2005.

John said: “The church at the end of the lane was mentioned in the Domesday Book in 1086 and the rectory was in a poor state of repair in the 1450s as the Bishop of Lincoln ordered the Rector to repair it.”

His research in the Lincolnshire Archives revealed that the footprint of the old part of the house was recorded as being in place in 1578 and would have been made of mud and stud with a brick façade being added by 1746.

The house and gardens as they appear today were laid out by the Revd William Vyner who lived at the house for forty years in the mid-nineteenth century. An early Vyner was a London goldsmith who acted as ‘banker’ to Charles II; the family lived at Gautby Hall.

In 1911, the Rector of the day, whose brother was the Bishop of Lincoln, extended the house to create more room for his growing family; in doing so he provided a superb view across to the Wolds.

Once they moved in, John, Patricia and their dogs – the latest of which are Cocker Spaniel Milo and Leonberger Ziggy – enjoyed the peace and quiet of their new home.

Patricia said: “We had moved from a converted tithe barn on a noisy main road in Buckinghamshire to a very peaceful home surrounded by trees and fields.

“This house has always had its own character and a lovely feeling to it which immediately made us feel at home.”

The gardens are an interesting feature, with a Tree Preservation Order covering the entire one-acre site. From an overgrown garden covered in brambles, there are now woodland areas, formal gardens, a gravelled garden to grow vegetables and soft fruits, fruit trees and plenty of room for the grandchildren to play a game of football.

Over the years, several events have been held on the lawns including the village dog show and John’s seventieth birthday party, at which a steel band performed for seventy-five guests.

The couple have thrown themselves into the local community. Patricia is a member of Louth Choral Society and Ludensians, whilst both John and Patricia have been members of the Grimsby group of NADFAS (National Association of Design and Fine Arts Societies). Meanwhile, John, whose hobby is research into the history of sugar plantations in Demerara, was for some years a Withern parish councillor; he also enjoys the meetings of Louth Probus Club.

Now the couple have decided to place the house on the market. Patricia said: “We have had an extremely happy rural existence here – the Lincolnshire Wolds are just beyond the front garden and the fields to the back are filled with ewes and lambs at this time of year. We don’t want to move but time has caught up with us and we now need to downsize.

“We, and our dogs, children and grandchildren will have to find somewhere else we can enjoy.”