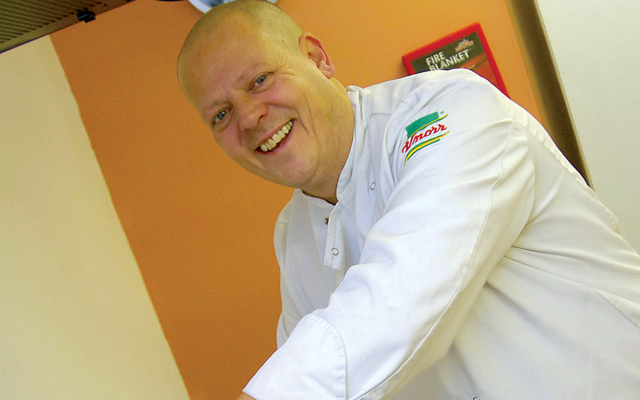 A chef of our times

‘Eating is one of life’s true pleasures and I do everything I can to help people celebrate it!’ chef Karl Sergison boasts on his website. And celebrate food he does.
Winner of multiple awards for his cooking, Karl runs Spalding delicatessen Sergi’s Good Food Store, also a restaurant and cookery academy, which offers day courses in African, Italian and French cuisine as well as a students’ survival guide and more.

To say Karl is a chef on a mission is an understatement; keen to share his passion and encourage home cooking wherever he can, he has just finished filming a series of video tutorials due to appear on his website, which will show how easy it is to recreate some of his favourite dishes. He has also recently started going into some of Lincolnshire’s schools, including Spalding Grammar School where he officially opened its new home economics facility and worked with some of the boys, in a bid to instill his enthusiasm for good, home-cooked food and pass on his expertise to the next generation of young cooks.

Karl said: “If I can get them taking stuff home and going, ‘look mum, look what we created, can we have a go?’ then that will be great. If out of 100 pupils, one of them decides they want to be a chef, then great – if more do, then even better!”

A star of the small screen too, Karl (known locally as Sergi) along with his wife Debbie and children Harry and Saffron, took part in last year’s BBC hit show Turn Back Time: The High Street where they – along with other families – were challenged to run a variety of High Street stores during six different eras, living in the conditions of the time, to see if they could still turn a profit.

Karl cites the ‘Galloping Gourmet’, Graham Kerr, as his ultimate culinary inspiration. It was thanks to watching hours of his shows during the early 1970s that he decided a career in the food industry was the only one for him.

After graduating from London’s Westminster College in 1979, Karl continued his training at the prestigious Dorchester Hotel under famous chef Anton Mossiman. He then went on to take up the post of head chef at The Liberal Club in Whitehall, where he met his wife Debbie.

His culinary skills quickly gained recognition and he was appointed by former Pakistani president Benizir Bhutho as chef on The Open Yacht Club at Temple Bar, on the River Thames. This launched Karl into the world of corporate banquetting, until 1999 when he moved his family to Belfast to launch a new catering complex to much critical acclaim.

Before he could achieve the Holy Grail of the restaurant world – a Michelin star – Karl was forced to put his career on hold while he battled cancer. But following his recovery the couple decided to open their own café/restaurant in Newry in 2001, where they stayed for three years.

In 2004 the Sergisons relocated to Lincolnshire and Spalding, to be closer to relatives, opening Sergi’s Good Food Store – a Mecca for food lovers, selling home-made delicacies such as pickles, chutneys, cakes and other tasty treats as well as speciality cheeses. Other items stocked in the deli are locally sourced or produced by the best regional and national artisans.

The restaurant followed a year later when Karl decided he wanted a new challenge and was missing the ‘heat’ of the kitchen. The intimate, vibrant setting is decorated with ‘kitchenalia’ collected by Karl during his career; in the summer months lunchtime diners can enjoy their fare in a small enclosed courtyard.

The chance to take part in the BBC’s reality show Turn Back Time: The High Street came in 2010. Switching their business to a grocers, Karl led his family through six decades of ever-changing trade – Victorian, Edwardian, 1930s, Second World War, 1960s and 1970s – where various businessmen competed to see who could make the most money during each era. Karl quickly earned himself a reputation as a shrewd salesman, keeping back stock items during one era to sell on the black market during the wartime period, and the family came out on top every week.

Speaking about the show Karl said: “It was absolutely brilliant – I had the time of my life. It was very intense during the filming, but we made some great friends and had a great time. We had to live exactly as they had done during the time periods, so during the earlier ones there was no indoor toilet and no electricity. There were no mobile phones going off – it was very liberating, although a little tough on the kids.

“The Edwardian era, which was one of opulence and luxury, was one of my highlights, along with selling a goods on the black market.”

With signature dishes including a lobster and scallop soufflé and a salmon and prawn fish cake (created for Drones, in Belgravia, and still on its menu today) Karl is now keener than ever to pass on his love of cooking to a wider audience.

In 2010 his dream became a reality when he opened Sergi’s Cookery Academy and converted an area behind the deli to include a demonstration kitchen plus workstations for hands-on practicals. Courses range from one to four days in length and offer something for all levels of ability and a range of cooking styles, including Provincial French, Medina Kitchen (North African), traditional British and bread making. There are also courses to show you how to cater the perfect dinner party and canapés and party food plus a university preparation course, which teaches everything for preparing nutritional meals on a budget, as well as buying the ingredients to using up leftovers.

Karl added: “I love sharing the joy of food with people – it’s not just fuel, I want people to enjoy every mouthful.”