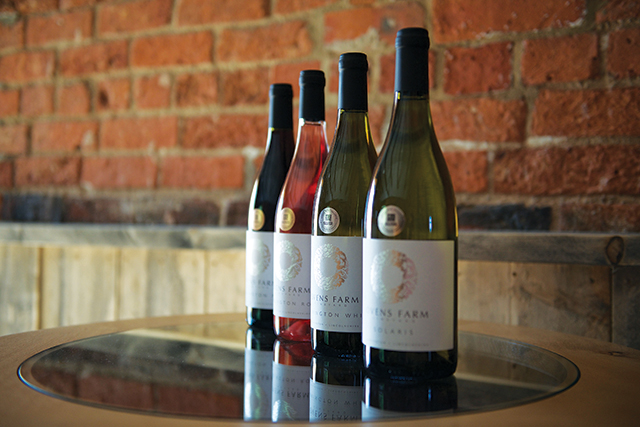 A sip of White’s wines

Lincolnshire is famed for the harvest reaped from its fertile soils and award-winning wine is amongst its list of delicious produce. Kate Chapman spoke to county wine producers Simon and Bridget White.
They planted the first vines at Ovens Farm Vineyard in Harrington, near Louth, back in 2015, producing four varieties of wine – two whites, a rosé and a red – from their first harvest last year.

Positioned on a south facing slope, protected from cold northerly winds by the ridge and woodland located behind the site, Ovens Farm is a microclimate seemingly ideal for growing quality grapes.

And despite it being early days the White’s wines have already garnered four awards – two silver and two bronze medals – from the Mercian Vineyards Association.

“Lots of people were really surprised by what we are doing, but there are around six vineyards in Yorkshire and one up in Scotland, so we’re by no means the only mad ones!” says Simon.

“It’s proving to be a huge learning curve; but one of the reasons English wine is becoming so popular, is that compared to a lot of other wine growing areas we have a long growing season, that extra time helps us to retain the flavour in our grapes.

“Since we’ve started drinking English wines ourselves we’ve found there is an awful lot going on taste-wise.”

The idea for their own vineyard came about when the Whites were looking to combine their skills on a joint venture – Simon has a background in agricultural business management, while Bridget, whose family has always farmed in Lincolnshire, is experienced in product development having worked for Yoplait, Dairy Crest and PepsiCo.

They came up with the idea of starting their own winery after tasting a bottle of Bacchus made at Chapel Down, in Kent, and agreed Simon would grow the grapes and Bridget would make the wine.

“We just thought how good it was and then said that if they can do it, then surely we can too, so we just decided to give it a go,” explains Simon.

“We looked for suitable properties all over the country, and then we found this site in 2014. “It’s said locally Ovens Farm was named so due to its tendency to be a little warmer than the surrounding area, and we’ve planted a number of wind breaks to help enhance this microclimate further.

“We spent a lot of time and money repairing and renovating the existing traditional agricultural buildings and they have lent themselves to conversion into our winery and tasting room.”

The first three-and-a-half acres of vines were hand-planted in May 2015, with a further one-and-a-half the following year, giving them a total of 6,500 vines.

“We planted as the ground started to warm up in early May, it then took three years to start producing grapes properly and a good five before production levels are anything like what we really need.

“But once fully established, the vines will carry on at this level of production for a good thirty years.”

Each year the vines put on a huge amount of growth, so require cutting back in January, when around 70 per cent is removed to encourage new growth. The grapes are harvested in September and October, when friends and family come to lend a hand, turning the affair into quite a social occasion.

When it comes to producing the wine, Simon says there are several pressing options available, depending on the grapes they are using and the type of wine they wish to make.

Some involve the whole bunch – stalks as well – being crushed together, while others require only the grapes to be squeezed. The desired end results also dictates how long and hard the grapes are pressed for too.

“Often these decisions are made at the last minute,” adds Simon. “When making our red wine the Rondo grapes are de-stemmed and crushed and then pumped into a tank where they are left to cold macerate for a few days before being pressed. This imparts more colour and flavour from the skins into the juice.

“There are lots of different methods. With fermentation we need to keep things cool. We use jacketed stainless steel vats and hold the white wine at 15 degrees, which slows down the fermentation process, which allows the top notes to continue through to the bottle.

“All we are doing is just trying to control the process; we just need to grow the best grapes we can, which require the least doing to them in order to make good wine.”

Simon and Bridget have been working with wine expert Simon Day, whose parents set up the UK’s first commercial vineyard around forty years ago, and who has been advising them on different varieties and processes throughout the growing season.

The first Ovens Farm harvest produced 2,000 bottles of wine, which is selling well.

“It’s early days, we’ve not pushed things too hard,” adds Simon, “we’ve created an in informal vineyard tour for groups, couples, even individuals, to show people around the winery, discuss how the process works and we finish off with a wine-tasting and we’ve sold almost everything so far at the farm door.

“This year we hope to double our production and then again the following year.

“It has been a huge learning curve; especially in the first year when we learnt a lot about planting and pruning, which is something we are still trying to get to grips with.

“We’re still trying one or two other systems out to work out what’s best, but so far it’s going really well. Even we were surprised just how good the wine is and we were delighted to be awarded four medals from the Mercian Vineyard’s Association.

“The hope is that we’ll start getting the wine into some independent delis, farm shops and restaurants as well now and start spreading the word a little further.”

* There are four Ovens Farm Wines, priced £12 per bottle. Solaris – bursting with flavour, it gives hints of rose petal, honeysuckle and peach; Harrington White – complex herbaceous and floral notes on the nose leading to a zesty palate; Harrington Rosé – a pale pink salmon rosé and Harrington Red – a softy fruity wine with a vibrant ruby colour. A sparkling wine should also be available in 2019.

Bottles are also being stocked at Beaumont’s Deli, Louth, and Sunnyside Up Farm Shop, Tealby. For more information visit www.ovensfarmvineyard.co.uk