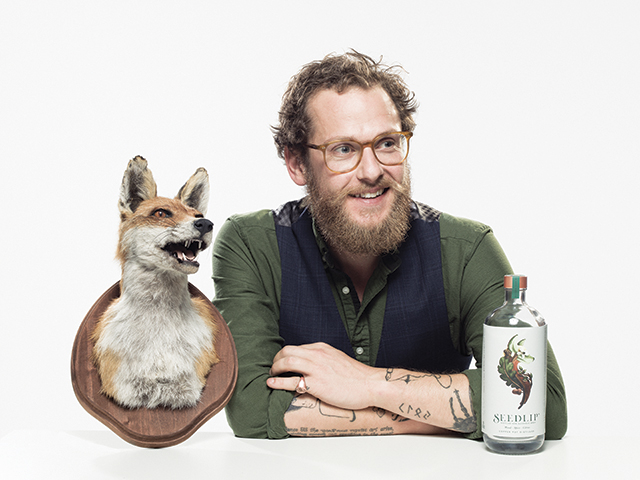 A sophisticated choice for non-drinkers

Inspired by his love of the countryside and his family’s 300-year legacy working the Lincolnshire land, Ben Branson has combined his passions with his marketing background to create the world’s first non-alcoholic distilled spirit.
Ben, a non-drinker himself, came up with the concept a couple of years ago while dining out in London, where he saw first-hand the need for a non-alcoholic drink for grown-ups that wasn’t a fruit juice, tonic water, or a sugary, fizzy one aimed at children.

After working with botanists, distillers and historians he created Seedlip to help change the way we drink and it’s already developing quite a reputation, selling in London department store Selfridges and more than fifty London restaurants.

“I love my food, I like to go and eat in nice restaurants, and you go to these great places in London – but what do you drink when you’re not drinking alcohol? You need to have something that feels like it fits the occasion.

“I remember one time drinking tonic water, thinking is this as good as it gets? So I started this to solve my own problem initially,” says Ben, who previously ran his own design agency.

Having worked on campaigns for both spirits and soft drinks, Ben already had knowledge of the drinks industry and building premium brands, but it was his own interest in herbs and his passion for history – in particular old herbal remedies – that led him to consider distillation as a way of creating a new drink.

“I’ve always been interested in old remedies – what people grew in their gardens when they didn’t have a pharmacy to pop to – as well as those made by apothecaries.

“That led me to a seventeenth-century book called The Art of Distillation, which had more than 200 herbs and spices in it, with all these recipes, and alcoholic and non-alcoholic remedies using distillation,” he recalls.

“I started thinking, Wow – this could be something I need to explore. So I bought a copper still and started looking into it properly. After watching some YouTube videos I picked some mint leaves from my garden to see if I could turn them into a liquid that tasted and smelt like mint, and I could.

“That was enough of a test, I could feel there was something in it, plus no-one else had done it before, so I started trying to find people who knew about the science of distilling to help me do it properly.”

It took Ben two years to go from initial idea to finished product, which he describes as a complex flavour to be enjoyed by grown-ups. During that time he took the plunge and left his job to concentrate fully on developing the drink, which is named after the baskets used by his farming ancestors to sow seed.

“It’s been a really steep learning curve – there has been a lot of trial and error and mistakes. You don’t just set up a food and drink business one day and be up and running the next,” he says.

“For the first product we wanted it to have some really good strength of spice. Certainly the pepper, cardamom, clove notes and cinnamon come through with some of the bitterness and barks. We’ve used two real woody barks and then two citrus peels which give it a juiciness, all nature’s finest flavours.

“I suppose it’s a bit like the first time you try coffee, red wine or whisky. Some people don’t always like them, but that’s fine. It’s definitely a thought-provoking flavour. I think the worst reaction I can get to it is indifference but you cannot please everyone all of the time,” he smiles.

The blend is sugar-, sweetener- and calorie-free and is ideal for non-alcoholic cocktails and aperitifs. Drinking suggestions include sipping it long with Fever Tree Tonic and a red grapefruit twist for an aromatic, complex drink or savouring it short with dashes of olive brine and Verjuice in a Clean Martini.

Seedlip launched in November 2015 and is selling in fine wine and spirits merchant Berry Bros and Rudd, London, via online retailer Honestly Healthy and is also served in numerous London Michelin starred restaurants including The Ledbury, Pollen Street Social and Clove Club.

Following the launch Ben was quickly forced to rethink some aspects of production after the first 1,000 bottles sold out in Selfridges, along with the second batch.

“I love the hands-on approach and doing stuff myself. I labelled 1,000 bottles by hand in November and had no idea things were going to go so well,” he says.

“It got to the point where I just couldn’t do it, so we found a company in Lancashire to put the labels on by machine, while the actual distillation is done in Germany with the process taking about six weeks, before it’s blended and bottled back here.

“I want Seedlip to remain a premium brand, although I don’t want it to be small. We are trying to solve the ‘what drink to have when you’re not drinking problem’, which lots of people across the world have.”

As for the future, expansion is already on the cards. Ben has gone from working on his own to employing three staff and extended the range with two more blends last year.

Seedlip Garden 108 was launched at the end of May 2016, and Ben is excited about his latest creation, which uses peas and hay from his family’s farm in the Lincolnshire Wolds, just north of Caistor. The 108 – the number relating to the days it takes to sow, grow and pick the peas – also includes rosemary, thyme and spearmint and is very different to the original with its green and floral tones.

Ben, who currently lives in the Chilterns, is also hoping to eventually move the brand back to his Lincolnshire roots, so he can continue the legacy of his family in the place he loves.

“I have a passion for the countryside – that had a big impact on me growing up. I love nature, the land and everything that brings and it’s something I wanted to try and get back to after working in London.

“I’m working with nature and have my own brand and drinks business, which is combining everything I love, and the faster I move back to Lincolnshire the more Seedlip can work with the farm,” he adds.