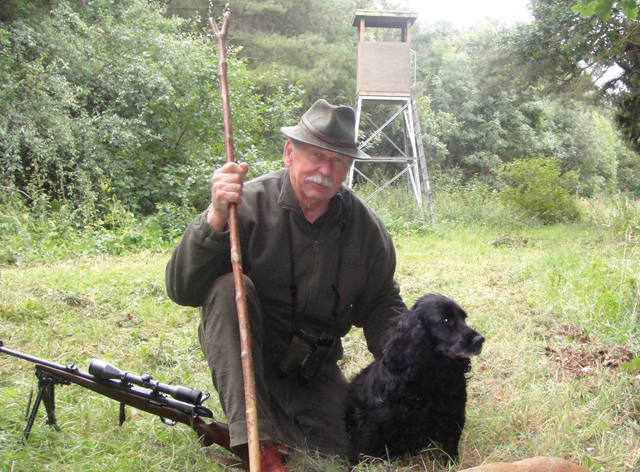 A wildlife ranger in the woodland

Malcolm Armstrong is a modest and self-effacing man and yet his work makes him one of the little known but invaluable custodians of the Lincolnshire countryside.
Malcolm was born in Lincoln and has worked as a Forestry Commission Wildlife Ranger for twenty-eight years. He left school and worked in engineering before following a love of the countryside and training as a gamekeeper. His work with the Forestry Commission has enabled him to become a champion of preserving and increasing awareness of the need to manage our many highly valued, ancient woods and landscapes. It is an environment which he relishes. “One of the best things about my job is the silence,” Malcolm explained. “I can be working in a wood and the only thing I can hear is my heartbeat.”

He is also a countryman who understands that the countryside needs to be managed in a sustainable and environmentally sound way if the landscape as we know it is to survive and be productive. He is responsible for a large area which he calls his beat, which spans from the M180, south to the Lincoln by-pass and east to Woodhall Spa. His time is spent as a professional deer manager trying to maintain the bio-diversity of the woodlands as well as giving deer management advice to landowners and talks to interest groups about his work and that of the Lincolnshire Deer Group.

“Few people realise that there are deer in every wooded parish in the county now and during my career with the Forestry Commission I have seen populations increase rapidly since the early 1990s.” In 1997 Malcolm was the initiator and driving force behind the Lincolnshire Deer Group, set up to promote a sustainable approach to the management of Lincolnshire’s wild deer population. He continues to play a central and pivotal role. “Everyone enjoys seeing wild deer in their natural habitat but their dramatic population growth has put extra pressures on the countryside,” Malcolm continued. “Deer cause considerable damage to important woodland habitats,
farmcrops and road traffic accidents involving wild deer have increased tenfold.”

“I had no idea that the group would grow in the way that it has but the members are very proactive and supportive of the role I have within the Commisson. It is a joint effort though with landowners and deer managers all coming together to share information and resources”

Six varieties of deer – Red, Roe, Fallow, Sika, Chinese Water and Muntjac – have been recorded in Lincolnshire with by far the most numerous being Muntjac and Fallow, with increasing numbers of the native Roe deer on the increase.

As well as giving advice about protecting woodland and biodiversity, the group works to improve professional standards of wild deer management by training deer managers to ensure the highest possible standards when managing the county’s deer population.

The control of this population became vital for both the health of the deer and the countryside. “Culling is a term which incites strong emotions but control of the population, particularly the females, is necessary and animals in failing health or that may have been involved in collisions with cars on our roads cannot be allowed to suffer.” With approximately two hundred deer being culled each year from Malcolm’s beat alone and many more across the county, it was also important to find a way of using this natural resource in a meaningful and sustainable way. Wild venison is a truly natural, free range product and the meat is low fat and full of flavour. In the beginning the deer group lacked a way of bringing the meat to the market for human consumption so a trading company was set up and members’ capital and grant funds were invested in a reception and storage facility where carcasses could be brought to be skinned, dressed and butchered. Three part-time employees, including an experienced butcher, are responsible for the hanging and processing of the venison. Distribution is achieved either via overnight carrier for internet and phone sales or through Ideal Lincs to farm shops and restaurants in the county.

Around sixty per cent of Malcolm’s time is taken up with deer management but he also works with the deer group members alongside the RSPCA and Lincolnshire Police to manage a network of responders across the county who respond to road traffic accidents involving deer. Malcolm is also heavily involved in the Lincolnshire Poacher Watch Scheme which is busy all year round controlling the incidence of deer poaching across the county and working with the police to abate poaching and the ensuing cruelty to the deer. Malcolm said: “To call these people poachers is doing an injustice to the poacher, these people are really urban thugs! “I do get very angry at people’s ignorance of the countryside sometimes,” he concluded,“I have seen distressing evidence of poachers’ work all too often.”

“I hope that by talking to school groups and selling the wild venison at events like the Firewood Fair this month, I can help people to understand more about my work in protecting our ancient woods and countryside.”

You can purchase Lincolnshire Wild Venison and find out a lot more about the county’s deer and the work of the Lincolnshire Deer Group online from: www.lincolnshirewildvenison.co.uk or at the following outlets across the county: