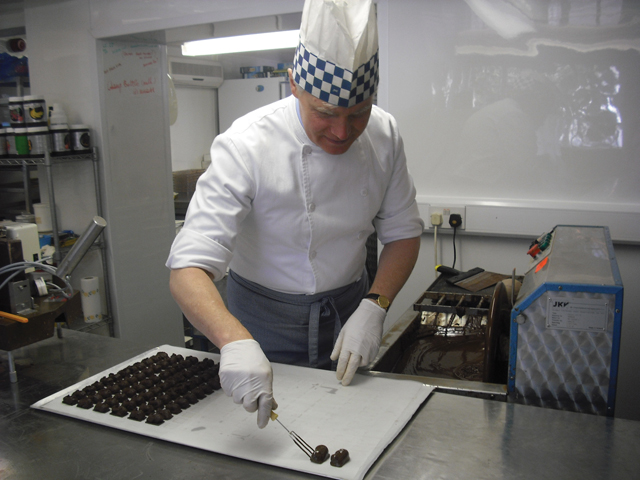 A window on the art of the chocolatier

Once you’ve tasted the velvety chocolate and the fabulous flavours created by Lincolnshire’s very own Willy Wonka, I guarantee no other confectionary will ever do again.

Chocoholics, if you’re looking for an extra heavenly treat for a loved one – or even yourself – then Jan Hansen is the man to make all your sweet dreams come true.

As a self-taught chocolatier he has been making beautiful, mouthwatering confectionary since the 1980s and is the proud owner of Hansen’s Chocolate House – a ‘chocolate box’ shop in every sense of the word – in Folkingham.

With creations including a six-foot Easter egg and a delicious cherry liqueur to his name, Jan always welcomes a challenge to his creativity and is ready to accept the most unusual requests, which has led him to design speciality items, including a chocolate chamber pot and a giant kidney.

He admits he has always had a sweet tooth and developed a taste for fine Belgian chocolates while working on the contintent in the gaming industry.

“I’d always wanted to run my own business,” Jan explained. “I’d been working abroad for about seven-and-a-half years and that’s where I got my idea from, and my taste for the chocolate.”

On returning to England, Jan, who is originally from Bedford, visited Stamford and decided it would be the ideal place to open a shop, selling imported Belgian chocolates – and Hansen’s was born.

That was in 1986 and Jan hasn’t looked back since. Word of mouth spread about the goodies on offer but it was a misunderstanding that led master pâtissier and chocolatier, Marc Regeart to his door, who in turn would pass on the expertise of his trade so that Jan could begin making his own chocolates.

Jan explained: “Somebody told him that there was a Belgian making chocolates in Stamford, which was completely wrong, and he wanted to know why I wasn’t making my own!

“He was in the process of emigrating to Perth, but he spent a couple of hours on a few afternoons showing me the basics of chocolate making.

“It’s quite a long process and took three or four years to perfect. I started with a couple of Pyrex bowls and just began experimenting. There was nobody else there to teach me, so it was all very much trial and error!”

The main lesson Jan learned was to never compromise on the quality of the ingredients and he soon began introducing a few of his own homemade chocolates onto the shelves alongside the imported confectionary.

As the old saying goes, ‘the proof of the pudding is in the eating,’ and Jan’s customers soon started voting with their tastebuds, returning time and time again for his homemade chocolates, which were soon outselling the Belgian treats.

Jan makes his chocolates from blocks of couverture and includes cocoa butter, milk powder and cocoa solids. The highest proportion he uses is seventy per cent cocoa solids, but he finds most customers prefer fifty-five per cent, which is still high compared to most British chocolate. Cocoa solids on their own taste very bitter – as I discovered when Jan gave me a piece of
ninety-nine per cent cocoa solid to sample.

Jan started off with simple recipes and has experimented with more exotic flavours over the years, including Earl Grey tea and ginger. His speciality is a cherry liqueur; Jan calls the whole fruit, complete with stalk, soaked in a special brandy liqueur recipe (including ninety-six per cent alcohol) the ‘Rolls Royce’ of chocolates.

But the simplest chocolates and classic combinations – the coffee creams and strawberry creams – are the ones which remain the most popular. As a keen innovator Jan is always looking for new ways to present his confectionary, adding: “I always strive to make my latest creation look better than the last one, it gives me that creative buzz.”

Following the property boom of the late ’80s Jan decided to move his business to Billingborough – calling it Hansen’s Handmade Chocolates – with the intention of manufacturing chocolates to sell wholesale. But his plans were soon forced to change when villagers, who heard there was a chocolatier in the village, started turning up at his door and phoning to request to buy them – so he decided to open a small shop as well and has never looked back.

It was about ten years ago when he came up with the idea to open a ‘chocolate visitors’ centre’, museum and chocolate cafe alongside the shop. It took him a while to find the right premises but Jan’s dream started to become a reality when he transformed the former Whipping Post pub, in Folkingham’s Market Place into Hansen’s Chocolate House.

Chocoholics can indulge their wildest fantasies in the gorgeous little shop, which has a special viewing window so customers can watch Jan and his team at work; there are shelves and cabinets brimming with every type of chocolate imaginable, plus chocolate animals and other novelty gifts.

But the shop is much more than that: it’s an educational place, too, where visitors can learn about the history of chocolate plus there are antique artefacts such as chocolate-making tools, posters, enamel signs and even wartime chocolate bars in their original wrappers on display. Jan also gives talks to visiting groups of more than twenty by arrangement, which includes a short video and a talk; he is keen to highlight that chocolate contains hundreds of different components – many of which have potential health benefits.

Jan said: “The higher the cocoa percentage the better – cocoa butter itself has zero per cent cholesterol. A lot of people don’t realise this and think all chocolate is bad for you, when that’s not the case.”

Sadly the chocolate cafe, which Jan opened alongside the shop had to close due to inconsistent business, but part of the area it was housed in has been transformed and now showcases the talents of other local artisans, who make and sell items ranging from jewellery, to jigsaw puzzles, art and sock monkeys.

Testament to his success, Jan now has third generation customers returning. Those who started visiting him as children in the 1980s are returning with their own children, and even grandchildren. And despite the recession Jan’s business continues to thrive – something he puts down to his chocolates being a little luxury which people can still afford to treat themeselves to.

I asked Jan if he’s gone off the taste of chocolate, after working with it all day, every day – to which he replies that he could quite happily “eat it for breakfast, dinner and tea!”

And when they taste as good as his do, I have to agree – so could I!

*For more information about Hansen’s of Chocolate House visit www.mrchocolate.co.uk, call 01529 497297 or call in at 13 Market Place, Folkingham. The centre is open 9am to 5pm Wednesday to Saturday and 10am to 5pm on Sundays.