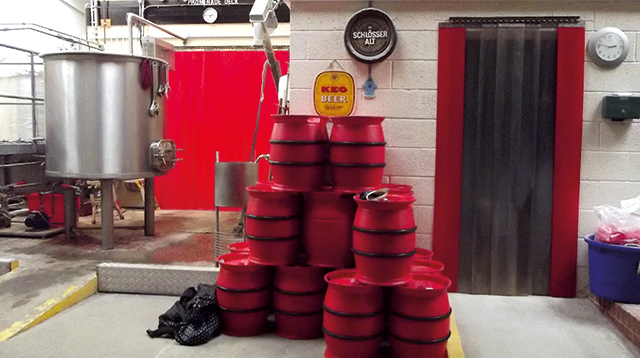 “There’s nobody here,” I said as we walked into Newby Wyke Brewery, but as we went in further somebody appeared from one of the tuns. It was Christine, the brewer’s wife and she had been giving it a good clean. They are so big that the best way is to climb inside them! Brewer Robert then appeared from around the corner and we all introduced ourselves.

I was here to find out more about Newby Wyke Brewery, which has been in operation for nineteen years. Originally started in brewer Robert March’s garage at his home, it then moved to Little Bytham behind the Willoughby Arms pub. The landlord sold the pub and the next landlord decided he needed the buildings the brewery occupied, so they moved to their present site on the Limesquare Business Park on Alma Park Road, on the outskirts of Grantham.

“Why is the brewery called Newby Wyke?” I asked Robert. He explained to me that the Newby Wyke was an old 178ft steam trawler built for the West Dock Steam Fishing Company. His grandfather had been the skipper, so he named the brewery after it. The Newby Wyke was the last of the West Dock Wykes. All the ships owned by this company were named after villages in the Scarborough and Bridlington area. The Newby Wyke’s funnel colour was black with a wide red band and now the brewery casks have similar markings. During the 1930s depression in the fishing industry some companies were sold. Newby Wyke was allocated to the Lord Line and as a result her funnel colours changed but she did keep her original name. She was eventually scrapped at Albert Draper’s Victoria Dock Slipway on 26th April 1975.

Newby Wyke brews a wide range of ales, a range of seasonal and rotated ales as well as a small number of special brews for specific pubs. The best way to keep up to date with what they have to offer is to look on their website www.newbywyke.co.uk

Most of Robert’s beers have names which come from his grandad’s logbook, which he inherited after his grandad died. However, there was one called Bear Island which Robert had named before he knew his grandad had been there.

As I wandered around I could not help but notice all the awards that the brewery’s beers have received over the years. They were proudly displayed on every wall. Christine told me she once went off to a Castle Rock Brewery awards ceremony at which they were not expecting to win anything. Robert stayed at home as he had an early morning brewing session and they actually won first prize! Apparently Robert was seen dancing around the brewery with the award the next day. It was particularly appreciated because it was voted for by actual beer drinkers in Castle Rock pubs around the region.

Robert does all the brewing and makes all his own recipes and Christine deals with the sales and admin side of things. They use local Lincolnshire barley combined with either American or British hops to create their distinctive ales. They have a wide area of distribution covering Nottingham, York and Chesterfield. Indeed I found one, Nagato, at the Eagle in Boston and very good it was too. A dry and fruity start with a burst of grapefruit at the end.

Robert and Christine told me that they had an interesting trip last year to a Czech brewery. Along with CAMRA’s brewery liaison officer, Malcolm Cooke, they visited the Pegas Brewery in Brno. This Czech city has had the right to brew beer since the twelfth century but when it opened in 1992 Pegas was the first private brewery in Moravia. Having brewed his IPA, Distant Grounds on the Pegas kit, Robert was given the honour of ringing the brewery bell to signal the end of the process. He also presented the staff with commemorative T-shirts.

Back home the same year they launched Liberty, a single hop beer, at the Lincoln Beer Festival. This was to mark the 800th anniversary of the signing of Magna Carta. There is an interesting connection to the Magna Carta with reference to beer. One of the rights enshrined by the Charter was to have your ale served in a standard measure. This law was to be enforced throughout the kingdom. This provision which also applied to other goods like wine, corn and cloth, was aimed at restricting the ability of merchants to short-change people by selling things that looked bigger than they actually were. In medieval times a standard measure of beer was the equivalent of two pints and was called the London Quarter.

As our visit drew to a close we were offered some beer to sample. I tried a small glass of HMS Revenge (4.2%) whilst my mum tried White Squall (4.8%). White Squall was named after a film by Ridley Scott, about a boat caught in an enormous storm. We both enjoyed what we had tasted and vowed to keep an eye out for beers from Newby Wyke when we are out and about.

It is possible to buy Newby Wyke merchandise on their website. You can choose from sweatshirts, polo shirts, woollen hats and pens.