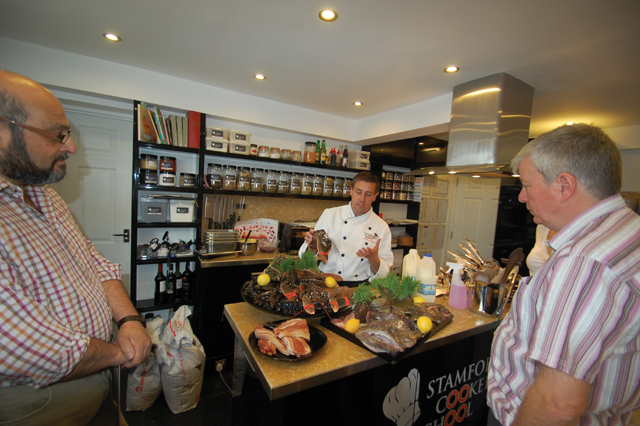 Rebecca Corbally takes a course in fish and shellfish at the new Stamford Cookery School and sees what delights it has in store.
The latest addition to Stamford’s vibrant offering of artisan food shops, deli’s and restaurants is the Stamford Cookery School. Owned by business partners Denise (administration and organisation) and established French chef Thierry Daugeron and nothing in fact to do with the sprawling Stamford School itself, this impressive teaching kitchen is a far cry from any home economics class.

I had met Thierry a few times before and knew he didn’t use intimidating tricks to get his students to cook, this was no ‘Hell’s Kitchen’ or ‘Masterchef’ and instead a group of keen cooks stood sipping hot coffee and nibbling on home-made shortbreads listening to Thierry’s tales of cooking on television as I arrived.

At the front of the room a lone lobster hopped off the huge fresh fish and shellfish display and made a run for it towards the door. The health and safety briefing was wrapped up, the lobster-on-the-run was caught and on that note, class began.

We wandered to the front of the room and inspected the fish on the display. Thierry talked us through our catch of the day, what skills he hoped to impart and the morning’s recipe selection. He picked up a large floppy plaice telling us that bright orange spots are an indication of freshness, he snapped open the huge monkfish’s toothy mouth so it gaped wide and told us it used to be given to monks for free as it was considered the ugly monster of the sea. Wicker baskets were scattered around the kitchen bursting full of fresh organic vegetables and he lifted swirling vines of aromatic tomatoes up into the air and talked us proudly through some of the twenty local suppliers of his fruit, meat and vegetables (with fish direct from King’s Lynn).

Thierry chose a whole plaice, selected the correct knife, and with just a few quick clean swipes of his blade he had four neat and dainty fillets and a cartoon carcass. He then explained that once you understand the basics of fish filleting you can apply it to most fish. He positioned the furious face of the whole spiny monkfish onto his board, ran his fingers along its slimy spine and after a few quick incisions and with a surgeon’s accuracy he freed the thick muscle of creamy white flesh. He held a large hand-dived scallop shell up high and inserted a sharp knife between its lips. He showed us a few neat shuffling knife moves, lifted the shell lid and whipped away the ‘dress’ of intestines leaving a large white gleaming piece of appealing meat. We nervously collected our bowls of fish; a large monkfish tail, a whole plaice and several large hand-dived scallops and found a free work station.

As I’d suspected, Thierry made it all look far simpler than it was. After freeing two fillets of plaice, I missed the line of the bone on the second half and left lots of fragile flesh on the carcass. He must have magic knives. Skinning was another battle altogether and after losing my grip on the slippery delicate fillet the remainder of the plaice shot across the marble work surface. After a few deep breaths and encouraging guidance from Thierry I was refocused and rearmed. Before long, I had my skinned plaice fillets, my undressed scallops, and my monkfish tail minus skin and membranes and even Thierry seemed fairly impressed.

We all finely diced shallots and onions, dribbled wine, topped seasoned scallops with chicken livers, squeezed tangy lemon juice over the whole package stacked it all neatly into shells and sealed them up with pastry before glossing it all with egg.

While the sealed shells of rich treasures bubbled happily away in the oven seeping a tempting aroma into our kitchen we whipped up mules marinieres. Quite a simple dish and one I’ve made often, but I still picked up some skills. I never chop onions anywhere near as neatly as Thierry showed us how to, and I rarely use cream or bay leaves in the broth and it made a delicious addition. As we bunched and chopped herbs, diced onions and shook pans full of bubbling creamy fishy stock full of now-open muscle shells Thierry busied himself.

He wheeled work stations apart, placed a large table in the middle of the room, piled Hambleton Bakery bread up next to a large bright green crisp salad. I heard the cork of a bottle of white wine fly off to whoops of excitement and we sat down to eat the fishy delights straight from shells and pans mopping up juices with spongey soft hunks of bread.

After lunch we tackled the thick muscle of the monkfish tail. It’s crucial to peel off all sinewy membranes so you can no longer see a purple haze. If you don’t manage this, the cloudy chunks of cooked fish will appear shrink-wrapped and be tough. After picking and plucking and pulling at membrane I sliced the tail down the middle (but not entirely in half), and then hammered it flat with a rolling pin. Once thinned I stuffed the crease with sun blushed tomatoes, a light smear of caramalised onion chutney, and a dusting of oregano before rolling it up in bacon and wrapping the whole sausage-like slippery package in (cooking) cling film. After cleaning my work station and a final farewell I disappeared happily home to bake my monkfish parcels for supper. Complete with embroidered apron I proudly presented a five-star fish course to my husband and gave myself top marks.

I consider myself a more adventurous cook since the course, and with my new found fish confidence I will use cooking as some use yoga, when the going gets tough you will find me filleting fish.

FOOD FACTS
The Stamford Cookery School runs multi-day residential courses as well as full day courses including lunch and refreshments. Half day courses are popular as are the short themed courses for children. Contact the school for team building events, catering, or private parties.