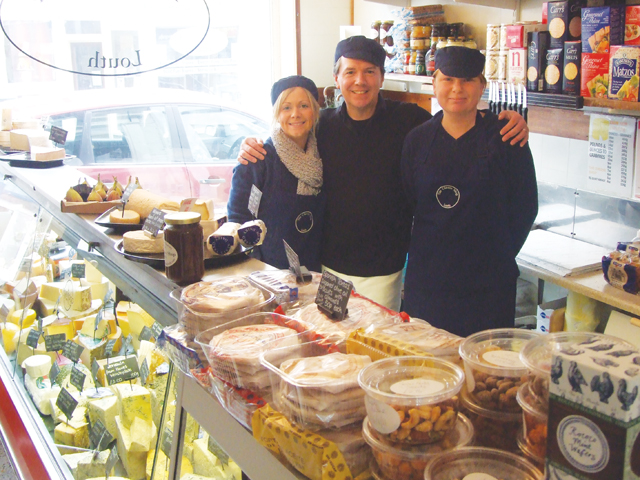 It was fantastic to look through this year’s ‘Telegraph Best Small Shops in Britain’ Awards and see that we have a National Winner here in Lincolnshire. Congratulations to Paul Adams at The Cheese Shop in Louth for winning the Best in Food category.
The Cheese Shop is located on Eastgate and even though the shop window is not large it is beautifully laid out, tempting not just me but almost everyone who came by to admire the outstanding display of artisan, farmhouse cheeses.

Once I was inside almost every customer (and Paul and his team have obviously built a very loyal following) offered their congratulations too.

I began to talk to Paul and started to understand why he has been so successful in the challenging sector of food retailing and as a cheesemonger. “I am a perfectionist,” he told me, “and I have to know that every cheese we sell is in perfect condition. If customers are planning ahead for a special meal we tell them how to store the cheese and when to bring it up to room temperature.”

Paul bought the shop four years ago with his business partner, Steve Parris, and while his motivation at the time was being a real ‘foodie’, when he began to look into cheeses he became obsessed with the diversity of origins and flavours. “As I began to understand more about cheese I realised that it is an endless subject and I am fascinated about the whole process and ‘terrior’ of cheese in the same way that some people become obsessed with wine,” Paul explained.

Shops like Paul’s have played an integral part in promoting local cheeses and The Cheese Shop stocks Lincolnshire Poacher, Cote Hill Blue, Cote Hill Yellow and Lincolnshire Red, as well as a wide variety of cheeses from around the UK and Europe. I asked which was Paul’s personal favourite and he gave me a taste of Ragstone handmade goats cheese from Herefordshire, which like most of the cheeses that Paul sells is made from raw milk. It was wonderfully creamy and smooth.

There is a huge variety of specialist French cheeses too including Morbier, a twenty-two-month-old Comte and a soft delicious San Felicien, raw cows milk cheese. And then we moved to Italy. A large round of Gorgonzola Dolce had centre stage in the window display with their engraved glass ‘Telegraph’ award. Paul told me that this soft creamy Italian cheese is one of his customers’ most popular purchases. Finally he offered me Taleggio with white truffle honey, a taste combination that Paul and his team have developed and what a wicked partnership it is!

One of Paul’s greatest satisfactions is introducing first time customers or people who come into the shop looking for a different taste experience, to new cheeses. “Sometimes people have only bought cheese in supermarkets before and I like to talk to them and find out what would really capture their imagination and show them the marvellous variety and flavours we sell.”

All the time we had been talking, a steady stream of customers came into the shop and were served by a very friendly pair from Paul’s four staff. Corrine Smith and Claire Clarke were on duty and they chatted and offered customers slivers of cheese to try before they purchased, and carefully wrapped parcels containing cheese and items from the deli section. Michele Fox also works for Paul as well as Tom Brocklebank on Saturdays. Paul’s enthusiasm and knowledge has obviously been contagious and he gives his staff free reign for their creativity and spontaneity when they are baking tarts, and flans using seasonal ingredients which are sold in the shop. As well as charcouterie, there are artisan breads and pates, wines, jams and hampers and The Cheese Shop has just launched its own Lincolnshire Chutney which is apple and raisin based.

Paul Adams’ shop is an outstanding example of the enthusiasm, service and wonderful products that independent retailers can deliver to their customers and it is great that it is in Lincolnshire. If you can’t manage to visit in person, have a look at the website where you can buy online and learn more about this charming shop and the cheeses Paul sells.