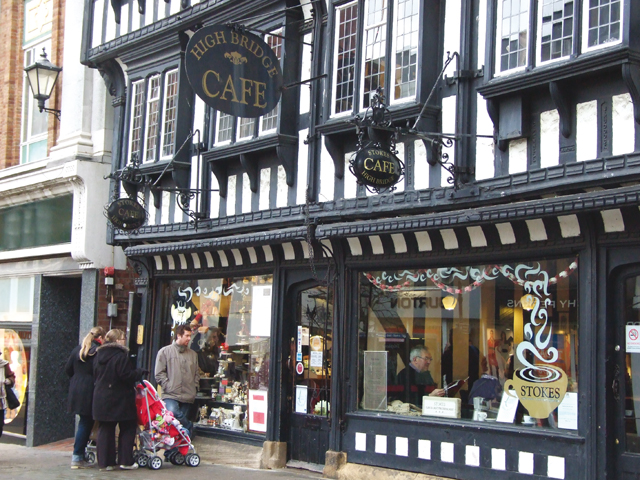 Caroline Bingham went to meet the present day family members who are behind Stokes of Lincoln
Stokes High Bridge Café occupies one of Lincoln’s most iconic and historic locations. The sixteenth century, black and white timber frame building sits overlooking views of the Witham and the Glory Hole on the High Street and is an instantly recognisable landmark in the city centre. What many do not appreciate is that Stokes of Lincoln has operated its café here since 1937 and the delicious coffee aroma which wafts into the street has been enjoyed by generations of Lincolnites.

Originally founded as a grocer’s on Guildhall Street in 1902 by Robert William Stokes, it was his own passionate interest in tea and coffee which was to shape and make a name for the business. Robert’s skill as a roaster and blender was renowned and as well as opening a café in Bailgate, he sold his teas and coffees over the counter and to other businesses. Now the third and fourth generations of the family run the company and are the guardians of its 110-year reputation for selling and serving only the freshest and finest teas, coffees and produce.

David Peel, the grandson of Robert William Stokes, has worked in the business all his life and although semi-retired he comes in most days to help his two sons, Adrian and Nick, with running the business.

Adrian began to learn the skills of roasting and blending when he joined the company aged fifteen. They may have invested in a new state-of-the-art, eco-friendly, emission reducing Smart Roast in April 2011 but it is still the experience and knowledge of the blender which is necessary to gain the consistency of the product and anticipate the trends in the public’s taste and preferences. Beans are bought in bulk quantities, usually twice a year, and the company’s processing store and head office on Mint Lane houses not only these sacks of green beans but is the location for all processing and packaging. As a natural product, the beans, their water content and their resulting taste after roasting each have their own profile depending on provenance. The Smart Roast can automate much of the process and economise on power and emissions but it is still only tasting that can validate a blend.

Sourcing and buying is handled by Nick and is from plantations all over the world, but especially Africa and South America. Nick came home to Lincolnshire and joined the family business eight years ago after a successful career as a dancer. Classically trained, his ballet career took him all over the globe and included membership of companies in Canada and Europe. His work has also included West End musicals and TV choreography. Nick still teaches dance but his role with Stokes has been focused on sourcing and buying, the retail activities of the company and developing the products across their outlets.

Stokes High Bridge Café was one of the first establishments to embrace local sourcing as a member of Tastes of Lincolnshire. Its menus, under the development of general manager, Jean-Sebastien Braen, include up to ninety-five per cent fine locally sourced ingredients, served in a menu that has a mix of traditional favourites including hot lunches, sandwiches, cakes and pastries and other dishes that reflect today’s contemporary tastes. From breakfast through to a champagne afternoon tea for two at £40, Stokes High Bridge Café’s two dining rooms and coffee shop is open seven days a week serving freshly prepared food.

And now Nick has undertaken a new venture for Stokes with the launch of Stokes at The Collection. The purpose-built café is located to the side of the museum’s foyer on Danes Terrace, Lincoln and is in a contemporary, open plan space. Jean-Sebastien has created a new menu for Stokes at The Collection including freshly made crepes with a choice of savoury or sweet fillings, piping hot soft pouch paninis, mouthwatering red velvet cake and of course the signature Stokes teas and coffees. High Bridge Café has its own dedicated coffee blend and more exclusive ones have been developed for The Collection. The present trend is for more fruity flavours in coffee and the newly launched ‘Perk-Up’, pre-ground blend includes beans from El Salvador and beans with the necessary acidic edge sourced from Malawi. There has been plenty of work for Stokes tasting groups to make sure that the blend was hitting the spot. The retail sale of ‘Perk-Up’ was launched before Christmas and the blend is available to buy from a growing number of farm shops and delicatessens as well as online and in the cafés. There is also an espresso blend called ‘Full of Beans’ which can be ground at home.

Nick has expanded into retail to bring Stokes’ coffees into people’s homes as well as more outlets. There is barista training available at the Mint Lane head office and in-store demonstrations to support the sales process through these new venues.

Consistency in quality has been part of the recipe for success that has already seen Stokes serve Lincoln so successfully during the last century. Now the Peel family are continuing this proud heritage with menus and flavours for the twenty-first century.