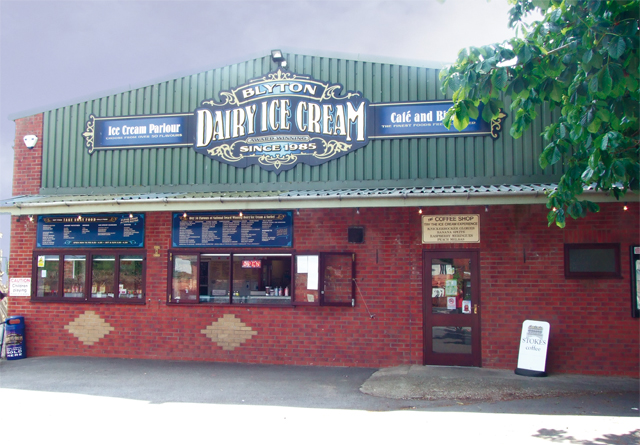 Spending my childhood in Germany, one of my fondest memories growing up was the vast amount of ice cream parlours we used to go to, so the offer to go to Blyton Dairy Ice Cream was very welcome – and with summer having finally arrived it was a timely opportunity. Located in the north of the county, Blyton Dairy Ice Cream is on the main road between Scunthorpe and Gainsborough. Whilst this is good for the passing trade, the parlour has made such a name for itself in the twenty-eight years since they first began production that word of mouth and the exciting varieties of flavours keep bringing people back time after time.

When we arrived at the parlour, we took some time to walk around and have a look at what was on offer. The main building has a traditional café feel, with blue and white checked tablecloths; outside, they have seating areas and a play park.

We were welcomed by Mary, who along with her husband Warwick founded the company in 1985. Their daughter Alison now runs the business. After choosing our seats we had a look through the vast menu which began with their extensive list of available ice creams.

Before we sampled the wonders of the desserts, we chose our lunch. I opted for a bacon, brie and cranberry panini which was served with salad and chips. It was all cooked to perfection and Mary informed us that they use their local butcher,
A H Hardwick & Son in Corringham, for all their meat. My guest chose the pie of the day, which was steak and ale. This was accompanied by garden peas, homemade chips and a generous portion of thick gravy. The pie melted in your mouth and the portion size was to my guest’s satisfaction.

It was the desserts we were here to sample though and after a long browse through the menu – the parlour has over fifty flavours and has created mouthwatering temptations – we decided to choose one from the ice cream sundae menu and one from the crepe menu. I chose the cherry Amoretti deluxe which was made from black cherry and pistachio ice cream, whipped cream, cherry sauce and Amoretti biscuit. The ice cream was beautiful and offered a nice alternative to traditional flavours. My guest opted for the Incredibly Chocolate Waffle. As described in the title this is heaven for all chocolate lovers. Made with chocolate ice cream and served with chocolate sauce, chocolate sprinkles, flakes and whipped cream on a warm waffle, it was gluttony on a plate and was well received.

After we had finished we relaxed with a coffee, made with Stokes Coffee. We were also able to talk to Mary and Warwick. They explained that when they first started the company they were trying to come up with ways in which to put the extra milk they were getting to good use. Over a quarter of a century later the ice cream is still made in Blyton’s Old Hall Farm, and using quality Italian ingredients to create the vast amount of flavours, Mary and her family have won many nationally recognised diplomas.