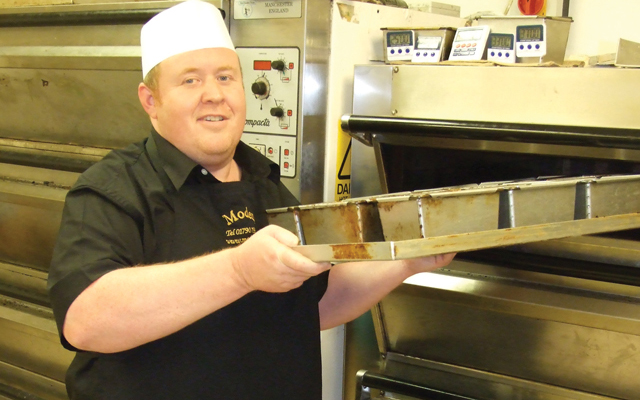 David Moden is the third generation of his family to bake plum bread in Spilsby and he has put his own special stamp on the recipe handed down from his grandfather.
David has been baking in his premises for six years but four years ago he decided to use butter rather than lard in his loaves so that they would appeal to more health conscious customers and vegetarians. The result has been Moden’s distinctive, buttery, lightly spiced, paler coloured plum bread, rich with succulent sultanas and raisins.

“I source only the best fruit I can find,” said David, “and it is tragic that so much of the Australian sultana harvest was wiped out in the recent floods. At present I am using Turkish sultanas which are fat and slightly firmer which gives a bite, which I really enjoy.”

David’s father, Michael, was the last person in the family to run the retail bakery, founded in Spilsby in 1936 by his father, Leonard. It still fills David with pride when people remind him of the wonderful cakes and bread they produced.

The family bakery found it hard to compete with supermarkets for bread and cakes and David decided to concentrate his efforts exclusively on producing plum bread on a commercial scale.

The plum bread is especially good when served with cheese or toasted and spread with butter.

“We produce about 3,000 loaves a week and up to 6,000 a week during December,” David continued. “It is hard but enjoyable work. There are only three of us including my wife, Donna, plus a part-time delivery driver.”

David trained as an engineer before joining the family business.

“I decided to focus on the wholesale and open markets to sell our plum bread and at present about seventy per cent are sold at Farmers’ Markets and food fairs and the remainder is sold wholesale to local outlets including butchers, garden centres and farm shops.”

Donna is the person who attends most of the markets and is out in all weathers but they attend most of the well established, regular fairs in the county.

It often means putting in twelve hour, six or seven day weeks, especially in the summer months and towards Christmas but David still finds time to bake his own bread at home.

After six years, Moden’s has now expanded into the unit next door and David hopes that by Christmas he will have expanded the products that the company produces. He is developing and testing a new loaf made with yeasted bread, malt and fruit that will be similar to a traditional malt loaf.

David smiled as he stood surrounded by the dough mixers and ovens in the bakery. “I have been experimenting with mixes and the ratios of malt and I think I am very nearly happy with the result.”

He is still as enthusiastic a baker as when he first began and he is eager to gear up his new bakery space and find new markets for the loaves. “I would like to sign up some of the smaller chains of retail outlets to take Moden’s loaves in the future,” he went on to say, “because I love it when people say how much they have enjoyed eating Moden’s Plum Bread and say it is the best they have ever tasted. I hope I can get a similar reaction to my new loaf.”