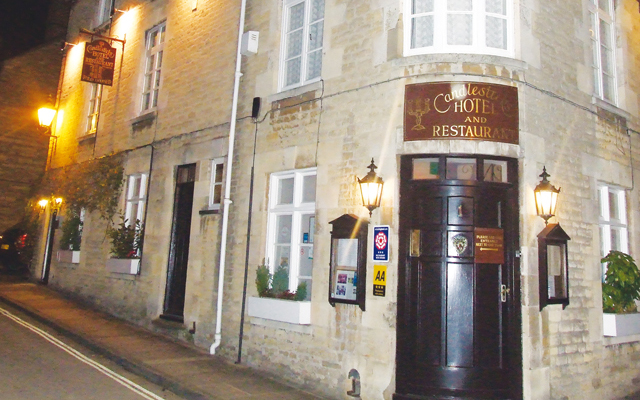 Katrina Burrill visits Candlesticks in Stamford.
Many restaurants now focus on the quality of the food they serve and the portion sizes have reduced. However, at Candlesticks the quality shines through and the portion sizes are equally as good. Driving into Stamford it feels like a step back in time. Beautiful stone cottages along narrow roads offer peace and tranquillity not often seen anymore, and the town has recently been named as the best place to live in the UK by The Sunday Times.

Arriving at the restaurant we were greeted by Mr Pinto, who showed us to a table and offered us a drink from the bar and a menu to peruse. The décor was reminiscent of a traditional pub, with elements taken from the family’s home country of Madeira and quaint English additions. There was an open fire for those cold winter evenings; however, we had picked a lovely summer’s night and the doors were open to offer a nice breeze. After we were served our drinks – my guest was pleased to see they had real ale on tap – we had to make our decisions from the menu. This is easier said than done. Whilst the options were limited to nine starters and nine main courses, everything on the menu sounded appetising. After some deliberation I chose the Avocat aux crevettes, avocado with prawns and Marie rose sauce and my guest went for the Sardine Grille, fresh grilled Portuguese sardines. Not long after we had made our choices Mr Pinto showed us downstairs into the restaurant, which has been crafted from the cellar. This had been laid out to give every diner a sense of space whilst utilising the area available to achieve seating for about forty diners. As the name of the restaurant suggests, each table was decorated with candles in traditional candlesticks and napkins which were decorated to look like candlesticks. Traditional Spanish music was also played.

When our starters arrived, my guest’s sardines were slightly overhanging the plate and were beautifully presented with a slice of lemon. My guest couldn’t wait to start and spent the next few minutes removing the large amount of meat from the sardines. My avocado and prawn salad was served in a traditional glass bowl with a doily as decoration. The salad leaves were fresh and crispy, the avocado was perfectly ripe and the prawns were succulent and juicy.

For our main courses I had chosen the Côtes d’ agneau au Romarin, roast Rack of lamb with rosemary, served with a red wine sauce and mint and my guest chose the Boeuf Steak Rossini, a prime steak cooked to choice served on a crouton topped with pâté and a rich Madeira sauce. Served in a very traditional way, the plates were brought to our table first which had recently come out of the oven and were very warm. Our meat was then brought to us and served individually. We were offered a selection of potatoes and vegetables which were also served to us. The style of service was silver service, only less formal, which made you feel very much at home.

My lamb was perfectly tender and there was certainly no feeling that the portions were small. Served in the red wine sauce with the rosemary and mint, the lamb was beautifully cooked. My guest had asked for a rare steak and was not disappointed with what was placed on the plate. Served with cauliflower, carrots, new and roast potatoes the meal was simply stunning, and the portion size was very much what my guest likes. After finishing our main courses we decided to take some time before we ordered our desserts. I chose the homemade profiteroles with cream, my guest opted for the chocolate gateau which also came with cream. The desserts polished of the meal perfectly as did the coffee and mints we had to accompany them.

After we had let our meals settle we went back upstairs where we were able to talk with Mr Pinto. It is easy to see why the food and service are so good here; he and his family are very passionate about supplying good quality produce in a setting where you feel like you are at home with great service. When we talked about his portion sizes, which is widely talked about when you speak to anyone about Candlesticks, he joked that his fellow chefs, many of whom have Michelin-starred restaurants in London, come to Stamford purely for the quality and size of the portions.

If you want to enjoy the local area whilst visiting you could book a room at the hotel and make the most of your visit.