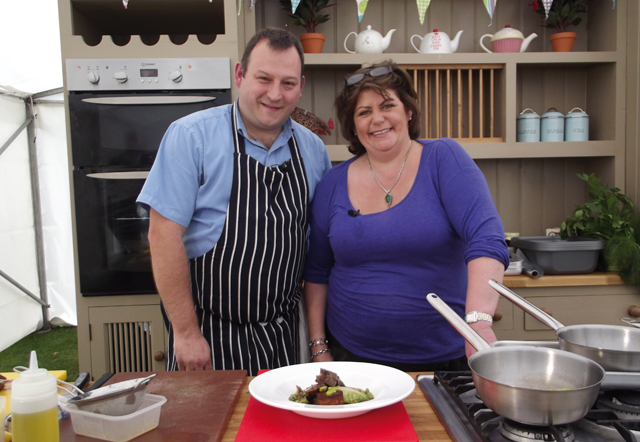 With the £22 million historic restoration of Lincoln Castle (funded by Heritage Lottery Fund, the European Regional Development Fund and Lincolnshire County Council) well underway, our thoughts are turned to our county’s rich heritage – especially its food.

Lincolnshire’s reputation as the UK’s food county is undeniable; we have an abundance of award-winning farmers, producers and suppliers on our doorstep dedicated to keeping our traditions and recipes alive. Now the spotlight is being turned on our hard-working food producers and their heritage thanks to all-new episodes of cookery show Rachel Green’s Local Kitchen, fronted by proud county chef, Rachel Green.

“I am very excited about this show,” said Rachel. “Not only do you get to see the hard work that goes on behind the scenes of our food producers, but there are traditional recipes that are simply delicious, and so easy to make at home. It’s great to see that our local food heritage is truly alive and well.”

Filming for the new show, which was created and produced by Lincolnshire based television production company East Coast Pictures, took place in June at the 1,000 Years of Traditional Crafts event held at Lincoln Castle.

Rachel continued: “This was such a fascinating event, we took a tour of the Castle grounds to see how renovations are going, and I spoke to Richard Carlton, site manager of Robert Woodhead, the construction company behind the renovations; they are using over twenty stonemasons, who are restoring the Castle walls by hand!

“The whole team are working so hard to get the renovations completed for next year, that I served them my hay baked lamb with braised lettuce dish that I made for the show. I’m pleased to say it went down very well!”

Rachel’s other dishes included potatoes with faggots and lardons; a classic carrot and parsley sauce recipe from Mrs Beeton; honey, almond and Bramley apple cake, and a cherry meringue flan, or flaon as they were once called in medieval England.

Ian Matfin, the new head chef at The New Inn at Great Limber joined in the fun and cooked alongside Rachel in the grounds of the Castle. Ian has previously worked with the likes of Gordon Ramsay and Raymond Blanc. He cooked saddle of venison with broad beans and a red wine jus, asparagus with duck egg and Lincolnshire Poacher cheese, and four strawberry desserts – a strawberry salad, meringue, granola which covered vanilla cream and a strawberry sorbet.

Ian said: “My favourite is the strawberry dessert. It is colourful, modern and best of all, we are using local Lincolnshire strawberries which have a fabulous flavour. There is an abundance of ingredients on our doorstep and the quality is superb. I believe we should support local growers and producers. Using it in my dishes means it hasn’t travelled very far to get to me and I know it will always be the freshest it possibly can be.”

Rachel said: “All in all, during filming we visit nine producers from around Lincolnshire and Nottinghamshire, and use produce from fifteen of our local suppliers to create these dishes. We also had Afternoon Tea supplied by Te@6 in Ulceby, so I made classic shortbread to accompany it too. All of our dishes are summery with a traditional twist.”

Since this was an event celebrating our heritage, it was only right that the Local Kitchen team featured some of our county’s ancient dishes too. Rachel was joined by Eric Phipps of Boston, ‘Britain’s Best Butcher’ and a local expert in historical Lincolnshire foods, who discussed delicacies such as pig’s fry (made by Mark Bernley at Te@6), stuffed chine, haslet, plum bread and curd tarts. People attending the 1,000 Years of Traditional Crafts event were invited to watch filming take place, and were able to sample some of Rachel’s dishes too.

Rachel said: “We also fed some of the organisers of 1,000 Years of Traditional Crafts, for all of their help and support.”

Three new episodes of Rachel Green’s Local Kitchen will be coming later on in the year. Julia Thompson, executive producer of the show said: “We wanted to create a traditional cookery show with a modern twist that is dedicated to the best local food, and we really couldn’t make this happen without the support of Select Lincolnshire and the Lincolnshire food community.”

Episodes are now all live on the website www.LocalKitchen.tv

Notts TV on Freeview 08 began screening on 15th October. Episodes can also be viewed below.

Method
Grease a fluted flan tin. Lightly flour the work surface and the rolling pin, and roll out the pastry. Line the prepared tart tin with the pastry, trimming off any excess, then chill for 15 minutes. Preheat the oven to 200C (180C fan oven) gas mark 6.

Bake for five minutes or until the pastry starts to turn golden around the edges, and then remove to cool. Reduce the oven temperature to 170C (150C fan oven) gas mark 3.

In a small bowl whisk the egg yolks, sugar, cream and milk together until fully combined. Pour into the flan case and arrange the cherries over the top. Bake for 25 to 30 minutes or until the custard is just set and a little wobbly in the centre. Allow to cool in the tin on a wire rack.

To make the meringue, whisk the egg whites and gradually add the sugar.

Put the meringue over the cool flan, and place back into the oven.

Once the meringue has cooked, sprinkle with icing sugar, garnish with mint and serve with pouring cream.

Method
Fry the lardons and shallots in the butter.

Remove from the pan and stir the flour into the butter. Cook the mixture until slightly brown and add the stock.

SADDLE OF VENISON
by Ian Matfin

Method
Take the venison meat off the bone, and remove the silver sinew. Season with salt and pepper.

Peel the fondant potato, cut off the ends and push a round cutter through the potato. Season to taste, and place in a frying pan of rapeseed oil, thyme and garlic. Turn once the first side has browned.

Fry the venison in a separate pan to colour, and then place in a hot oven for 8 to 10 minutes.

Place the baby gem lettuce into a pan of melted butter and season.

In a separate pan, boil some water, and all the lettuce. Cover in tin foil and place in the oven.

To the buttered pan, add the wild mushrooms and lightly sauté. In another pan, boil the broad beans, and begin to heat the red wine jus separately.

Drain the broad beans and add them to the wild mushrooms, along with the red wine jus.

Carve the meat and serve.