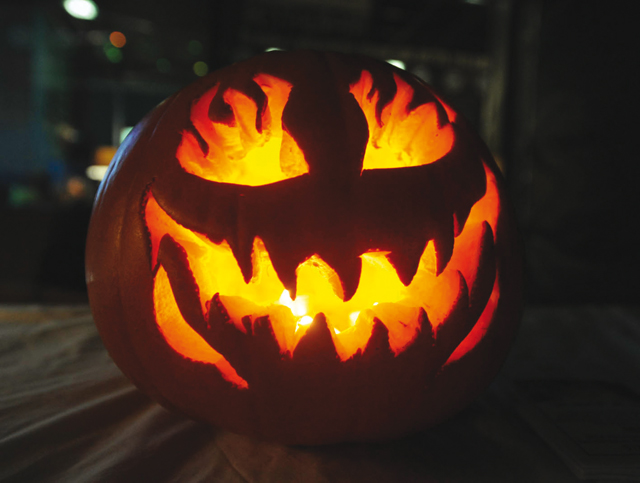 A colourful celebration of harvest time has become an annual event in Spalding, in recognition of its status as the pumpkin growing capital of Europe.
Millions of the bright orange vegetables, best associated with Halloween, are grown across South Holland every year, before being distributed to supermarkets up and down the country, as well as to buyers in Ireland and Spain, Holland and Germany on the continent.

This year the Fenland market town is hosting its twelfth annual Pumpkin Festival to honour the humble squash, which again promises something for everyone old and young, culminating with its autumnal march with a difference around the town centre.

Organised by South Holland District Council with the support of the Rotary Club of Welland Centenary and Spalding Lions, the event attracts tens of thousands of visitors to the southern part of the county, and is sponsored by local pumpkin grower, David Bowman.

This year’s Pumpkin Parade takes place on Friday, 5th October, when Spalding’s Market Place will be transformed into a sea of orange as stalls selling all manner of pumpkin related produce and foods such as cookies, pies, soups and cakes plus numerous other items to tempt visitors. Local shops will also be getting in on the act, by putting on various pumpkin themed events while other entertainments are set to include children’s rides, a spook fancy dress competition, pumpkin carving, street entertainment and cookery demonstrations.

South Holland District Council deputy leader, Cllr Nick Worth is urging everyone to come along, have a good time and support this year’s festivities.

He said: “The Pumpkin Parade is one of the highlights of the year in South Holland and we are looking forward to another colourful celebration of harvest time, which whole families can get involved with.

“The event is a real treat for everyone to enjoy and the whole programme for 2012 is lining up to be yet another fantastic one for the people of South Holland and beyond to come and enjoy.

“Join us in Spalding, bring the family and celebrate the humble pumpkin!”

Festivities will begin in the morning with a programme of family fun, while live music carries on into the evening when a torchlight parade, led by Spalding’s Flower Queen in a specially designed Cinderella coach, will tour the town, followed by local schoolchildren and their families carrying decorated pumpkins and lanterns.

The night is rounded off with a spectacular firework finale, all played out to the backdrop of more live music from the very best local talent.

Last year around 10,000 people enjoyed the festival during the day, with between 1,500 and 2,000 joining the parade and an estimated crowd of up to 8,000 supporting the evening event.

Spalding’s first celebration of the pumpkin was held in 2000, and since then the event has gone from strength to strength, growing in popularity and stature. In 2004 it won South Holland and Spalding a National Market Town Award and in 2009 saw the transition from a single day event into a week of festivities – bringing with it several new additions including a competition for local students to invent a machine to launch pumpkins as part of a throwing competition.

The festival prides itself on being a family affair, bringing the community together with attractions carefully planned for all ages and to cater for all tastes. Last year’s extravaganza also saw the addition of a pumpkin carver to the line up.

Jonathan Nicholls, who runs Farmhouse Chicken Crafts at Gosberton with his wife Angela, wowed the crowds with the skills and intricacies of his art using chisels, kitchen knives, apple corers and even a plasterer’s saw to create a range of spooky and scary Jack o’ lantern designs .

For more information about this year’s festival line-up and parade day information log onto www.sholland.gov.uk

THE PUMPKIN PEOPLE
Spalding’s spooky Pumpkin Festival would not be possible without the continued sponsorship of farmer David Bowman, who grows between three and four million of the squashes every year, on several giant pumpkin patches, all within a ten-mile radius of the town.

He supports the event by donating thousands of pumpkins free of charge for local children to carve, decorate and carry in the parade around the town centre, which marks the end of the festival.

Mr Bowman’s pumpkin growing business was started around forty years ago, by his father Edward, who originally grew a mixed variety of crops including marrows, courgettes and red cabbage, but as the demand for pumpkins increased they eventually became his main crop.

He says the Lincolnshire silt soil is ideal for growing the vegetable, which can be extremely temperamental to cultivate, adding: “We’ve been concentrating on the pumpkins solely for the last fifteen years.

“There are 500 varieties but we only grow a handful, as most of them are too big for what we want.

As well as Spalding’s annual parade Mr Bowman has also grown a special crop of Mickey Mouse-shaped pumpkins for Disneyland Paris’ Halloween Festival. For that event last year he used a specially designed mould, which was fitted to the pumpkins during the early stages of their growth to give them that distinctive Mickey silhouette.