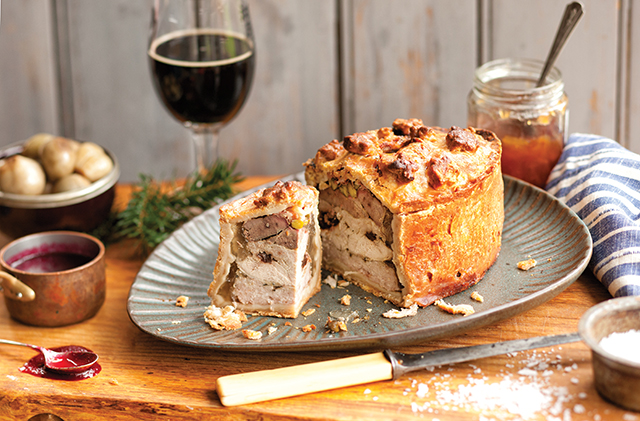 Chef, author, TV presenter, demonstrator and food campaigner Rachel Green has been nominated as Game Hero for the 2019 Eat Game Awards as well as a Lincolnshire Champion in the Lincolnshire Life, Taste of Excellence Awards 2019. Here, she shares some invaluable Christmas tips and a game recipe which is bound to ‘wow’ your guests.

B.C. (BEFORE CHRISTMAS)
• If it’s the first time you’ve ever done Christmas (or even if it isn’t) – less is more. Whatever you do, do it brilliantly… just keep it simple. Greatly executed accompaniments can make all the difference and can always be made in advance.
• If you’re lucky enough to have a dining room, then set the table a couple of days before the big day.
• Take the cheese out of the fridge at least 2 or 3 hours before you serve it. Or, if you’re lacking space in the fridge, put it into a secure Tupperware container (to ward off cheese predators) and pop into an outbuilding or on the windowsill.

THE UNEXPECTED GUESTS
• When people drop in for a drink, have a stock of pigs in blankets or homemade cheese straws in the fridge ready to pop into the oven at a moment’s notice.

UNDER STARTER’S ORDERS
• I suggest an informal mezze / smörgåsbord for a starter – so I’d do a baked brie, smoked salmon, serrano ham, game terrine with a kumquat chutney – served with hunks of farmhouse bread or even homemade (in advance, of course) crackers. An easy peasy free for all.

VEGGIE, STEADY, GO…
• Prepare veg well in advance. For root veg like potatoes, carrots and beetroot, you can roast them the day before and then just re-heat on the day. For other veg (beans, sprouts, carrots, broccoli etc), here’s what I do and it really is the biggest time-saver:
• Top & tail them
• Chop them
• Blanch them for 3-5 minutes (depending on size and density) in boiling water (and if you have two pans on the go, you can use the same water for all the veg and then cool it and save it for the gravy!)
• Plunge them into iced water
• Drain them
• Keep them in the fridge in a sealed container until you’re ready to re-heat them
• For the vegetarians – make them something delicious like a veggie Wellington. Just make sure that it goes with everything else that you’re serving.

FOR THE BEST BIRD
• Don’t get too big a bird and do ensure that what you get will fit into your oven.
• If someone else buys the bird and it is too big for your oven, panic not. You can always barbecue or smoke it instead.
• Let the bird rest for at least an hour and a half (not under foil) after you take it out of the oven. This will give you plenty of time for other oven needs after you take the bird out.
• Put the turkey giblets around the meat with onion and a little water while the bird’s roasting… the giblets will roast too and you can use all the rich, unctuous juice they give off for the gravy at the end.
• Talking of gravy, I always add a glug of marsala or Madeira into mine, with a huge dollop of Tiptree redcurrant jelly and a couple of tablespoons of mushroom ketchup. These really add to the richness of the gravy. And make sure there’s plenty of it and that it’s piping hot. If you have any left over, you can always make a turkey pie with it.
• One of my favourite things to eat over the game season – and Christmas is a great time for this – is a selection of roasted birds… so serving up a pheasant, partridge and duck, for example, gives people more choice and they’re a lot quicker to cook. And it’s also a visual feast.
• If you want to avoid the most challenging item on the Christmas washing up list, when you cook your meat or bird, buy some large reinforced tinfoil trays. Just remember not to throw the juices away with the tray – that would be a grave(y) mistake!
• If you’re cooking goose, take it out of the fridge 2 hours before roasting. Put it into a roasting dish and carefully prick the skin with a fork. Then pour over a litre of boiling water. This will help crisp up the skin. Remove the giblets (if this hasn’t already been done) and stuff the cavity with a cut apple, two onion halves, orange chunks and sage leaves.

HOT PLATES – BUT NO ROOM IN THE OVEN?
• Like the gravy, plates need to be piping hot… you can put them on a short cycle in the dishwasher to coincide with when you’re sitting down or just rest them in a washing up bowl of hot water for a few minutes before drying them.

GET SOME HELP
• Delegate where possible… especially when it comes to serving drinks. People like to feel useful and it will take the pressure off you.

SWEET RELIEF
• I always buy a great quality ice cream to go with Christmas pudding, mince pies and Christmas cake. If nothing else, you can also use it for an affogato (bit less full-on than traditional Baileys) or keep the kids quiet with it!
• Create a cranberry ice bowl. Take a large freezer-proof bowl… half-fill with water and fresh cranberries (you can always get them frozen if you can’t find fresh). Place another smaller bowl on top, being careful not to let the water and cranberries from the bottom bowl into the smaller bowl, but gently pushing down and securing with a little more water. The cranberries will be pushed up to the sides. Freeze for at least 4 hours and when you remove it from the freezer, you have a beautiful frozen water and cranberry bowl, which you can use for fruit, ice cream etc. It looks really impressive on the table and is easy to make. Just ensure you put something underneath it to catch the drips as it starts to melt in your toasty Christmassy house or flat.

THE DAY AFTER
• I always make a celebratory game pie for Boxing Day… see my recipe below. It’s always a hit and you can make it two or three days in advance.

CELEBRATION GAME PORK PIE BY RACHEL GREEN
METHOD
• Preheat the oven to: 180°C/160°fan/350°F/gas mark 4
• Silverwood Medium (0.9kg) Country Pie Mould
• Sift the flours and salt into a mixing bowl. Rub the butter and lard into the flour until the mixture resembles breadcrumbs. Make a well in the centre of the mixture.
• Heat the lard and 100ml water in a small saucepan over a medium heat. When the mixture is simmering, pour it into the well in the flour mixture and stir to combine bringing together as a dough.
• Tip the dough onto a lightly floured surface and knead until smooth. Roll out ¾ of the dough to the thickness of a pound coin and line the mould, pressing the pastry well into the base and sides of the tin, leaving the excess pastry hanging over the edge of the tin. It is a very forgiving pastry so if it tears, it can be easily patched up.
• For the filling, put the minced pork into a bowl, season with salt and pepper and mix in the thyme and nutmeg. Spoon the mixture into the pastry case and press down with the back of a spoon, making sure there are no air pockets. Place the pheasant breasts on top of the pork mixture followed by the cherries. Follow with a layer of pigeon breasts and then scatter over the pistachios. The pie needs to be well-packed so if there are any spaces, add some more game.
• Roll out the remaining pastry until it is large enough to form a lid for the pie. Brush the overhanging edges with water and place the lid on top, squeezing it together at the edges to seal. Trim the excess pastry, decorate the top of the pie with any leftover pastry and flute around the edges. Make a hole in the centre of the lid and chill for 30 minutes.
• Put the pie onto a baking sheet and brush the top of the pie evenly with some of the beaten egg. Put into the preheated oven and cook for an hour. Take the pie out of the oven and remove the pie from the tin. Brush the sides of the pie with some of the beaten egg and pop back in the oven for a further 30 minutes until nicely browned. If it starts to brown too quickly, cover loosely with some foil. The internal temperature needs to be at least 75°C.
• Once cooked, remove from the oven and leave to cool and chill overnight, or for at least 4 hours.
• Soak the gelatine leaves in cold water for 5 minutes, remove and squeeze out the excess water. Heat the stock until almost boiling, remove from the heat and stir in the gelatine. Leave to cool to room temperature.
• Pour the cooled stock into the pie through the hole in the lid, pouring in a little at a time, allowing a few seconds before each addition until you can see the gelatine at the top of the pie through the hole.
• Place the pie back in the fridge for another 2 hours to allow the jelly to set.
Eat the pie within 3 days.
www.rachel-green.co.uk

To vote in the Eat Game Awards final for your favourite chef, restaurant, pub, farmers’ market or street food stall, game meat product, retailer (big or small), butcher and hero – all specialising in game – go to eatgameawards.co.uk/vote/ until 10th January 2020.