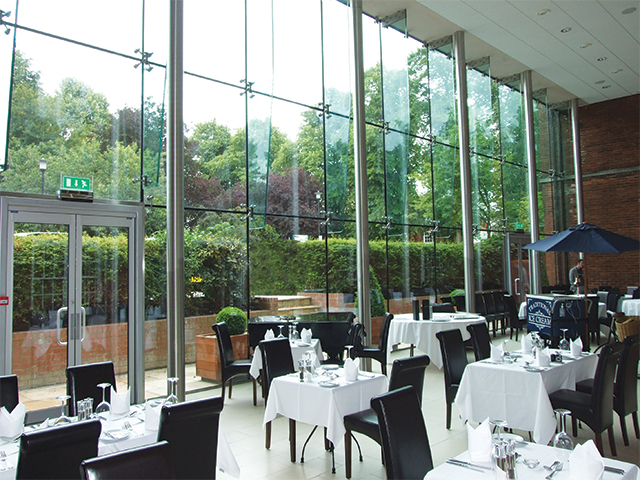 Charlotte House, Lincoln was host to our diner this month
Nestled next to the magnificent Norman Castle in Lincoln, Charlotte House Hotel is set in eight acres of landscape gardens. From the outside the hotel makes a dramatic first impression.

The hotel boasts a wealth of rooms available for residents and non-residents. Its most recent addition is the Orangery which is a fantastic mix of old and modern decor. The hotel also offers a comfy lounge where guests and diners can enjoy an array of drinks available from the traditional bar. The guest accommodation offers a selection of rooms which will suit any visitor to the city and rooms offer a fantastic view of the surrounding area, both the castle and the vast area of landscaped gardens. The gardens are used throughout the year for an array of different events including the famous Lincoln Christmas Market and also live concerts. In recent years they have seen performances from stars such as Status Quo and the Sugarbabes.

The hotel has won many accreditations over the years, and 2010 is no different. This year alone they are recommended in the Michelin Guide and are still a 5 star awarded hotel by AA standards.

The hotel has only recently introduced a formal dining room and restaurant, but it is clear to see that this has worked well for them. On arriving we were offered drinks from the bar and were shown to our table. The dining room offered a calm and relaxing atmosphere and it was obvious from other diners’ comments that the new addition to hotel has been a success. Our waitress offered us a selection of meals available from two menus, the à la carte and the table d’hôte. Prices start from £5.00 for a starter to £13.00 for a main meal. The table d’hôte menu prices start at £16.95 for two courses.

Whilst we perused the menus we were offered a selection of home-made bread with both paprika and garlic and herb butter. The bread was freshly made and was a fine example of what was to come. After making our selections (we chose from both menus) we were given a cup of home made broccoli and stilton soup. The soup was delivered in a small cup and was a perfect entrée to begin our meal. Whilst waiting, we were able to take in the ambience of the room. Before becoming the dining room, the room had been used as a lounge and it is clear that they have kept the atmosphere using delicate colours and furnishings.

For our starters my guest ordered prawns, which were marinated in coriander and chilli butter and then char-grilled. They were served on a bed of salad which made it very light and tasty. I chose the duck egg, which was served with mustard frills, a Parmesan cream and Parma bacon. The chef had made a fantastic job ofn the presentation and although it looked too good to eat we tucked in with a great anticipation. We were not disappointed. Having never had a duck egg before, I will certainly be adding this to my list of foods to order again. Both of our starters had tingled our taste buds and we were excited at what would follow.

For our mains I had chosen the pork belly from the à la carte menu. It was accompanied by a basil and saffron mash potato, apple puree and pan juices. The pork was cooked exactly to my liking and was very tender. The chef had also worked his magic on the crackling which was perfect. The pan juices and apple puree complemented the pork perfectly. My guest opted for the grilled cutlet and rump of Lincolnshire lamb and this was accompanied by hand cut chips and a side salad. We both commented on how tasty the lamb was and how easily it came off the bone.

Whilst letting our main courses settle we were able to talk to our waitress who let us know that the dining room had been very popular since its opening. It is clear to see taking a look around that Jonathan, the owner of the hotel, has been able to grow the hotel from strength to strength and is always looking at new ways to make guests experiences memorable. Unfortunately as we had visited in the evening we were unable to make the most of the gardens, but from previous visits I would recommend a walk around to take in the magnificent views.

For our desserts we were recommended to try the cheesecake and I opted for the coffee crème brulee. The cheesecake was infused with raspberries and was accompanied by clotted cream which made a tasty yet light option to end our meal. The coffee crème brulee had a great taste and the caramel had been heated to perfection. It was served alongside vanilla ice-cream which was rested on crushed pecan nuts and home-made shortbread biscuits.

The hotel is currently promoting their fantastic Christmas party menus and their New Year’s Eve Masquerade Ball which includes a five-course meal in the new Orangery.

It is easy to see that the restaurant is going from strength to strength and the next few months are going to be a very busy time for Jonathan and his team.