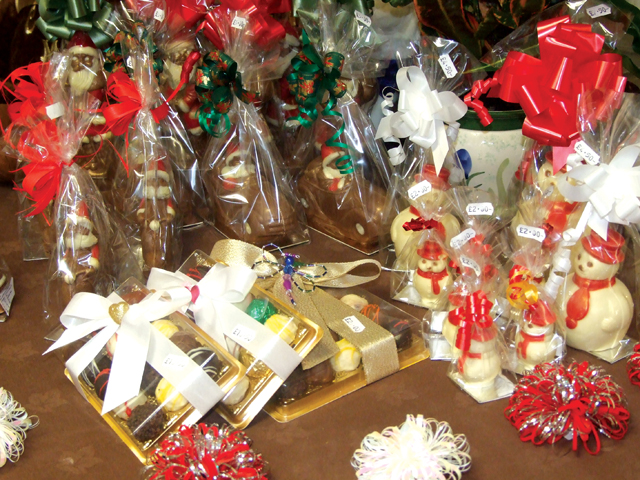 Caroline Bingham went to Willingham to meet the team behind The Chocolate Drop
Meeting Rosanna Benn and her business partner, Alan Dixon it is hard not be bowled over by their enthusiasm for their subject – chocolate. Before I had chance to put my handbag down, tempting taster pieces of chocolate were offered to me and who can resist? Certainly not me!

It is sixteen years since Rosanna gave up teaching nutrition and home economics to pursue her dream of sourcing and selling her Special Edition, as she named it, chocolate.

“I had always loved chocolate but I became intrigued by the different flavours and the provenance of the beans. It was my dream to go and see where these extraordinary pods came from and how their contents are transformed into this delicious super food,” she explained. Her dream was finally realised six years ago when Rosanna visited Venezuela to see some of the rarest cocoa pods in the world, growing in the plantations and forests.

The couverture (base chocolate) that Rosanna and Alan buy as plain, dark or milk is sourced from Germany and Belgium but made from Fair Trade beans from Ghana. The product is organic although not certified, as this is an expense the local farmers cannot afford. I watched as chocolatier, Pauline Callaby tempered pans of milk and white couverture. The delicate process of warming and cooling to precise temperatures fixes the cocoa solids and when executed correctly gives fine quality chocolate its distinctive ‘snap’ when broken.

“Mass produced confectionery,” said Rosanna, “bends rather than breaks because of the high vegetable oil content.”

Rosanna decided in the early days of her business that she would enhance her chocolate with naturally sourced essential oils and flavours. No concentrate substitutes either – so just real alcohol when required. The resulting bars, buttons and moulded chocolate shapes are made from entirely natural ingredients as well as being gluten, lactose and nut free.

“We have introduced new ranges of truffles since we built our new kitchen and cafe last year and flavours of chocolate come into fashion. This year rhubarb has been an absolute sensation.”

Finding time to build the new kitchen had been another long-term ambition fulfilled and it was with great pride that Rosanna togged me up in hat and overall to show me around. Pristine and sparkling, the production process has a flow around the layout with warming kettles, mixing pans, racks for drying moulds and Pauline deftly filling and levelling moulds while the chocolate was at just the right temperature. Special tints on the windows regulate the amount of heat thrown into the kitchen
by sunlight, avoiding dramatic fluctuations which may leave a bloom on the finished product. Once cooled in the chilling area, the final stage of wrapping and packaging is completed by Susan Plaskitt before dispatch or display in the shop.

There are over thirty flavours of chocolate bars on sale as well as moulded figures and Victorian style buttons. Bestsellers this year, in addition to rhubarb, have been butterscotch flavoured milk chocolate, dark chilli or ginger, lime, cinnamon, coffee and one of my favourites, strawberry and black pepper.

The new cafe is serving teas, coffees and a thick, hot, Spanish chocolate which is drunk with the aid of a small spoon to be sure to get the very last drop. The Chocolate Drop, as the new signage echoes, is decorated in the exact colours of white, milk and dark chocolate and is open for passing visitors and for pre-arranged educational groups.

Rosanna and Alan are almost evangelical about the health enhancing properties of cocoa beans, butter and nibs. Alan may already be familiar to readers from the interesting, illustrated talks about chocolate that he presents to groups around the county. One area of the shop is given over to The Healthy Table. Piled with bars of pure cocoa butter, cocoa nibs and chocolate of sufficiently high cocoa solids and natural flavourings such as cinnamon which make them suitable for diabetics, the table has generated plenty of positive feedback.

“We have had people who have suffered for years from psoriasis or problematic skin because of diabetes who have been benefited enormously by rubbing cocoa butter regularly onto their affected skin.” All of the products can be bought in the shop, online or at local stockists such as Teddies and Chocolate Gifts in Horncastle.

Personalised bars are popular throughout the year for weddings, christenings or to announce a baby’s birth but Christmas was the dominant theme. I watched as Pauline started the next stage of creating an eighteen-inch-high Santa. “Think backwards and outside in,” she explained as she showed me how the eyes and delicate detailing was the first layer to be painted into the mould. They had just received an order for eight of these, so Pauline had plenty to keep her busy alongside the reindeers and Christmas puddings still to be moulded.

Finally, I asked Rosanna what she would recommend as a chocolate treat after Christmas lunch. “Without doubt it would be our Mixed Spice Victorian Buttons. They have a substantial bite with a kick of spice and are perfect with a cup of coffee.”
Indulgent and healthy? I couldn’t resist.