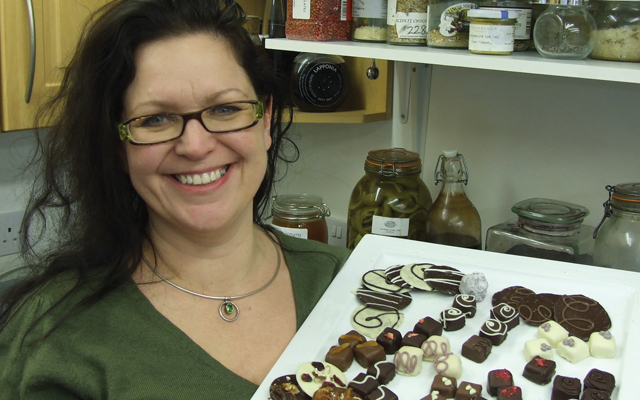 Caroline Bingham went to meet an award winning county chocolatier
As soon as Fiona Sciolti and I started talking, it was obvious that certain flavours and perfumes took us both straight back to our formative years, which included many flavours only found in the wild: blackberry, sloe, elderberry, raspberry, honey, lavender, mint, cherry, plum – and what about cowslip? Fiona enjoyed a timeless, country childhood. Not in Italy as the name would suggest, but in leafy Warwickshire; the daughter of an Italian father and an English mother, both passionate about their food. We sat comparing notes and it was immediately clear where Fiona gets the inspiration for her delicious, award winning, botanical chocolates. But just how Fiona has developed her business (now four years old and based at her home in Brigg), is testament both to her creativity and her drive for perfection.

At college Fiona studied fashion and also studied in jewellery design before she met and married her husband Giles. Four children later and Fiona had become absorbed in cooking and in particular had become a purist at baking: always making bread and cakes which she often let family and friends sample. Soon they were asking her to make specific orders and Fiona began to read up more on confectionery. “One of the first things I remember making were truffles as Christmas gifts,” she explained, “and they went down so well I moved onto making flavoured chocolate thins and experimenting with different natural flavours.”

It took more than two years of research into the subject before Fiona felt the time right for her to offer them for sale but when she did, the response was more overwhelming than she could ever have imagined. “Not only did people really like my chocolates, but they actually bought them!” exclaimed Fiona, still sounding slightly surprised that she had created such a desirable confection.

Fiona’s botanical chocolates are a totally artisan product in that she creates all the ganaches and flavours herself and hand-dips each chocolate individually. You can see the influence of her training as a jewellery designer in the delicate decoration to the top of each chocolate which not only adds another dimension of flavour and texture, but also denotes the chocolate’s flavour.

She estimates that at least seventy per cent of her ingredients are sourced within a thirty mile radius of Brigg: Roe’s Dairy Farm at Barrow-upon-Humber supply all of the rich double cream, while strawberries come from the farm next door. Blackberries and cherries are picked from the lanes around Brigg and Cadney and the blossom honey comes from Hedgerow Apiaries in Brigg and as a consequence, the bees gather their pollen from the gardens and fields around Brigg, including Fiona’s own garden.

There are now eighteen flavours featuring in the Sciolti Chocolates range and I was lucky enough to be able to sample most of them during and after my visit. Fiona’s appreciation of complex and complementary flavours shines through and they are chocolates of the highest quality which should be nibbled slowly to best appreciate the subtlety of the flavours that each present. Fiona showed me jars of elderberries soaking in alcohol, blackberries in apple-brandy and hand-candied lemons and oranges waiting for their time to be added to a ganache or used as decorations. Raspberry and pink peppercorn is a brilliant combination which enhances the flavours, as salt does to a good quality chocolate. One of Fiona’s first and still best-selling products are her chocolate thins which she flavours with mint, ginger or orange and poppyseed; and it was the mint version which won the first award for Fiona. She had joined Deliciously Yorkshire (the regional food group for Yorkshire & Humberside) to help her with marketing and product testing, and in her first year her Mint Thins won the Confectioner’s award.

Fiona sells her Botanical Chocolates at Farmers’ Markets and food fairs around the county and across the UK, as well as directly and via her website (www.scioltichocolates.com), but they are also to be found in boutique hotels and independent retailers as word has spread and interest has grown. Press coverage about the award has attracted a lot of interest and in addition, Fiona recently took part in a Channel Four programme called The Secret Supper Club which was broadcast in early February.

Customers also come direct to Fiona for custom made chocolate wedding platters which can be used instead of a cake and with requests for specially themed gifts and boxes. As far as Fiona’s creativity is concerned she feels she has only touched the tip of the iceberg. “I have endless ideas for flavours based on teas, honeys, fruits and herbs as well as my ambition to introduce an Italian range,” she said, “and the more I experiment the more I realise the boundless natural flavours there are for me to discover”.

This year will be a busy one for Fiona as she creates a new website and establishes the Sciolti name across more of the county and indeed the country. The panel below tells you where you can purchase Sciolti Botanical Chocolates in Lincolnshire, or you can visit her website at www.scioltichocolates.com. Or alternatively ring Fiona direct on 07927 028734 to place an order.

FIONA ON FILM
Channel Four’s ‘The Secret Supper Club’, hosted by Olly Smith visited Lincolnshire last October. The format of the new show (which replaces ‘Come Dine With Me’) is that two local food heroes entertain invited other local producers to a secret location for a three course meal which celebrates the region’s food. In Fiona’s programme the secret location was the windmill at Kirton-in-Lindsey where Fiona served up the osso bucco beef main course after a starter of locally produced goose sausages with Fiona’s Sea Buckthorn jus; while Olly cooked a bread and butter pudding using Lincolnshire Plum Bread and Fiona’s own marmalade! The episode featuring Fiona and the windmill at Kirton was broadcast as the first in the new series, on 5th February and is available to view on Channel 4oD.