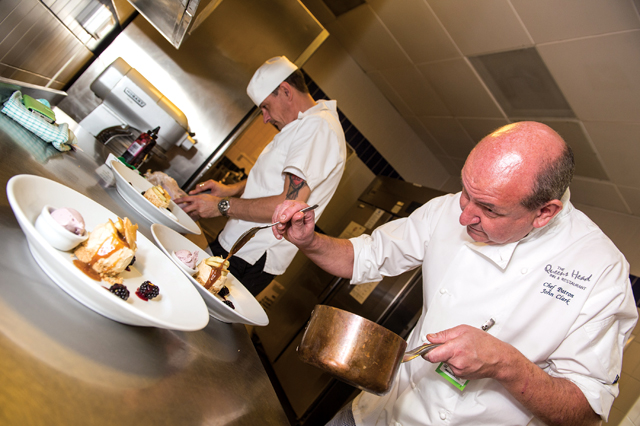 All go in Lincolnshire’s kitchens.
October was a very busy month for us. Not only have we been making the final arrangements for our awards evening at the Oaklands Hall Hotel on 12th November, but we also held our first Chef of the Year competition, which took place at RAF College Cranwell. And by the time you read this, we will have also hosted our Young Chef competition – so it has been food galore this month. We also have a new sponsor, Lindsey James Ladieswear, and you can meet Jan and her team in our December issue.

Our Chef of the Year competition was held on 5th October. We were extremely lucky with our backdrop of College Hall at RAF College Cranwell, and received fantastic support from both the RAF and their catering contractors ISS Defence. Our nominated chefs were: John Clark from The Queens Head Inn & Restaurant, Kirkby La Thorpe; Marc Harvey from The Comfy Duck at Oaklands Hall Hotel; Rosie Dicker from The Livesey Arms, Ludborough; Nick Reed from The Sebastopol Inn, Minting and Adrain Roj, ISS Defence Chef based at RAF College Cranwell.

The kitchens were busy from the arrival of the first chef and the tension was mounting before the chefs had to serve a three-course meal to a panel of judges.

Our judges were Caroline Bingham, our Chief Executive, Commandant Air Commodore Chris Luck and his wife, Sarah Luck, Mark Newton, Managing Director of Freshtime who are the sponsors of the Chef Award and Steve Durham, a Lincolnshire food blogger and private chef.

Under the iconic backdrop of The Colours, the judges sampled food from some of Lincolnshire’s top chefs.

The meal was served by two RAF Caterers, SAC Emma Murden and SAC Jack Boddy, who had come from RAF Waddington and an ISS Steward, Martin Ogle who ensured the day ran smoothly.

In our December issue you will get to meet all of our winners and finalists in our Taste of Excellence supplement, but in the meantime you can catch up with everything that is happening on the night on our social media pages, Twitter @LincsLife #TasteofExcellence and facebook Lincolnshire Life Magazine.

John Clark
John was born into a farming family from Epworth, North Lincolnshire, so understands the importance of fresh local produce.

On leaving school he enrolled in a catering course at Scunthorpe’s North Lindsey College, after which he worked in and around the Yorkshire region.

After several years of successfully running restaurants, he decided to return to higher education, completing a university course in hotel management, which involved work placements in France.

After returning to the UK, John decided it was time to venture into business once again and searched the country for suitable premises. His home county of Lincolnshire was beckoning, and after much searching he found The Queens Head, Kirkby la Thorpe.

Marc Harvey
Marc took a keen interest in catering from a young age, helping his mum and baking in his spare time. His father was a chef in the RAF and Marc used this as his inspiration. At the age of sixteen Marc went to Grimsby College to study catering and hospitality, and convert his interest in to genuine skills.

After college Marc began an apprenticeship at Kenwick Park where he was able to work his way up the ranks, leaving after ten years as the senior sous chef. After a brief spell out of catering, Mark returned as head chef at Louth Golf Club, before getting in touch with Steve Bennett at Oaklands Hall Hotel, where he has been since May 2014.

Nick Reed
Nick has been a chef all his working life and indeed was working in a commercial kitchen whilst still at school. He started his first full-time job at The Plume of Feathers, Tewin in 2000 and in 2001 moved to the 2 AA Rosette Westover Hall Hotel in Milford-on-Sea as Chef de Partie.

In 2002 he accepted a role at the 2 AA Rosette restaurant at the Bush Hall Hotel, Hatfield where he gained promotion to Senior Sous Chef.

In 2006 he was asked by a friend to join him in setting up Hertford brewer McMullen & Sons’ first gastropub venture at The Blue Anchor, St Albans. Originally working as sous chef, he took over as head chef in 2007.

In 2010 he left to take up a role at The Swan, Southrop before taking up the head chef position at The Red Lion, Yardley Hastings

In May 2011, he and his parents purchased the boarded-up Sebastopol Inn in Minting with the aim of using Nick’s knowledge and experience to bring it back to life as a top destination dining venue.

Rosie Dicker
Growing up in rural Lincolnshire, food and catering was something that Rosie found herself “falling into”. Her first position was front of house, however it was the kitchen that really caught her eye.

After two years of training and learning a more advanced skill set, Rosie moved away from the commercial kitchen and onto a new adventure, working as a personal chef to Sir Joseph Nickerson.

Her passion for producing quality food combined with her husband’s vibrant personality led them down a new pathway and the new adventure of ‘gastropubs’, renovating a rundown Lincolnshire local. Having seemingly gotten to grips with good quality ‘pub grub’, they again set their sights on another venture, this time taking on Alfred’s in Louth.

After having a break from the commercial kitchen, she launched Rosie’s Kitchen, an outside catering and pop-up restaurant company based around the Lincolnshire Wolds. With the fire relit and the passion for flavour and food as strong as ever, Rosie moved on to her latest venture, reopening The Livesey Arms.

Adrian Roj
Adrian, originally from Poland, joined the ISS Defence team in 2012 as a kitchen porter at RAF Cranwell. After a short while, Adrian began training as a chef and passed his NVQs to become fully qualified. He is a very skilled, self-taught chef who is certainly one of the key members of the ISS culinary team within the College Hall kitchens at RAF Cranwell.

Adrian, who is married and lives in the village with his wife and two daughters, was very much looking forward to showcasing his culinary skills at this year’s Lincolnshire Life Chef of the Year competition. And Adrian certainly wasn’t alone in the kitchen, as a team of ISS and RAF chefs and stewards were on hand to help him prepare his dishes ready for the judges.

ISS are the contractors at numerous RAF stations and Army barracks across the UK, providing all catering, retail and leisure facilities at each station. This includes chefs, clerks and stewards in the Officers’, Sergeants’ and Junior Ranks kitchens, retail and bar staff in the various SPAR shops, Starbucks and Costa Coffee facilities on site, as well as cleaning staff and general catering administration. The ISS Defence team are proud to be working alongside the military, serving all personnel, friends and families at each site.