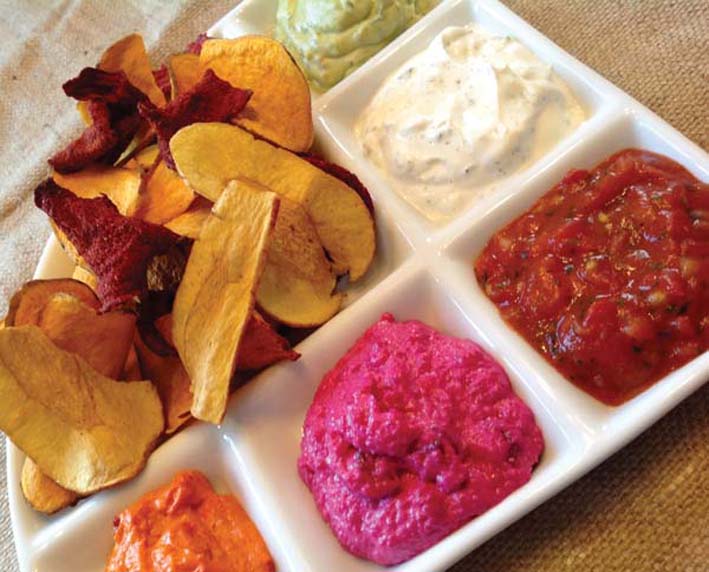 Crisps for the connoisseur

Until quite recently, I thought all crisps were, well, just crisps – you know, the savoury snack in little packets and, of course, made from potatoes, what else?
How wrong I was. Perhaps there are many more like me that have yet to discover how the world of potato crisps we have all known for a lifetime has changed – and I certainly mean changed. Even the name of the product has diversified, from the time honoured ’potato crisps’ to something of a new order in the savoury snack market. We now live in the era of ’vegetable crisps’ and, in the case of one local Lincolnshire producer, it makes for quite a remarkable story and achievement.

I met up with the founders of Scrubbys vegetable crisps at Uncle Henry’s Farm Shop, on the A15 near Grayingham. Husband and wife team, John and Claire Brumby explained to me straight away that their trade name of ‘Scrubbys’ was derived from a description of the basic product (which gets an initial scrub), together with the letters at the end of their surname. The meeting place, too, was no chance happening, for John is a long-standing friend of Steve, the proprietor of Uncle Henry’s. They have a shared passion for the sport of hockey. The venue also serves as an important trade outlet, being the first of now over 400 stockists for the Scrubbys products.

John and Claire are presently enjoying huge success with the seemingly meteoric rise in popularity of their brand of vegetable crisps. I was quite surprised when Claire told me that the Scrubbys brand name had only been established fifteenth months previously. It came about as a result of intensive market research carried out by the couple throughout the locality. By means of initial forays into Beverley market, with trials of various vegetable products, they asked the public about their personal interests in finding healthier snacks.

The whole emphasis throughout has been on healthier eating and John carefully studied their research results. He did his homework well and amazed me by informing me of the current figures for the crisp industry nationally. The UK crisp market is worth a staggering £2.6 billion and of this the vegetable sub-section is worth £40 million and steadily growing. John and Claire recognised that there was an opportunity to join an expanding market and so they started their own business and brand name.

With such a huge demand for crisps nationally, the Brumbys were primarily concerned about the fat content. Determined to address the problem they discovered a new technique with low temperature frying and the use of high oleic sunflower oil, which is obtained by cold pressing sunflower seeds. This special oil contains high levels of vitamins A, D and E, lecithin and Omega-9 along with abundant quantities of monounsaturated fats. Sunflower oil contains more than 80% monounsaturated fats with less than 20% saturated and polyunsaturated fats. Essentially this means that the product contains more ‘good’ fats and less of the ‘bad’ fats.

Their current policy is for the manufacture of vegetable crisps only, but not potato crisps. Beetroot, carrot, sweet potato and parsnip are all made to a special recipe and well worthy of the description on the packets – ‘vegetable crisps with character’. The vegetables are sliced with their skins still on and cooked to a secret recipe with a light seasoning of sea salt. The finished product is gluten free, with 30% less fat and at least 18% fewer calories per 100g. The size of each crisp is larger than average and this lends itself to a multitude of ideas, such as their use as canapés or served with dips.

The packaging of Scrubbys’ products is also worth noting for its eye-catching design and serviceability. John told me that with the foil lined packets they had got it right from the word go and that it had proved to be a winner with its information display, along with recipe ideas and competitions.

Claire told me how their success had grown in such a short time. Since January this year, the company has been listed with four national distributors along with Harrods and Fortnum and Mason. The Lincolnshire Co-op has expressed great interest in their product being gluten free and the product has been shortlisted in the FreeFrom gluten Awards. Such recognition comes on the back of Scrubbys being the very first company to introduce gluten-free vegetable crisps. Claire herself has been a winner in the Viking top 100 ‘mumpreneurs’ – a fitting tribute to a very hard working and extremely busy mother of three who still manages to run a very successful business. Further accolades came in May this year with the announcements that Scrubbys had achieved runner-up status in the North Lincolnshire Awards for New Business and with the HBP Systems Innovation Award. Both were presented by the Hull and Humber Chamber of Commerce.

Achievements have been coming thick and fast for the Brumbys since their launch into business. Their services and supply of products were requested at the unveiling of the new Formula 1 McLaren Mercedes at the Paris Motor Show. TV has also played host to this dynamic duo. They have appeared on the Chris Evans Breakfast Show, where they were engaged in a discussion about the emergence of vegetable crisps onto the market. They have also had a request from the Houses of Parliament for the supply of their products. In recent months more and more restaurants have realised the potential of using Scrubbys products by way of specialist garnishes and other gastronomic art forms.

I asked them both what their wider plans were for the future. Success builds on success it would appear and the pair have an eagle eye on the ever-expanding export market. They already have a distribution centre open in Ireland, with three more coming very soon. Lessons are being learned all the time and after a complete sell out at the last Malton Food Festival a healthy and ever-increasing supply is the name of the game. John and Claire are forever involved in attending farmers’ markets, trade fairs and shows, festivals and any other events that come along. Their short-term aim is to develop a full range of products and to extend their listings to more health food stores. With their development of a larger crisp with a different flavour and texture, it is my belief that this can only heighten the creativity involved with the preparation of specialist canapés, dips and side orders. A book of inspirational ideas would seem to be a natural progression from here.

John and Claire Brumby are certainly not short on ideas. They have come a long way in a very short time and all the signs suggest that they will continue the same way. They are to be congratulated on what they have achieved so far. We wish them well for the future.