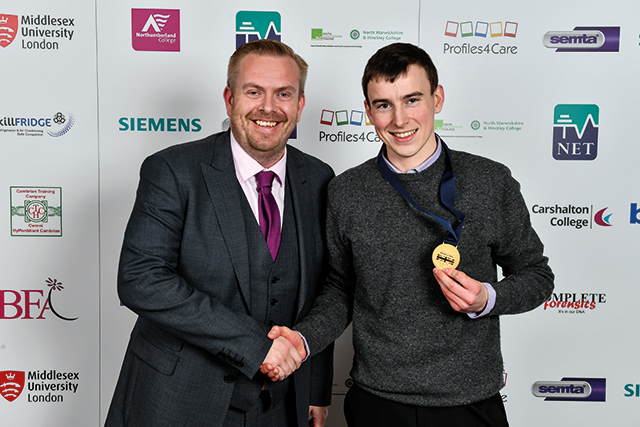 With two national awards to his name in 2017, it was a year to remember for Lincolnshire butcher James Taylor. He tells Kate Chapman about his passion for locally sourced produce.
James, a Q Guild Butcher and apprentice of Simpson’s Butchers, was named Young Butcher of the Year in the National Butcher’s Shop of the Year Awards 2017 and just a couple of weeks later went on to win the UK WorldSkills Butchery final 2017, held at the NEC in Birmingham.

The 21-year-old, who hails from Rowston, was also honoured to represent the UK earlier in the year in the International Young Butcher Competition, held in Austria, where he placed 9th out of twelve competitors.

James, who joined Simpson’s Butchers as an apprentice five-and-a-half years ago, is rightly proud of his achievements and is now looking forward to the exciting opportunities awaiting him this year.

“I was delighted to win both these awards. It’s nice to be acknowledged for your job – work is one of the biggest parts of your life, so to be able to say that I am one of the best in the country at my job, well I’m incredibly proud to say that,” says James, who grew up on his parent’s arable farm where he still lives.

“It’s really special to have achieved it at such a young age, and whatever I decide to do with my career, I’ve given myself the best possible start.

“Since winning the competitions I have been asked to do some demonstrations, so that’s definitely something I’m keen to take up, as I enjoy sharing what I do with other people.”

James started his apprenticeship at Simpson’s Butchers under the mentorship of Gary Simpson, who owns six shops in Sleaford, Heckington, Lincoln, Spalding, Stamford and South Hykeham, after leaving school aged 16.

“Butchery was something I seemed to fall into really,” recalls James. “I started doing a few days for Simpson’s in the Easter holidays and they offered me work in the summer break, which went on into September and that was it really, then I started my apprenticeship.

“It was all hands-on, learning on the job. Assessors would come out and visit me in the workplace and then I went in to college for a few days to take part in some classroom projects.

“I started off with the more basic training, learning how to serve customers and getting to know all the different meats and cuts in general, and then Gary trained me how to bone out a carcass and all the more technical aspects of the job.”

It was Gary who put James forward for the Young Butcher award, for which he has been a runner-up twice in 2015 and 2016, before lifting the crown last year.

“Gary said to me in 2015 he was going to put me forward for this, he’s always been a good boss, always pushing and encouraging me,” adds James.

“You have to send in a detailed application and then the judges whittle it down to three finalists, who they come out and visit in their shops and spend the day watching them do their job.

“They were quite friendly and watched me working, and then they questioned my knowledge about butchery, and asked where the future might take me. You just try to give the best answers you possibly can.

“After the previous two years of being involved, I was prepared for what to expect.”

Just a couple of weeks after his first win, James scooped his second national award when he was one of six finalists in the WorldSkills Butchery contest.

The group was each presented with a series of challenges which included producing ready-to-eat meals, a sausage-making and barbecue section, a kitchen-ready round, boning and seaming and creating an aesthetically appealing display.

After two days of intense competition James was crowned overall winner and presented with a gold award.

“This just topped off a really good couple of years for me,” said James, who mainly works in Simpson’s Lincoln shop.

“We do not seem to see so many young people joining the butchery trade these days and I certainly haven’t since I joined, which is a shame as there are so many opportunities.

“It’s an important job too, as a lot of people like to know where their meat comes from now, and that it has been locally sourced; and I agree, I think that’s really important and that people should know where what they are eating comes from.

“Gary is always trying to source meat as locally as he possibly can, and it’s nice to be working with produce from local suppliers day in day out.

“Here in Lincolnshire we have lots of great food to champion such as our Lincolnshire sausages, haslet, pork pies and Lincoln Red beef, and it’s great to be able to point those who are perhaps not so familiar with them in the right direction.”

And as for the future James is keen to keep doing what he does best.

“I would like to keep progressing within Gary’s company, over the last few years he has been expanding the business and it’s nice to be part of that. I can’t really see myself working for any other butchers. We get on really well, I’ve had good experiences here and Gary’s done so much for me during the past few years,” he says.

“There are six Simpson’s shops now, so there are lots of opportunities here and plenty of different jobs to keep me busy.”

James’ mentor and boss Gary added: “James has been working for us for five years now, and to win the two top national awards in the space of two weeks is an absolutely fantastic achievement.

“It’s a great accolade for him and testament to all the hard work he has put into getting this far.

“As well as James’ hard work it also underlines Simpson’s commitment to young people in the industry by giving them the skills to succeed. We are all very proud of his achievements.”