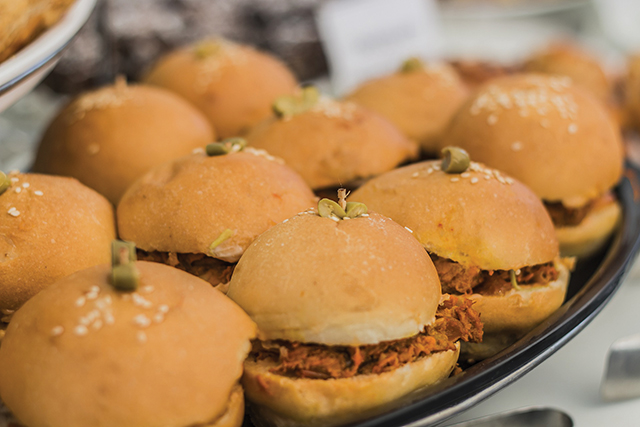 Place the aubergines whole in a greased baking tin, cover with foil and put into a preheated oven and cook for approximately 30 to 40 min at 200°C (turning halfway through). Or you can grease the aubergines with vegetable oil and cook them on the grill or barbecue, turning them regularly to make sure they don’t burn.

Once the aubergines are cooked leave to cool and then remove the skin.

Heat the oil in a heavy based frying pan.

Cook the onions until soft, for around 10 min.

Add the cinnamon, cumin and paprika to the pan and cook for around 2-3 min.

Add the cooked aubergine and stir.

Add the Tabasco, vinegar and BBQ sauce and mix well.

Add the passata and 200ml water. Leave to simmer gently, covered, for 30 min stirring every 5-10 min to help break down the aubergines, then take the lid off and cook a further 10 min.

Check texture and season to taste.

Use a fork to shred the aubergine before serving. This sweet and sticky dish can be served in soft-baked baps (sliders) with a dollop of sour cream and freshly chopped chives, or serve it with salad, rice or couscous for a fabulously sumptuous, summery dish. Enjoy!

Foodie fads have been with us for as long as most of us can remember. But there has been a marked shift in recent years towards veganism and the options available are more delicious than ever, as Nikki Bawn finds.
An undeniable movement in eating habits is gathering momentum at a breath-taking pace, and the figures associated with this are astounding.

In the last three or so years, there has been a 350 percent increase in veganism in the UK, and in the US it’s 600 percent! It’s amazing to think that, not too long ago, us Brits were once reported as eating twice the amount of meat on average than the rest of the world. Now, what was once thought of as a ‘fringe’ plant-based diet movement is becoming very much mainstream.

The tidal wave of change being driven by increasing concern for the environment, health and animal welfare means chefs and their dishes are having to adapt. The stereotypical sock and sandal-wearing brigade who supposedly loved soya protein, nut roasts and broccoli bakes are all a thing of the past. In fact, serving this kind of fare to discerning diners is all a bit ‘old hat’ that simply won’t cut it when it comes to demand for delicious meat free options.

You don’t have to be veggie though to be tempted by the rising stars on some menus and recipes lists, like rustic ratatouille or spiced sweet potato and apricot tagine. Dishes like these taste good and meat lovers choose them over their usual favourites because they’re so tempting. An array of other menu showstoppers is becoming increasingly popular that I think most will want to order or make and eat, time and again.

I don’t eat meat daily so, for succulence and meaty texture, lentils, sweet potato, squashes and aubergines are some of my ‘go to’ ingredients. One of my favourite summer dishes is pulled pork style aubergine. It’s decadently sweet and sticky and will satisfy most palates and appetites, and it’s a great reminder that meat free days don’t have to be boring. There are endless choices of plant-based dishes that deliver on nutrition and flavour and even die-hard meat eaters would find them difficult to resist.

Us Lincolnshire folk are spoilt for choice with artisan farmers and suppliers dotted all over our county and it might come as a surprise to you to know that around 30 per cent of the UK’s field vegetables are produced by our lovely farmers!

Whether you’re a carnivore or veggie, creating menus based on seasonality and availability and using home-grown, foraged and local produce will always deliver on freshness, taste, nutrition and quality. Buying local is better for the environment too because it travels less distance – so what’s not to like? So, if you fancy something a little different, why not get down to your local greengrocers, or raid the veggie patch and get cooking your own legume extravaganza!