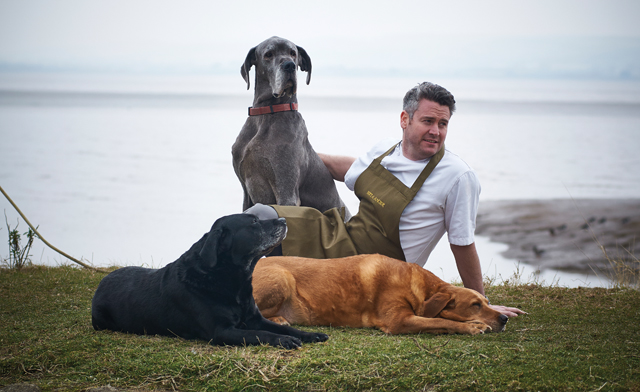 Family friendly hostelry on the Humber

LINCOLNSHIRE LIFE READER OFFER
10% off your meal at the Hope and Anchor (the offer does not include drinks).

Please mention Lincolnshire Life Magazine when booking or before placing your order.

Caroline Bingham went to meet Colin McGurran as he launches his new venture, the Hope and Anchor at South Ferriby.
The celebrated Winteringham Fields Restaurant with Rooms has remained one of the best in the country since Colin McGurran bought that business ten years ago from founders Annie and Germain Schwab. Even if you have not visited Winteringham Fields you may have seen Colin in one of his many TV appearances as a celebrity chef on Great British Menu or Saturday Kitchen.

Colin is a champion of locally grown and sourced ingredients; much of the produce used in the restaurant is grown in its own adjacent gardens, the meat reared in the surrounding fields and game sourced from local shoots.

As if running an award-winning restaurant, competing in menu challenges, writing and filming weren’t enough to keep him busy, Colin last year bought the Hope and Anchor pub at South Ferriby and began a half a million pounds refurbishment; the first step in reopening a pub closed by the tidal surge of December 2013.

“This location is fantastic,” explained Colin as we admired the panoramic view from the dining room and terrace, across the Ancholme inlet and the expanse of the Humber estuary beyond. “I have always liked the idea of owning a simple, family friendly pub, where walkers, bird watchers, dogs and kids are all welcome to come and enjoy some great but affordable food.

“My brief to the interior designers was for a nautical/driftwood theme which would make a cosy retreat in winter, with real fires, natural textures and materials to complement the shoreline landscape and views.”

A team of twelve will run the Hope and Anchor, with front of house led by manager Amy Heward and the kitchen by head chef, Peter Garlick. Amy and Peter have both worked for more than four years at Winteringham Fields and the rest of the team have been trained there. “I have been able to recruit an enthusiastic team locally who are keen to see the pub open now,” said Colin.

This was done officially on 22nd March and the opening menu offers a straightforward selection of starters, mains, sides and desserts plus a steak and grill choice.

“I have the same philosophy for the dishes at the Hope and Anchor as I have for Winteringham. Take a quite humble ingredient and make it great,” continued Colin. “Our steaks are stored in an Italian purpose-build cabinet which keeps the joints at exactly the correct temperature and humidity to age them perfectly. We shall just trim them and cook them over a wood burning grill. Simple yet delicious!”

All the breads are homemade on the premises, served as part of the starter options along with Grimsby haddock chowder, with poached hen’s egg; ham hock and pear terrine; French onion soup or fried fishcake, pea puree with a fennel and pea salad. See the website for full menu options, as there are eight dishes to choose from on each course plus daily specials.

Desserts include classics such as profiteroles with Chantilly cream and chocolate sauce; sticky toffee pudding; treacle tart and rhubarb trifle.

There is a wide selection of beers, wines and soft drinks to accompany your meal, including Tom Wood ales.

If the view across the Humber is too misty then the cold seawater tank of native fish which divides the main bar from the dining area gives mesmerising focus for the interior.

“Our nautical theme has also extended to the lovely tableware and glassware for the food and drinks, to complete what I hope will be a great new pub for North Lincolnshire,” said Colin, “and just a heads up to call us to book, as the initial response has been very encouraging.”

Colin also mentioned that he is working on his first cookbook, which should be available in the early autumn; continuing with the refurbishment of rooms at Winteringham and planning four rooms above the Hope and Anchor next year. He has also had to decline an invitation to be part of the next series of Great British Menu. I think we can all understand why.