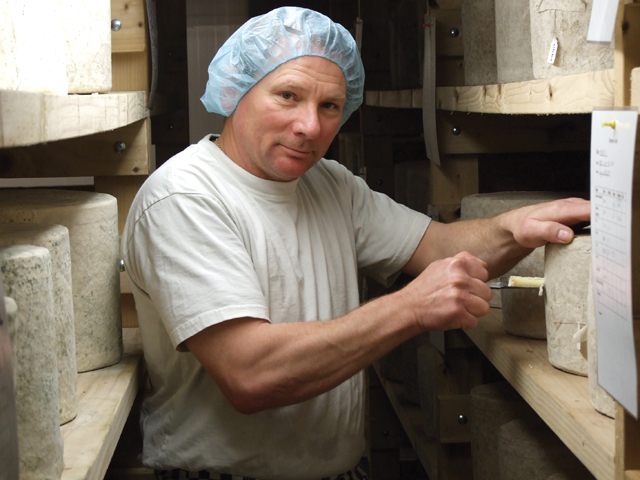 Family’s cheeses are ‘Just’ the job

Situated in a very secluded and difficult to find location, my first encounter with Lymn Bank Farm had me thinking that this was not the very busy and thriving cheese factory that I had imagined.
I soon found out, however, that the whole exterior of this attractive period property belies the fact that it is a manufacturing outlet that positively hums with industry.

I met up with Gemma who explained to me that the family business of cheesemaking had been going on here for the past nine years, but the family had lived here for two years prior to that. Her parents, Stephen and Helen Grinstead founded the company with the workforce now including Gemma and her brother Matthew – who has drafted his fiancée into the fold now as well! Their original foray into cheesemaking was initially by way of a hobby and they used part of the outbuildings’ set-up as a smokehouse. Eventually, the activity began to take on more serious aspects and the launch into full-time cheesemaking became inevitable. For Stephen it must have been something of a major career move because prior to making cheese he worked as a blacksmith, applying his skills within various outlets including English Heritage.

I was brought up to date with the layout of the farm buildings by Gemma who pointed out that the property and surrounding outbuildings are at present under a very involved refurbishment and extension plan. It soon became apparent to me that this is a business that really is going places, with new areas being created to house new pieces of equipment to help satisfy the ever-increasing demands for cheese and other products.

In addition to the eighteen different varieties of blended cheeses available, Lymn Bank Farm produces an excellent chutney, as I found out whilst watching Helen at work. Helen was attending a huge gas cooker on which sat eighteen very large pans of wonderful ingredients all bubbling away and smelling absolutely delightful. Each of the pans holds the contents for one batch of eighteen jars. Everything is done here in the time-honoured way, with every stage being handcrafted, and with the final product really underlining the term ‘homemade’.

Gemma explained to me that only the finest ingredients, all locally sourced, go into the preparation of all their cheeses and they always take on board the feedback from consumers – along with many suggestions for new flavours and ideas! The range of blends produced here is quite mind-bending, with flavours guaranteed to lift the most jaded palate. I learned of cheeses made with horseradish, lemon, ginger, mango and cranberry, a traditional apple smoked cheese and even an apricot chilli and lime variety. Cheeses with names like ‘Brewers Choice’ and ‘Two Smoking Barrels’ seemed to positively demand a taste test. It is well worth bearing in mind that a really superb cheese platter can now be prepared with all produce supplied from this Thorpe St Peters outlet. Artisan cheeses, too, are produced here with lots of local interest having been shown in the only pasteurised Brie to be produced in Lincolnshire.

It’s not every day that a new cheese is introduced but the Lymn Bank Farm producers are, it seems, already old hands. Skegness Blue has been launched quite recently to great acclaim and this has been rolled out in tandem with the new Skegness Gold. This is certainly proving to be a winning double, as the Skegness Blue, along with the Black Cracked Pepper both won bronze medals at the British Cheese Awards in Cardiff 2012.

I was particularly interested in the large store of full-size cheeses (called truckles) sitting on long shelves that were full of them, all labelled and ‘bandaged’. It was fascinating to hear how they are all stored for differing lengths of time, some taking well over a year to mature. Every day they are inspected and inverted, this being just one part of the ongoing process.

The Grinstead family has also put a lovely twist on cheesemaking by coupling it with charity fundraising. The idea has been put into practice here to help with the renovation of ‘Just Jane’ – the Avro Lancaster bomber based at East Kirkby and which last flew in 1970. ‘Just Jane to Fly Again’ is the trade name of a lovely small cheese truckle bearing a picture of the aircraft along with a description of the idea on the label. A premium of 8.5% on this special cheese is donated to the renovation scheme.

Lymn Bank Farm supports all the local events and their marketing policy provides for the distribution of the company’s products to all corners of the UK, as well as some other destinations in Europe. Farmers markets, village fetes, craft fairs, competitions and county shows all figure prominently in the sales and advertising campaigns. Recently, the company has joined forces with Pocklingtons, a local bakery, so that produce may be distributed to many local farmers’ shops, and the Co-op has become an outlet for some of the cheese lines too. Listed under ‘Love Food, Select Lincolnshire’, this business is certainly an expanding concern and when I asked Gemma if there were any plans for further products to be released in the near future she told me that there would always be scope for new ventures. The idea of smoked Brie had been put forward a while ago and as for the possibility of a chocolate and orange flavour blended cheese – now, there’s a thought!