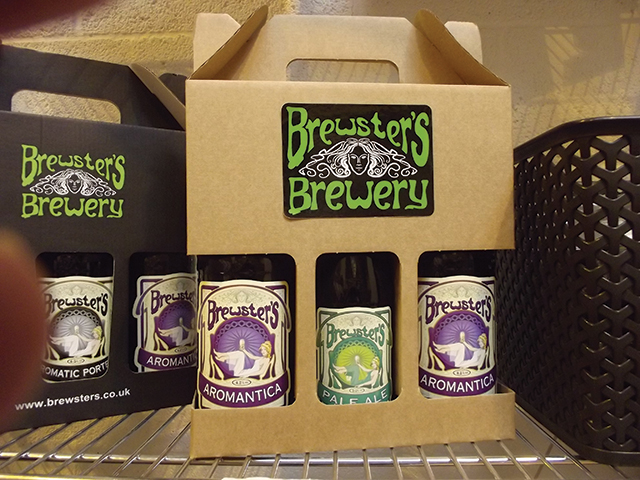 First pint of many

Until Jane Keightley visited Brewster’s Brewery in Grantham she had no idea that ‘brewster’ is the medieval term for a female brewer.
Women have been brewing beer since Babylonian times and until the Industrial Revolution most brewers were actually women. Indeed it was a German nun who discovered that adding hops to beer would help preserve it and make it last longer, thus leading to the development of beer being brewed on a more industrial scale. Once this happened women began to be excluded from the industry.

Nowadays, with the rise of microbreweries, it has come full circle and there are more and more women getting involved in the brewing process.

I had come to Brewster’s to meet Sara Barton who is passionate about women in brewing and has set up Project Venus which brings women in the brewing industry together. Sara had read about The Pink Boots Society in America, which brings women involved in the brewing industry together. They had done a collaborative brew called Project Venus and Sara liked the idea and decided to try something similar in this country.

It all started with a group of friends gathering together to brew a collaboration beer. They came up with a recipe and launched it at the Rake beer bar in London and it grew from there. There are about thirty members and they get together periodically to collaborate on brews. Sara told me that she feels that it works well as a support network and that it also raises the profile of women in the brewing industry. They have now brewed twelve beers including the Unite beer which was a collaboration with sixty brewers around the world brewing on International Women’s Day.

Sara set up Brewster’s in 1978 and in the intervening years microbreweries have become more and more popular but she is still one of the most respected names in the business. Indeed she won the ‘Brewer of the Year’ title, awarded by the British Guild of Beer Writers, in 2012 and Brewster’s have won numerous national beer awards and won gold and silver medals at the prestigious International Brewing Awards in 2015. She has also been featured on Jamie & Jimmy’s Food Fight Club with her Brewster’s Pale Ale and has a book about beer dedicated to her by Jane Peyton, who runs the School of Booze in London.

I was interested to find out how Sara got into brewing in the first place and she explained to me that she had joined the brewing industry back in 1987 with an MSc in Brewing and Distilling from Heriot-Watt university in Edinburgh. After this she worked for Courage for several years. However, it was a very industrialised process and Sara really wanted to be hands-on with the brewing process, so she decided to run her own brewery. In 1998 she came to Stathern, a small village in the Vale of Belvoir and started brewing beer in a barn behind her parents’ house. With lots of support from the local pub, the Red Lion, who were happy to support such a local beer, she went from strength to strength. These days Brewster’s beers are stocked at many local pubs including Sara’s own pub the Marquis of Granby in Granby near Bingham in Nottinghamshire. The second beer that Brewster’s produced was called ‘The Marquis of Granby’ and was brewed specially for a television programme about John Manners, Marquis of Granby (1721 to 1770). Son of the 3rd Duke of Rutland, he had commanded an army in Germany in the Seven Years’ War. He returned a hero and improved his popularity further by giving pensions to his soldiers. Many of them set up pubs with this money, which is why there are so many pubs that bear his name. Sara’s Marquis of Granby pub is thought to be the original one.

In 2006 Brewster’s moved from Stathern to an industrial unit in Grantham. Sara explained that one of the main reasons was that their premises in Stathern were in the middle of the countryside down a long and bumpy country lane, so it made it a lot easier for suppliers to deliver to them on an industrial estate by the side of the A1.

Sara showed us around the brewery, explaining the more technical stuff as we went (my mum was with me as chief beer taster!). Since relocating in 2006 the brewery has gone from strength to strength and in February 2012 two gleaming ‘cylindro-conical’ vessels were added to their ten barrel set-up and you can both brew and condition in these. It all looks very technical but is worth remembering that it is Sara’s knowledge and passion that makes all the difference along with Brewster’s own yeast, barley grown in Lincolnshire and hops from around the world. One of the things that she showed us was a one-way keg. Sara explained to us that these were cost-effective as the other kind are expensive to buy and don’t always get returned. They are disposable, with a plastic bag inside like a wine box. When you have finished with it you depressurise it, by squeezing the air out and squashing it, ready for recycling. The other kind cost £60-£70 a time but these cost £15 although you do not get that back.

I asked Sara about the recipes for the various beers. She said that they started out with quite malty recipes but as the years have gone by they have become more hoppy. Although the more hoppy ones are her favourite she also does the darker ones too, milds and stouts and lagers as well, so there is a pretty good selection on offer. The best way to find out about what she has is to visit her website www.brewstersbrewery.com. I was very impressed with the Art Nouveau design of the website which follows through on everything to do with the business, even the beermats.

A lot of the beers go to local pubs but Sara also supplies to big chains like Wetherspoon’s.

Because of Sara’s knowledge and passion for brewing Brewster’s Brewery is thriving and producing award-winning beers. She is now joined by another brewster called Alice Batham, who has just completed an MSc in Brewing. Sara said that Alice is uniquely placed to understand the demands of a small brewery as she has been steeped in brewing from an early age at her family brewery, Bathams in Dudley. Alice is the sixth generation of her family brewers and it was a lady called Charlotte Batham who started the business in 1800. So the female tradition of Brewster’s is now carrying on into the future with a new member of the team.