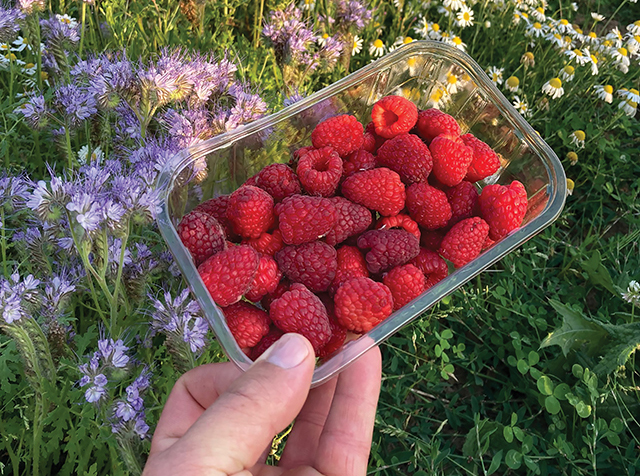 A passion for growing and a desire to see more diverse produce grown in the Isle of Axholme has led to an exciting new venture for Mark Glew and his family, as Kate Chapman reports.

After realising no-one else was producing soft fruits in the area, Mark has started growing his own strawberries, raspberries and currants commercially, on a 2.5-acre plot close to his home in Belton, near Epworth.

As well as the berries, he also planted an acre of sunflowers, which inspired him to start cultivating microgreens after researching what he could do with their leftover seeds.

His tiny range is proving a big hit and has already been expanded to include broccoli, radish and red cabbage alongside edible flowers, all of which is being championed by local chefs, caterers and tea rooms.

“There seems to be a lot of interest, especially as we’re producing more niche items rather than traditional vegetables – there’s plenty of those grown around here already,” says Mark, who is married to Kelly, and dad to Darcey (12), Noah (10) and Amber (5).

“These microgreens are fantastic – they’re packed with nutrients and protein and are very versatile. People are using them as garnishes, to top salads and soups and in sandwiches, the colours are amazing.

“I’ve started putting myself out there and contacting pubs and restaurants about them and people want to know more, with one in particular saying they’ve been waiting for someone to start growing these locally.”

Mark’s family is well known in the Belton area, having lived and farmed there for more than 500 years. His own passion for growing things began as a teenager, when aged 14 he got his first job at a bedding plant nursery, where he continued to work while completing a course in commercial horticulture at Bishop Burton College.

Since then, he’s run a string of successful enterprises ranging from landscaping to lawn keeping and his own firewood company, but he’s always maintained his love of growing things. For the past four years he’s worked on the village farm, previously owned by his great-grandfather, helping to cultivate cereals and potatoes.

He was inspired to strike out on his own again, launching Axholme, after setting up a Facebook group for the area’s farmers where they could come together to promote their crops. When Covid struck he set up another – the Isle of Axholme Local Produce Group – to continue this work and put customers in direct contact with the producers.

“Supermarkets were running out of stock, and people were keen to shop locally, so the group was a great way of farmers letting people know what they had, and it worked really well,” says Mark. “That’s when we realised the Isle lacked a soft fruit producer, so we decided to rent a field in the village and have a go ourselves. That’s where it all started.”

Mark and Kelly took on their plot in October 2020, initially drilling it with a cover crop of black oats and phacelia.
“In March we planted 8,000 strawberry plants, 900 raspberry canes, 180 rhubarb crowns, 150 currant bushes and drilled sunflowers in the acre that was left over, growing them all chemical free,” Mark recalls.

“What a year to start growing soft fruit! The coldest and driest April in 60 years meant that we lost two-thirds of our strawberry crop and all of the rhubarb. We drilled the sunflowers late, to miss the late frosts, and now we’re into the wet weather again.

“It was while researching what we could do with the sunflower seeds that we found out about growing sunflower shoots and that led us on to microgreens. It’s a perfect combination that complements our fruit, but also gives us a year-round business. We’ve branched into micro herbs too, growing basil, fennel and coriander as well as edible flowers like violas and next year we’re hoping to add borage, cornflowers and even dandelions to our range!

“It’s also given us a definitive customer base – including chefs, caterers and tearooms. We were unsure about our main market when we started renting the field, but it’s all starting to fall into place.”

To date, Mark has been selling his produce through word of mouth and social media, particularly Facebook, where he runs a page for customers to follow and contact him. Local deliveries are also available in the Isle area and Mark is planning to build a small stall outside his home. He is also supplying venues including The Epworth Tap, Hatty’s Tea Room and The Pantry 8020, plus its new wedding venue Wootton Hall, all in the Doncaster area.

“I absolutely relish meeting chefs and love to see their enthusiasm for our quality, local produce. It really is inspiring. And it seems for many we’ve hit on the right idea at the right time.

“The hope is to keep developing and trying new things – I’m open to new ideas and want to hear what people want us to grow.

“Another new thing we’re trying is garlic, we’re getting ready to plant it this month. It’s something that hasn’t been grown commercially in the Isle as far as I’m aware, but it seems to be a good choice as loads of people seem interested in it, so we’ll see how it goes.”

The business has become a real family affair with Kelly helping to process and deliver orders while the couple’s children are also keen to be involved.

“The children love to help and a lot of what Kelly and I do is with them in mind. With being a little older, Darcey is really interested in what we do and is desperate to come out and meet some of the chefs with me, which is lovely.

“Hopefully there will be a nice little business for them to carry on when the time comes.

“So far it’s working out well as consumers want locally grown produce – they want to know where it’s come from, whose grown it, that it’s fresh and that it hasn’t travelled hundreds of miles. It’s great being able to combine my love for our family, the Isle, local agriculture and horticulture all in our amazing little company – and all this while helping out on a local farm that used to belong to my great-grandparents.”